Remembering the voice of conservatism 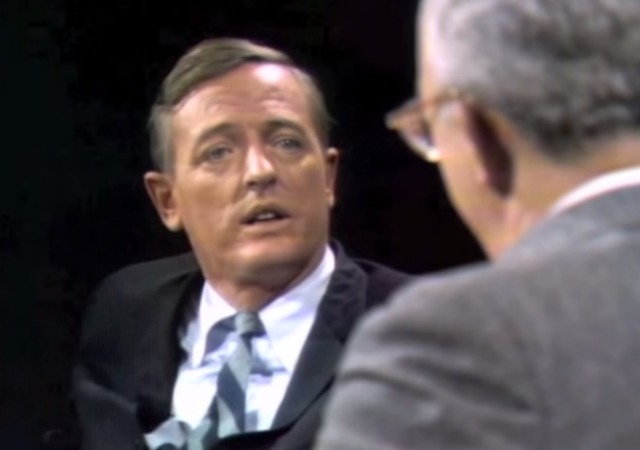 The man who molded and formed modern Conservatism would’ve been 89 today.

When I first came round to Conservatism a few years ago, I spent hours upon hours watching and reading Buckley. Never have I seen someone so skillfully disarm statist arguments white creating the intellectual and moral case for conservatism. He is my hero.

On Firing Line, WFB sat down with ideological adversaries, whack jobs, Hollywood hot shots, and the likeminded and managed to have civil, honest debate which highlighted differences of opinion and consistently and eloquently define Conservatism. Mostly civil anyway, minus the infamous “crypto-Nazi” debate with Gore Vidal at the 1968 Democratic Convention, which was not an episode of Firing Line.

It’s hard to pick one moment from Buckley’s incredible career. But today, I’ve somewhat selfishly included one of my favorites. A seersucker clad Buckley interviews a plastered, annoyed, and disruptive Jack Kerouac, the Fug’s Ed Sanders and a member of the academy, Lewis Yablonsky who took LSD as research for his book, “The Hippie Trip.” It’s a fascinating snapshot of the counter culture intelligentsia of the 50’s and 60’s.

“The topic tonight is hippies. An understanding of whom we must acquire or die painfully,” Buckley says. Enjoy:

Happy Birthday Mr. Buckley, may we ever make you proud.

I’m always impressed by how Buckley 99.9% of the time is cordial, even with rude guests.

Kerouac is quite an uncouth Philistine.

He was for it. My how times have changed.

I never much cared for Buckley’s arrogant attitude. Maybe it’s the latent hippy in me LOL!

In honor of Wm.

(Hmmm. How can I convince people to support the legalization of cannabis? I know! I’ll call them mass murderers if they refuse their support! That’ll work!)

I always struggled getting past WFBs persona, which I felt was affected, with that somewhat snobby British accent thing leftover from his prep school days, don’t you know.

That accent was no more affected than any American idiomatic speech.

Listen to the interviews of Catherine Hepburn and others of that generation. That is how they spoke. Watch “The Thin Man” and “After The Thin Man”. Yeah, they may have had those intonations polished by a finishing school, but it wasn’t to alienate the rest of America. It was how good language was spoken. Anybody could do it.

“She was criticized for her shrill voice, and so left Baltimore to study with a voice tutor in New York City.”

Her voice is the product of voice tutoring, courtesy of Hollywood, appropos for the time period and industry.

The fact that many people spoke that way doesn’t prove it wasn’t an affectation. I also said nothing about alienating the nation, just me, and I spoke of an affected accent, not of language, good or bad.

I didn’t down thumb you and I still love you.

I said all idiomatic accents are an affectation.

I still love you, too, poopsi…

“Liberals claim to want to give a hearing to other views, but then are shocked and offended to discover that there are other views.” – WFB

Gore Vidal learned not to call WFB a “crypto-Nazi” on TV: