First they came for the cashiers, then the waiters …

First they came for the cashiers, then the waiters … 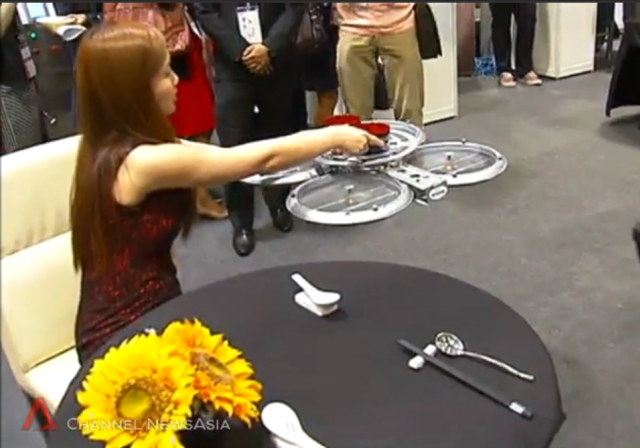 Cashiers aren’t the only workers who might be forced to look for other employment thanks to robots. To help alleviate the current labor shortage, one Singaporean restaurant plans to employ a fleet of robots to deliver food to customers.

According to Channel News Asia:

Restaurant-goers in Singapore can expect to be served by autonomous flying robots – the world’s first commercial attempt – by the end of next year.

Infinium-Serve, the autonomous flying robotic waiters, will be first launched at one of Timbre Group’s five outlets in Singapore. Infinium Robotics CEO Woon Junyang estimated the project to cost a “low seven-figure sum” for the five outlets, subject to final negotiations and certain variables of the actual deployment of the robots.

Mr Woon said he is confident that such robotic solutions will help alleviate the Singapore’s labour crunch. Introducing this technology into restaurants would take away mundane tasks of serving food and drinks, and allow human waiters to focus on higher-value tasks such as getting feedback from customers, he said.

“This will result in an enhanced dining experience which will eventually lead to increased sales and revenue for the restaurants,” he added.

A prototype of Infinium-Serve was showcased to Prime Minister Lee Hsien Loong at the inaugural launch of the National Productivity Month in early October.

Unlike American retail and fast food stores where American workers are demanding ridiculous compensation, Singapore does not have enough workers to fill low income jobs.

According to Bloomberg, the manpower shortage is forcing business owners to look for alternative ways to meet their customer’s demands:

An Association of Small and Medium Enterprises survey shows more than eight in 10 companies are facing manpower shortages, while Singapore’s authorities said they rejected more foreigner work permit applications and renewed fewer existing ones in the first seven months of 2012. The labor-policy tightening and efforts to raise wages for service workers from nurses to cleaners have added to price pressures.

At Pine Garden’s Cake Pte., Wei Chan used to have three drivers delivering chocolate and martini- flavored cakes around Singapore. Now, the head of the company transports the goods himself because he can’t get enough workers.

A government push to reduce the city-state’s reliance on cheap imported labor has led to an emerging shortage of workers and increased business costs. The squeeze has left Chan with only one driver, a Chinese national, after he failed to obtain new permits to replace the other two.

“I can’t accept new orders and my top-tier people are doing the lowest-end jobs,” said Chan, 40, whose managers also fill in for the lost drivers at his family’s 28-year-old Singapore bakery. “I’m fighting for survival and expanding is definitely not on the cards. Productivity is certainly compromised.”

The robots are pricey, with a fleet clocking in at about seven figures. As the technology improves and becomes more readily available and affordable, these little flying machines might be the next fleet of robots to infiltrate low wage jobs.

Drones…is there anything they can’t do?

Yes! They can’t serve me my dinner. Ever. A nice, quite robot, MAAAAybe.

Wait until one injures a diner or smashes through a plate glass window and shuts down the restaurant on a Saturday night.

Or, imagine hackers stealing your dinner right out of mid-air.

Seriously, this will go the way of “burger train” (the automated car-hop of the 1960s).

Drones, like all emerging technologies, have no bounds or limits set, because we’re still discovering their possibilities, and with them, their risks and liabilities.

Wait until one gets ingested by a heavy airliner taking off on a real hot day, putting several hundred folks at risk. Since the first of January, there have been scores of near-misses between aircraft and drones worldwide, many by “hobby” drones flying out of garages and back yards.

When we step back and look at the whole question of drones and their role in the world, we’re seeing a major technological step forward, but as we’ve found with e-commerce, it’s only as good as its resistance to hackers.

I’m not sure that I’d like a hot-steaming quesadilla delivered by one of these drones; that idea (and paying more to your workers instead of importing cheap labor) will not be embraced by American businesses..

So, what are the guidelines for tipping the robotic server? Seriously, that will be an issue, perhaps?

You tip them in machine oil. Very Steam-Punk.

Oh Oh, wait’ll the libs see that. There are two people – male & female – sitting at the table, and the drone goes to the female who has to perform the serving duties. Sexism!!!

On the other hand, can a drone get my pizza to me in thirty minutes or less?

On a more serious note, what about the downdraft from the drone’s fans… blowing napkins around, messing up peoples’ hair, or just scattering the usual dust and debris from the floor?

Aren’t restaurants noisy enough with people trying to talk over each other without having to talk over four or five noisy drones at the same time. A conveyor belt to each table sounds more sensible.