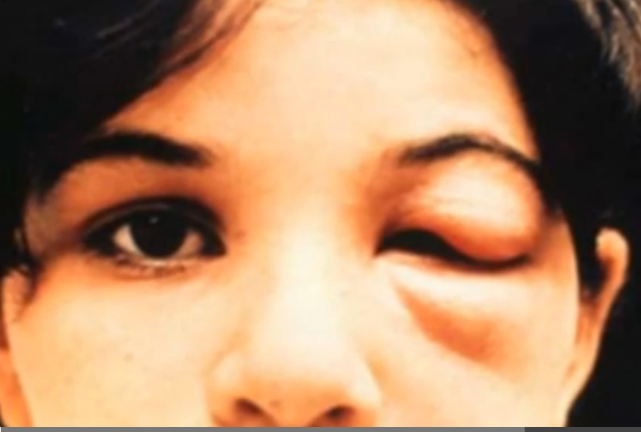 Just as the last remaining US patient with Ebola, Dr. Craig Spencer, is released from New York’s Bellevue Hospital, comes a report that another tropical disease, deemed “the new AIDS,” has already infected 300,000 people and is poised to strike more.

Over 300,000 Americans have already been infected with the potentially fatal ‘kissing bug disease’ called Chagas but U.S. healthcare workers lack of knowledge about the illness is letting many cases of the parasite unnoticed. Some doctors are calling it the ‘new AIDS’ because of the way it develops.

Researchers who gathered on Tuesday at the annual American Society of Tropical Medicine and Hygiene meeting in New Orleans said that if caught early the disease can be cured however sometimes the disease can be asymptomatic and there is a dearth in medication for the condition.

The CDC reports that the initial symptoms of the disease caused by a parasite, Trypanosoma cruzi, which is spread through the feces of kissing bugs includes fever, fatigue, body aches, rash, diarrhea and vomiting. One of the first visual signs can be a skin lesion or a purplish swelling of the lid of one eye.

More details are offered in an IN News Report:

A Scientific American report indicates that the 300,000 cited in the report are “mostly of immigrant background” and “already live with Chagas disease”. However,researchers warn that residents of the southern US may be at increased risk of infection by the parasite.

“We are finding new evidence that locally acquired human transmission is occurring in Texas,” said Melissa Nolan Garcia, a research associate at Baylor College of Medicine in Houston and the lead author of two of the three studies.

Garcia is concerned that the number of infected people in the United States is growing and far exceeds the U.S. Centers for Disease Control and Prevention’s estimate of 300,000.

In one pilot study, her team looked at 17 blood donors in Texas who tested positive for the parasite that causes Chagas disease.

“We were surprised to find that 36 percent had evidence of being a locally acquired case,” she said. “Additionally, 41 percent of this presumably healthy blood donor population had heart abnormalities consistent with Chagas cardiac disease.”

Meanwhile, 18,000 nurses in California are now on strike…in part, because they don’t think that their employer is offering enough protective measures against Ebola:

As many as 18,000 nurses went on strike Tuesday and picketed in front of Kaiser Permanente facilities in Northern California to express their concerns about patient-care standards and Ebola.

The nurses, who are in the midst of contract negotiations, held red and yellow “strike for health and safety” picket signs. The two-day strike was expected to affect at least 21 Kaiser hospitals and 35 clinics and last until 7 a.m. Thursday.

Union officials said nurses are striking over claims there has been an erosion of patient-care standards in Kaiser facilities for months and that the company has failed to adopt optimal safeguards for Ebola.

And while California Hospital Association spokeswoman Jan Emerson-Shea declared that the nurses were using Ebola as a ruse, with the threat of deadly, new infectious diseases increasing, this is one ruse that is based in today’s new healthcare realities.

Is this a new crisis manufactured by the desperate left? Chagas’ disease is spread primarily by a tropical insect; as far as I know it doesn’t spread person-to-person except by blood transfusion. The disease and its cause (a protozoal parasite) have been known for a century (http://en.wikipedia.org/wiki/Chagas_disease).

So I don’t see how it qualifies for “the new AIDS” unless you posit the gullibility of an uninformed and panic-prone low-information subset of the populace (oh…maybe it does qualify…).

Chagas, another tropical disease that crossed our southern border…. somehow.

What other gifts do the new ‘DREAMERS’ bring us?

“Health Condition: In the early 1990s, Chagas disease was ranked as the most serious parasitic disease in Latin America. The disease was endemic in all seven countries in the southern cone, and wavering political commitment and reinfestation of the insect vectors across borders hampered efforts to control disease. Today an estimated 11 million people in 15 Latin American countries are infected with Chagas disease. The disease also plagues northern South America, Central America, and Mexico, as well as the remaining pockets in the southern cone.”

golly, if we didn’t just go ahead and import it into the US that would be both RAYCISS and UNFAIR!

National health care unions, another of the subversive goals of Obamacare.
…“Give us (and our union thug bosses) your wallet, or granny gets a dirty catheter.”

So Team Obama has managed to import 300,000 illegals carrying a disease that Americans are forced by law to treat. Hospitals must accept all comers, and provide an interpreter. Ambulances come from Mexico and drop off their problems, Americans get the bill, border hospitals shut down.

No we are not a nation of immigrants. We are a nation built by self reliant Americans. The (largely) WASPy old families Obama disdains have great-(great)-grandparents that came through Ellis Island type inspections, being turned back for disease or inability to be productive.

But sheltered Obama prioritizes foreign contagions (political and physiological), and holds us accountable for curing their dilemmas. Push will come to shove, and America must lead by example, not by submission. Obama seems to want to open our hospitals to the world, bringing “equality” by destroying our higher standards.

Won’t be long before Obama issues Chagas visas as part of his go it alone immigration reform.

The CDC also noted a strange after-effect of this disease. It appears either due to metabolic changes or the drugs used to combat this disease, most people who recover from it tend to vote for Republicans.

In other news, Obama has ordered tens of thousands of machine guns and several small tactical nuclear weapons be sent to the border patrol near the Mexican border.

You left out the part of the story about obola sending orders along with the guns and ammo to use it to shoot Americans, not illegals.

The disease may also be spread through blood transfusion, organ transplantation, eating food contaminated with the parasites, and from a mother to her fetus.

Only about two thirds of adults are cured with medical treatment.

Chagas disease is a growing problem in Europe, because the majority of cases with chronic infection are asymptomatic and because of migration from Latin America.

Now that Chagas is here we must accept it and provide it a path to citizenship. You people are terrible.

Chagas has been in Texas for over 30 years. It’s not new, but it’s never been pervasive either. The problem occurring now is directly related to porous borders and nothing else.

I cannot fly with my dog across state lines in this country, unless the dog has a certificate from the vet.

Hey, you should just be grateful to have a flying dog. You shouldn’t kvetch about needing to have a vet examine you!

I hate flying dogs. They almost never hit the fire hydrant from way up there.

Still, they at least try.

And don’t even get me started on flying Holsteins…