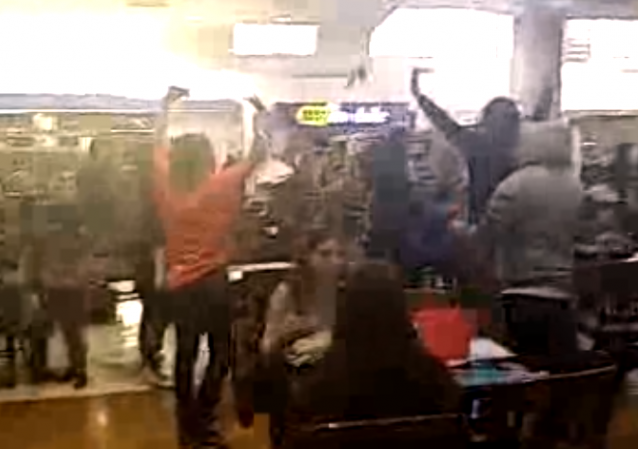 The video is by anti-Israel activist Bassem Masri, whose voice narrates as protesters take over parts of the South County Mall someplace, somewhere in America.

Biggest surprise of the evening?

UPDATES:  Sears has been breached, as protesters used the ancient Escalator Maneuver, first used by Hannibal to cross the Alps, flanking the Ladies’ Wear staff and leaving the Mens’ Footwear attendant fleeing into the Holiday Special Items section: 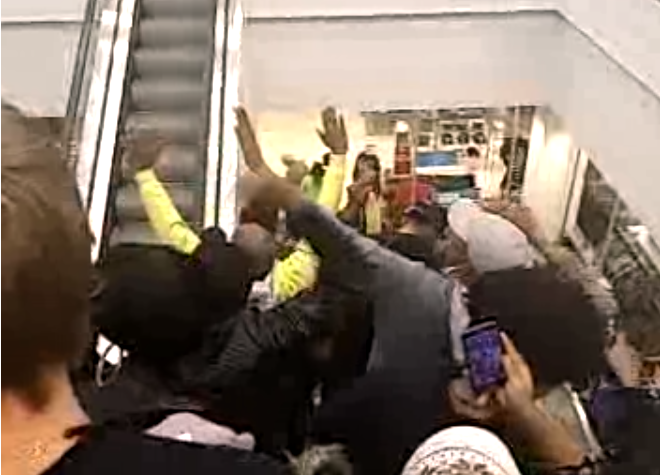 After intense rounds of hide-and-seek, the protesters withdrew and the gates to the castle were closed: 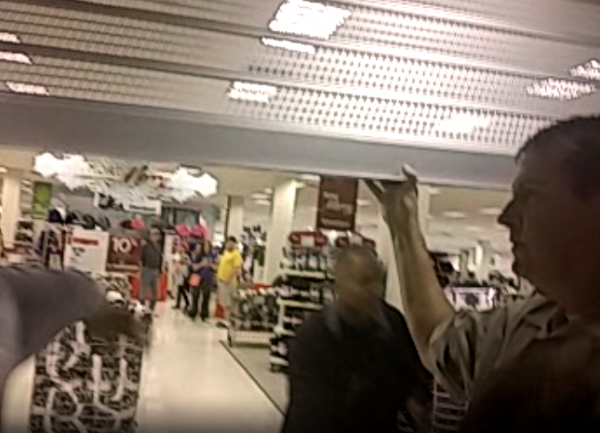 South County Mall Is in south St.Louis county Missouri
It’s about 20 minutes away from Ferguson.
It is a nice middle class area that has a few pockets of problems but nothing major.

Going to the mall and acting like a fool is going to make things better for everyone, because…..?

K-Mart was bankrupt, and somehow managed to buy property rich Sears. Sears bonds got hit for like 30%, iirc. The leveraged world of high finance players may be a bigger structural problem than the “hands up don’t shoot” histrionic activists/criminals.

These flash mobs that plot to disrupt private business need to be arrested and made to pay real damages.

If I remember my trespass law right…and I ain’t about to dig it up…a customer in a store is an invitee.

IF they are there for some other purpose besides commerce, they automatically become trespassers.

Everyone there may find themselves being sued, and barred from ever entering that store again.

Bassem Masri should be prosecuted for criminal ugly. Aggravated.

Who says facial recognition software is only for dark uses…???

Hamas operative Bassem needs to have his Visa pulled and be deported. Drop him somewhere in Cairo, see how long they let him get away with agitating for Hamas.

Wilson’s head on a stick?

These folks are terrorists. They should be labeled that from here on out.

Not quite. They’re criminals. They deserve an educational experience of what it feels like to be arrested for creating a public nuisance, having to raise bail, standing in front of a judge in a very quiet courtroom and trying to explain how what they were doing on video was ‘peaceful’ protest, and having to check in with their probation officer on a regular basis.

I’m all in favor of education.

Sorry, but the “protesters” have proven their violent tendencies, and their actions thereby carry the threat of violence. Although most of them are “useful idiots,” they have nonetheless joined themselves with terrorists. They should be treated as terrorists.

I’d be happy with their arrest, arraignment, and probation. However, if they were skinhead crackers carrying swastikas, you know what would have happened to them long ago.

These Mall trespassing criminals have not proven their violence. These are the dregs of society that want to feel relevant, that have a chance to act out against the man, maybe get on TV. It’s a party for them.

Under cover of these mobs of idiots, the anonymous types move in and do their destruction. And many devious leaders work in concert to orchestrate what they started, when they moved Sharpton/Crump in to manufacture another Trayvon.

Obama’s fundamental transformation largely targets capitalism, and its middle class. They get a few nuts out there and media makes them into “the voice of the people”. Many were paid by unions to march on Wal-Mart, yet Pelosi claims it’s the tea party that is astro-turfed. The tea party is still the two thirds that want less government control, lower taxes, sovereignty. But the MFM controls much of “the message”.

The tea party is the true grassroots movement, leftist elites countered with “occupiers” against capitalism. Schumer said “the word we are using is extreme”, of the tea party, and buzzwords now rule the day.

Maybe someone in the NSA will leak those phone conversations between Nixon and Jarrett, to see if they plotted another stand down order, to give the mobs the trophy of looting and burning Ferguson. Thankfully Democrat McCulloch did not sell his soul and award Nixon with his promised prosecution.

These Mall trespassing criminals have not proven their violence.

So, we wait for them to throw a Molotov Cocktail — the Nixon “free shot” approach? These disruptions are within spitting distance of 20+ businesses burned to the ground. Have they denounced the burnings? No? Then we should assume they are of the same group. They should not be allowed to congregate in malls, period.

You’re saying they should be shot as terrorists, for these antics? They can’t just arrest groups, that seem to be acting like other groups, of which some started fires.

Not shot, unless they go for the cops’ guns. The problem is policy. They’re coddling folks who could at any moment cause more harm. It’s long past time to have a curfew, and put these terrorists on notice that congregating in public places will not be tolerated. Their stated goal is to put fear into honky (terrorism), but the gov’t should be putting the fear of jail time into them.

“It” is whatever they currently don’t have but want.

I was standing next to a Male employee, a cashier, (I think his name is Bret) at this Sears when we heard the drums coming to us, the male employee went over to the gates as a (manager) was trying to close them. He asked protesters to watch out as so they dont get hurt by the Gate. When the protesters came into the store, a couple of males in the crowd ran by the poor Bret and screamed racial slurs. Called him a “Cracker” and a “Honkey” I felt so bad for the employee. I called the Sears to tell them what had happened to their employee and it was as if they didnt even care. This employee was so rattled by these comments that he looked genuinely upset. Call this Sears and tell them what happened, maybe they will care what happens eventually…

This is embarrassing. Why am I not seeing PD removing these people from creating a disturbance? Public Tantrums allowed to go unchecked. This does not impress me.

And they think people are going to join their side when they’re disruptive like this??? They are not thinking.

The object of the exercise is NOT to change the opinion of ordinary people: it is to radicalize the demonstrators.

St. Louis, yet another failed city, marching towards the fate of Detroit. Once American cities were marvels of opportunity and wealth creation. Long since buried under laws, regulations, taxes, codes, crime, and dependency many U.S. cities are slowly dying. Productive citizens flee, business close, if they are not burned down, and opportunity disappears and with the tax base. There are exceptions, Boston for example, but there are a long list of US cities on a continuum with Detroit. St. Louis being one example.

William Jacobson and Andrew Branca:
This is mob violence.
Why shouldn’t it be met with violent resistance by all the ordinary people in the mall?