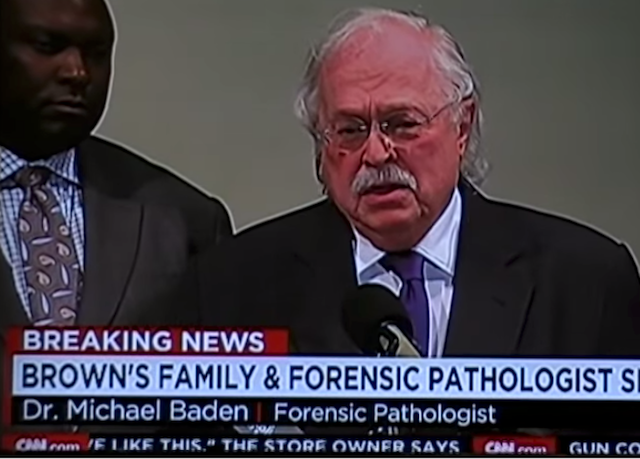 The New York Times reports today that the Ferguson Grand Jury sitting to determine whether to indict police officer Darren Wilson over the shooting death of Mike Brown heard testimony from Dr. Michael Baden, the pathologist hired by the Brown family to examine the body.

Dr. Baden gave a lengthy press interview immediately after conducting his “unofficial” autopsy a week or so after Brown was killed, as shown in the press meeting below.  I’ve set the video to skip the preliminary 12 minute-long introductory comments of Brown family attorney Benjamin Crump, but feel free to “rewind” if you’re into that sort of thing:

One of the more remarkable aspects of the events surrounding the shooting of Mike Brown by police officer Darren Wilson in Ferguson Missouri this past August is that Brown was subject to three-count ’em, THREE–autopsies.

A second autopsy was conducted by the Federal Department of Justice, of which little has been heard (leading your cynical correspondent to conclude that the findings were favorable to Wilson).

And a third autopsy was, rather unusually, conducted by a pathologist hired by the Brown family–or, more likely, by the lawyers representing the Brown family and hoping to make a bundle by suing the city of Ferguson.

The pathologist they hired, Dr. Michael Baden, is something of a character, and in Forrest Gump fashion has popped up in a number of high-profile murder cases. His credentials are, however, of a very high order.

So it was something of a surprise to see him perform an “autopsy” on Mike Brown that could best be described as—well, I probably can’t use that word here at Legal Insurrection.  Let us say it was remarkably limited, and arriving at incorrect conclusions.

Dr. Baden was also (apparently) unable to examine the inner tissues of the body with anything like the thoroughness expected of a modern criminal autopsy.  Both Dr. Baden and the official autopsy, for example, noted a gunshot wound to Mike Brown’s hand.  Importantly, there was no gunpowder stippling (caused by unburnt gunpowder) on the skin around this wound.

In this case, option (2) is clearly of the table as Brown’s hands were not covered by clothing.  (In any case, Dr. Baden was not permitted to examine any of Brown’s clothing, a tremendous and fundamental defect in his examination.)  Consequently, if (3) can be excluded it suggests the gun shot was fired from some distance.  All the other gunshot wounds to Brown also lacked stippling, and all narratives agreed that the bulk of the shots were fired at a distance unlikely to result in stippling.

If, however, it was true that none of the shots were fired at Brown at close range, the evidence would fail to support Officer Wilson’s narrative of a close-quarters struggle over the pistol when it fired.

In fact, the official autopsy found unburned gunpowder inside Brown’s hand gun shot wound, indicating conclusively that it was a contact gun shot wound.  This evidence adds overwhelming weight to Officer Wilson’s narrative of the fight over the gun.

Dr. Baden had missed it completely, most likely because he did not have access to the tools necessary to detect the gunpowder inside the wound.  Yet why would he have not insisted on these necessary tools, or at least made clear that their absence severely curtailed the confidence of his conclusions?

As further evidence of the less than fully comprehensive autopsy conducted by Dr. Baden, the Brown family lawyers conceded in the linked New York times post that a gun shot wound to Brown’s chest has been reclassified from an exit wound to an entry wound.  As with the gun shot wound to the hand, this finding has considerable consequences for the competing narratives in this case.  An exit wound in the chest would imply that Brown was fleeing from Officer Wilson when he was shot with that round, which was one of several early narratives promulgated by those wishing to make the Brown shooting appear an act of malice.

Now that the wound has been reclassified as an entry wound we know that it, as with all the other gun shot wounds received by Brown, was suffered as Brown was facing Wilson, consistent with Wilson’s narrative that he fired when Brown was rushing at him.

The New York Times post speculates that the timing of Dr. Baden’s testimony suggests that the Grand Jury might be wrapping up their consideration of the Brown shooting.  I’m not sure how they connect those dots, but I agree a Grand Jury conclusion is likely in the near future–temperatures in Ferguson have finally dropped to a level that makes street protests and violence rather uncomfortably cold.  Indeed, next Monday and Tuesday the lows are forecast to be in the teens.

Like with Trayvon, the MSM and other race baiters are trying to turn Brown into Emmitt Till. Disgraceful and disrespectful.

he was bought and paid for. so he stretched it as far as he could w/o fully ruining his rep.
I’d say his rep is tarnished now.

What rep ? You mean his rep as an attention whore whose ‘opinions’ are for sale to the highest bidder ?

It’s amazing to me how many people still insist that Brown was shot in the back while fleeing. I don’t know if it’s lack of coverage, or just willful ignorance, but that false narrative it’s around to stay despite being physically impossible.

There are still people who refuse to understand that Trayvon Martin doubled-back to assault GZ, when GZ had already given up trying to find TM.

While I’ve mention the Z-M shooting, I’d like to make another observation. Some people insist that it was TM yelling for help. It may have been. Imagine TM attacks GZ, knocking him to the ground. He begins to beat GZ, and GZ draws his gun. At his point, TM may have started to shout for help, realizing that he had bitten off more than he could chew. So just because TM may have been crying for help, this does not mean that GZ was not getting the short end of the stick, and it does not mean that TM was not the aggressor who got exactly what he deserved.

From STLtoday: “…Brown’s body had been washed after the first autopsy, a standard procedure, and skin from his thumb had been removed for microscopic analysis.”

Most likely the other autopsy followed the same procedure. Any gunpowder residue left on the body at this point would be much more difficult to detect, provided the pathologist-working-for-the-family-hoping-to-sue actually attempted to find any. (Yes, I’m skeptical)

They take a biopsy-sized sample of skin from are of gunshot wound in that process. They don’t flay the entire site.

Did that bozo ever actually say anything? He was just rambling when I gave up listening.

After the new autopsy report was released about gunshot residue on Brown’s hand, Baden was interviewed on Foxnews, and said the residue was “evidence of a wound being inflicted while his (Brown’s) hand was in the car at least because he does have a gunshot graze wound in the hand, the right hand.”

So unless he subsequently changed his mind, I’m guessing Baden testified to the grand jury something to the effect that although there is no 100% surety on how gunshot residue showed up on Brown’s hand, the evidence seem to support the officers story.

One of the things that struck me above all else in the “Brown family” appearance before the UN last week was the call for “all racial discrimination” to end in the U.S.

I could not possibly agree more.

While not quite the oldest profession, it’s hardly something new …

There is another class of coloured people who make a business of keeping the troubles, the wrongs, and the hardships of the Negro race before the public. Having learned that they are able to make a living out of their troubles, they have grown into the settled habit of advertising their wrongs — partly because they want sympathy and partly because it pays. Some of these people do not want the Negro to lose his grievances, because they do not want to lose their jobs. — Booker T. Washington, “My Larger Education, Being Chapters from My Experience“ (1911), Ch. V: The Intellectuals and the Boston Mob (pg. 118 )

No indictment. Hearing Baden was a ‘fairness’ accomodation to Brown’s parents, who’d hired him. Now the GJ declines. Announcement Monday or Tuesday in the chilly morning?

–temperatures in Ferguson have finally dropped to a level that makes street protests and violence rather uncomfortably cold. Indeed, next Monday and Tuesday the lows are forecast to be in the teens.

… bring out the fire hoses

amatuerwrangler in reply to Insufficiently Sensitive. | November 15, 2014 at 8:40 pm

I am pleased to see that Andrew has come to my position of using the weather to diffuse street protests. Regardless of money injected, the sticktoitiveness of the run-of-the-mill protester will wilt in sub-freezing weather.

Use the fire hoses the night before to “enhance footing” maybe.

I see on the news tonight (Saturday) that gun sales in the area have increased. Smith & Wesson and Remington should be listed as “buy” on the financial networks.

Baden may have once been a respected pathologist, but he has sold his soul and is just another clown on the grievance circuit.

Baden is 80 and must need the money. Hope he is sharp enough still to make sure Crump paid up front AND the check cleared before he got on a plane.

He didn’t really say anything at all definitively, did he?

If Holder called in the top FBI forensics team and couldn’t find anything, what is Baden going to be able to find without the clothes and without a fully equipped ME morgue?

The Brown Family autopsy was performed by Shawn Parcells. This tiny fact has been brushed under the rug. Baden flew into town 2 days after it was done. Just another piece of the puzzle.

That’s what I understood as well. and Parcell’s is a bit of a shady character then Dr. Baden came in and reviewed Parcell’s findings. Parcell’s is not terribly qualified considering he is not a physician and only a tech.

I am so glad someone else has heard about this. Most media is keeping up the deception. I don’t believe Baden ever saw Mike Brown’s body. He reviewed the actual “autopsy” notes and then he and Parcells wrote the official report. Parcells is more than a shady character, much more. The family autopsy is a sham. Totally.

This case has been tried in the media! Baden was hired to play a role where he could tell the story of the dead man’s wounds. Turns out not to be so.

Given the cast of characters. An old police chief in Ferguson who never saw a camera in his face, before. Of course, Obama, and his henchmen trying (just as they did with Zimmerman), to create hatred between blacks and whites.

And, now, in reality, that hatred exists, too. Pretty much washed away all that went on in the 1960’s. And, also what you saw when whites willingly voted for obama back in 2008. It’s an amazing thing to watch opportunists destroy the very ladder they climbed up on.

The black community really wants to lynch officer Wilson. And, there’s nobody standing there explaining to blacks the costs of these actions.

There are people there but unfortunately they are the wrong people. You can’t expect much sensibility from the likes of Sharpton and Jackson.

Everything the officials in Ferguson should have learned could have been explained by any semi-competent kindergarden teacher. It is not all that hard to understand.

“…the evidence strongly suggests that the conditional probability of a riot increases monotonically with temperature.”

Conversely, the conditional probability of a riot would also decrease monotonically with temperature.