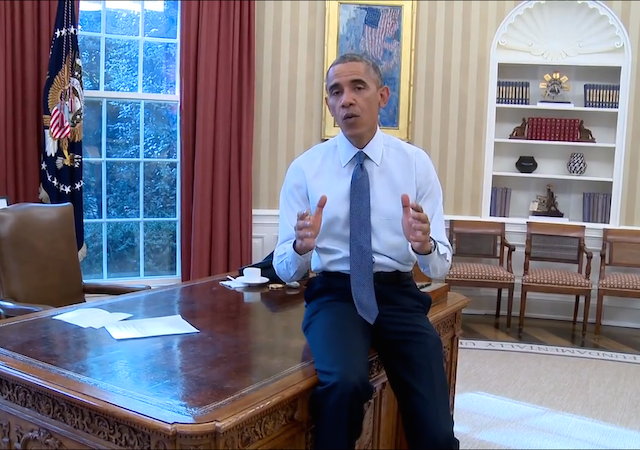 Last night, the President did more than bring illegal immigrants “out of the shadows” with his executive order. With the stroke of a pen, he made it harder for law enforcement officials to protect Americans from illegals who stick their heads out of the shadows to commit violent crimes.

As part of his executive order, President Obama suspended the Department of Homeland Security’s (DHS) Secure Communities program. Secure Communities required the FBI to automatically send the fingerprints of anyone arrested by state or local police to DHS for a cross check; DHS could then screen the arrestee to see if the person was either a criminal alien, or someone who fell under civil immigration enforcement priorities.

The program was responsible for identifying and deporting hundreds of thousands of dangerous criminals who are here illegally and already in custody is no more.

Amazingly, Democrats in Texas are celebrating the move:

“The existing misnamed ‘Secure Communities’ program is being terminated and replaced,” [U.S. Representative Lloyd] Doggett said in a statement to the American-Statesman. “With (the Department of Homeland Security) focusing on threats to national security and public safety, some immigration employees will likely be reassigned to higher priority duties. Future DHS requests to local law enforcement for release notification will likely focus on those who have committed a serious felony.”

U.S. Immigration and Customs Enforcement currently asks that local law enforcement agencies keep people in custody for an extra 48 hours after they have posted bail or otherwise been cleared for release if they’re suspected of being in the country illegally.

The program has drawn criticism from activists who argue it leads to the deportation of nonviolent undocumented immigrants, and the Austin City Council in June passed a resolution in opposition to Travis County’s participation in the program.

Having lived in Texas (and I will say I didn’t truly understand the immigration crisis until I saw it firsthand,) I don’t understand how Texas Democrats can possibly condone a policy that makes it more difficult for the police to control violence in border states. It’s indefensible.

This is beyond political correctness run amok. This isn’t “liberalism” in the way that a plastic bag ban or big soda ban is “liberalism.” This is something completely different, and it’s endangering the lives of both civilians and law enforcement officials.

I heard a black man talking to Mark Davis this morning about the president. He sounded royally ticked that jobs would leave the black community and go to the Hispanic community.

I don’t think this is going to play out the way Obama thinks it will.

JackRussellTerrierist in reply to legacyrepublican. | November 21, 2014 at 3:55 pm

Blacks just haven’t worked out as a quality labor pool in terms of productivity and reliability. Obola had to pay back his big business donors somehow, so he gave them a cheap labor pool last night.

Obola could only care less about black Americans if he didn’t hate white Americans so much. He just wants tyrannical power for himself and a fascist state for everyone else.

Blacks are going to vote 90+% Democrat no matter how much Barack screws them over. Race trumps everything for black voters. Barack has nothing to fear from them.

Amy, you said, “I don’t understand how Texas Democrats can possibly condone a policy that makes it more difficult for the police to control violence in border states.”

Democrats put Obama in office. You’ve noticed, I’m sure, much of what he’s done to this country. If Democrats didn’t agree with his agenda, then it wouldn’t be unfolding before our eyes.

Perhaps the mistake people keep making is holding onto the unsupported assumption that Democrats in general and Obama in particular want to see this country succeed and prosper.

“This is something completely different, and it’s endangering the lives of both civilians and law enforcement officials.”

From the Anonymous Conservative:

“Leftists are identical. They cannot map out the long-term consequences of their actions. The amygdala hardware is just not there. So they seek the pleasure of the moment, avoid any hardships – even those which might yield benefit later if endured now. Eventually they collapse the very governing structures they need to hide behind, to shield themselves from reality.“

The reality they may need to shield themselves from may be a lot more ‘real’ than they have ever dreamed of in their philosophy.

When the rule of law and the Constitution are so boldly trashed by them, they should not look so amazed when that lawlessness turns around and bites them in the ass.

What’s really funny about this – Zuckerberg of Facebook was a big supporter thinking he’d get all the visas he’d want to import programmers or whatever.
But his lordship only wants illegals who will never learn anything more than how to recognize the D when voting.
So Zuckerberg in his zeal to help this along gets Grubered.

Last night the USA became a nation of Man not of Law. Tyranny will follow unless Obama’s executive dictate is overturned. Obama is not the state and he is does not rule the USA. And, I am not subject to his whims and royal decrees.

This could be the very first ‘shot’ of the second American civil war. With Boehner and McConnell hogging the leadership positions of the GOP at this point in history, it will be a miracle if our nation remains 57 – er, 50 – states. Truly a miracle.

In the alternative, perhaps we can elect a brave leader like Ted Cruz, who will use executive orders to reverse every illegal order Obama ‘issued.’

To be fair, some communities will remain secure.

Those will be the multi-million dollar, gated communities, patrolled by private security forces, and having homes in which people like the Obamas, Soroses, Clintons, Bidens, Pelosis, Reids, Krugmans, etc., live.

Zuckerburg and his wife won’t live in one of those communities though. They’ve recently purchased themselves a lovely private island in Hawaii, so they’ll be safe and far away from all the crime and garbage and social turmoil that their “open borders” policy will inflict on the rest of us peons.

Texas self-defense laws will mitigate a lot of this…. but not all of it.

Remember, BO (PBUH) announced that he was going to fundamentally transform these United States.

BO (PBUH) despises Israel. BO (PBUH) supports Islamist militants. His problem is that there is no core group of armed Palestinians in the Americas to help him deconstruct, by force of arms, OUR COUNTRY.

OK, barring importing armed Palestinians, how about importing a great horde of poor illiterates from the Americas. (Well, Canada is out (or up), but every other country in the Americas is in.)

BO (PBUH), as a “community organizer” knows that he can fundamentally transform OUR COUNTRY by importing vast numbers of poor illiterates that will overwhelm every single social support system in the Fed government and in the States as well.

BO (PBUH) is “kicking the ant hill” in order to fulfill his need to “fundamentally transform America”. BO (PBUH) is deliberately using free immigration to drag down the economy and create great confusion and consternation in our governments, schools, social services, policing, medical services, etc.

BO (PBUH) is, in fact, a despotic emperor, no matter what he says to the contrary.

Note: “PBUH”, since Obama is a closet Muslim, is “Peace be unto him”, a Muslim statement of respect.