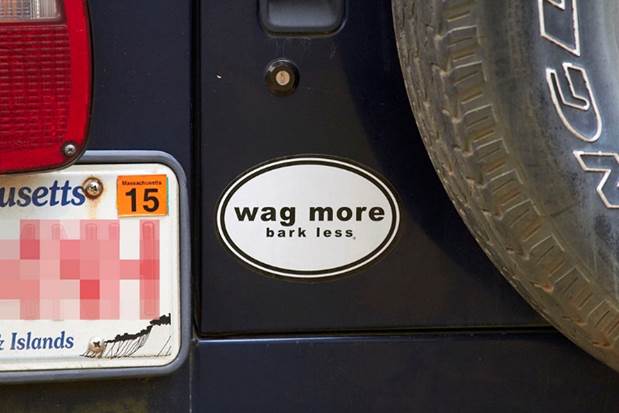 A reader sends this message and photo:

Last week I went up to Martha’s Vineyard to visit my 85 year old mother. She lives over on Chappaquidick Island – yes, Teddy’s playground.

The Vineyard is full of old hippies and rich New England liberals. We were only intending to spend 3 days on the island, but our car broke down. Getting it fixed on the island was a slow process requiring parts to be ordered from the mainland. We ended up being stranded for over a week.

The Martha Coakley and Jean Shaheen ads on TV were so relentless that even my Mom started to automatically hit the mute button when they came on. They make you physically ill after a while and I had no interest in searching for stupid bumper stickers. My Mom has a new one that lightened my heart.

Maybe I’ve been wrong all these years, but I always took that sticker to mean “If you disagree with my liberal philosophy then just shut up.”

Did you visit the memorial bridge on Chappaquiddick? Howie Carr used to do his broadcast from the bridge each anniversary. Read ‘Senatorial Privilege’ by Leo Damore if you want to know the truth behind the entire incident.

Yeah, when a Democrat candidate calls Gov. Haley a whore, he did it with a smile and tail wagging. When psycho Biden debated Ryan, he was wagging and had a Joker like grin as he attacked, telling America that Republicans want to put blacks back in chains.

The left is going for the LIV and the PC Cultists that have learned to hate anything that is not diverse, diverse FROM American values. Stirring up division is their path. Republicans do need to wag for traditional family, church, and apple pie, but show their teeth toward government abuse of power.

We can’t relent from pointing at the five star general terrorists that are back beheading innocents, after Obama illegally traded them for one deserter. Or from the 50,000 sick illegals that were covertly bussed around the country spreading the deadly strain of entero-virus. (that issue is current and local for soccer Moms) Or a dozen other scandals that “are on the ballot” marked with “D” for Obama’s Democrat stooges.

Someone needs to be barking, but we can also paint a brighter future dependent on kicking the current Democrat “domestic terrorists” out of office.

The Democrat GOTV is all about barking, and I’m not sure wagging alone has ever been an effective response. Maybe wagging as we skewer them. 🙂

screw barking, it is well past time for some snarling and biting