Millions spent on pandemic response equipment that has already expired. 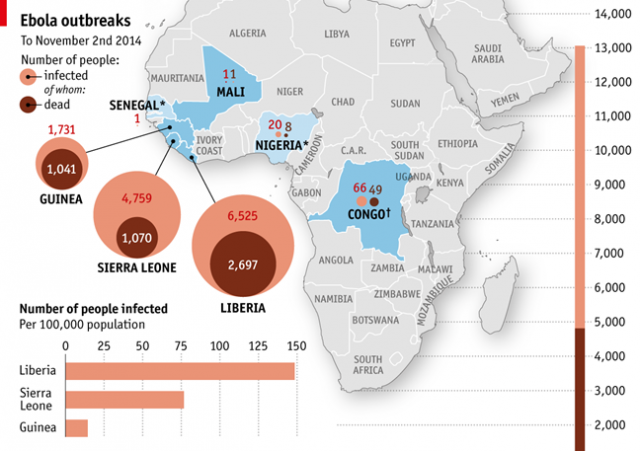 Concern about the administration’s handing of the global Ebola crisis was a contributing factor in the Republican success across the country in Tuesday’s election; polls indicated Americans were more worried about the lack of a comprehensive response than they were about immigration and same-sex marriage.

It is likely this concern will remain for quite some time, especially as Americans returning from Africa are still being impacted by this pathogen.

The Iowa Department of Public Health said Thursday that 13 travelers who were in West African countries are being monitored in Iowa for Ebola.

The travelers were in Sierra Leone, Liberia or Guinea in the last 21 days and are now in Iowa.

Twelve had low risk of having been exposed to Ebola in those countries health officials said, so they are being allowed to resume normal activities.

IDPH has ordered them to take their temperature twice a day and report their health status to public health.

One person had some risk of being exposed to Ebola, and has been quarantined. The person was told to stay at home and take their temperature twice daily, including at least once with a public health official observing.

Let’s hope the quarantined Iowan takes the situation more seriously than the Maine nurse who fought against restrictions based on public health concerns.

Meanwhile, one of the nurses who contracted the deadly virus while treating America’s patient zero, Thomas Duncan, is mystified as to how she became infected and resents being thrown under the bus after she boarded a flight to Ohio:

Amber Vinson says she followed all the rules when caring for an Ebola patient. So how did the Texas nurse contract the deadly virus?

“I have no idea,” she told CNN. “I go through it almost daily in my mind: what happened, what went wrong. Because I was covered completely every time. I followed the CDC protocol. … I never strayed. It is a mystery to me.”

Vinson said she felt like Frieden blamed her without any basis.

“I did what I was supposed to do, and now you’re saying I should not have flown,” she said. “You know, I checked multiple times before I even left Dallas to see if it was OK to go.”

As officials review the flawed response, questions are being raised about millions that have already been spent for epidemic prevention.

In 2006 alone, Congress gave the Department of Homeland Security an extra $47 million dollars for pandemic readiness. But a new audit by Inspector General John Roth found the agency didn’t know what equipment it had, where it was stored or if it even worked.

Nearly all of the Transportation Security Administration’s 200,000 respirators are expired.

“In fact, the department believes their entire stockpile of personal protective equipment will not be usable after 2015,” says Roth.

The current toll in Africa stands at over 13,000 cases and over 4,000 deaths. Additionally, because of the number of infections, health professionals are able to follow-up on recoveries…discovering a condition now referred to as “post-Ebola syndrome,” characterized by vision loss and long-term poor health.

It looks like the the Democrats are suffering from their own version of post-Ebola syndrome. Given the continuing crisis, response to infectious diseases may remain an important issue for the next election cycle.

I believe that Obama/Jarret has/have brought Ebola here purposefully to stoke crisis. Both are Marxists. Both hate America and Americans.

An EMT told me today that although the government has clamped down on new reports of the Ebola outbreak they are getting the news to “those who need to know”. I asked him if he knew how many were in the US with Ebola. He said “17 … all from West AFRICA, not US citizens”.

He said that ebola was no problem, the flu was far worse. Many more die from the flus each year. I asked if he knew what what happened in 1918. He said about a million died from the flu epidemic. I told him it was 7 million. I asked if he knew where the 1918 epidemic started. He said he didn’t know. That I thought was a wise answer. It did not start it Spain even though it was called the Spanish Flu. As I understand it started in Kansas.

Yet the government then clamped down on the reporting of the outbreak. That failure to let the public know, to fully inform more than just “those who need to know” clearly resulted in millions more of deaths from lack of public precaution and misinformed treatment.

Yet the EMT was adamant that the government had to clamp down on the news because the public would panic. And he said he he seen panic. I said that we are all human, no one is exempt from panicking, but that people who are in formed are not so likely to panic.

I asked him if he knew what “Burkina” was. He did not.

We are in for bad bad trouble I think. “Those who need to know” know not much.

I also vote for a post-posting edit function. How wandering from grammar and word intent are my fingers in typing.

Not to worry. You meaning was clear to me and your point well made.

There’s a website that tracks Ebola cases in the U.S. : http://shtfdashboard.com/

Obama pretends he is “helping Africa” by bringing Ebola here. He says we owe it to the health care workers or something. But in his quest to be president of the world, he failed to set up new centers for disease control around the world, as was recommended six years ago just for cases like this. Instead he wasted billions enriching his campaign donors in failed solar companies.

Enterovirus-D68 cases are also at high levels now. Whether that is related to the 100,000 illegals Obama covertly escorted around the country has yet to be proven, but it is a risk (to Americans) Obama is willing to take to accomplish his open borders mission.

Obama slow walks the legal immigrant that must be tested for disease and endure an arduous process. But he invites the illegal alien third world, and uses executive authority to bypass the protections Americans deserve. That includes bypassed screening for a variety of “third world diseases” that are now reemerging in the US.

Ebola will probably not break out in America, but it is the flashing red warning light, telling us the leftists in command will risk our health and security, for their goal of changing the demographics of America.

Flooding our hospitals and transportation systems with illegals untested for contagions, is a risk to our system Obama is willing to take. And higher risk means many die, whether we can trace the direct cause or not.

Which is simply irrational. No way around that, although they try to use a brigade of straw-men to buttress their crazy.

I despise the “Flu is worse” argument more than anything.

Yes, more people will die of flu every year but the real issue is that millions upon millions of people will get the flu but a very tiny percentage will die. However, with Ebola some say 50% will die and if you happen to get it in Africa where treatment is less advanced that percentage may go as high as 90%.

I’m thinking I would rather get the flu than Ebola!

So thousands dead from flu is not worse than one dead from Ebola?

The three word “Flu is worse” argument? Worse in what way? Of course if you have Ebola it’s worse, but the flu strain that can kill or give polio like symptoms is worse for the country as a whole (so far).

You don’t get to choose Ebola or the Flu, they choose you. And the flu is “worse” in that it spreads more readily, and keeps its hosts alive longer, spreading to others that say “it’s just the flu”. The Flu has the superior GOTV (virus) effort. While Flu is killing thousands a year, Ebola still hogs the headlines for killing one.