Ebola news: the death of Dr. Martin Salia, and a request from Kaci Hickox

Ebola news: the death of Dr. Martin Salia, and a request from Kaci Hickox 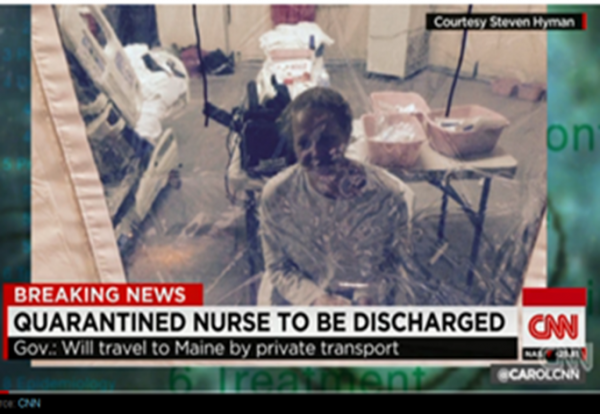 When I heard that Dr. Martin Salia, a Sierra Leone native who is married to a US citizen and who contacted ebola while treating patients in his native country, had been flown here for treatment and was in “very critical” condition, I thought “if we can cure him, then American medicine is really onto something in the treatment of ebola.”

Sadly, it was not to be: Dr. Salia has died of the disease. He was very very far gone when he arrived:

“He was placed on dialysis, a ventilator and multiple medications to support his organ systems in an effort to help his body fight the disease. He also received a dose of convalescent plasma and ZMapp therapy was initiated on Saturday,” the hospital said in a statement.

“We used every possible treatment available to give Dr. Salia every possible opportunity for survival,” Smith said. “As we have learned, early treatment with these patients is essential. In Dr. Salia’s case, his disease was already extremely advanced by the time he came here for treatment.”

There are two very salient facts about the case of Dr. Salia. The first is that he never knew how he got the disease; he was a general surgeon in Sierra Leone and was not specifically treating ebola patients. This reflects the fact that ebola is not always easy to spot, even for medical personnel who are well-versed in its diagnosis and are treating patients in areas where it is endemic, and therefore would be on high alert for it. That is one of the many many dangers of the disease, and you may recall that the same thing happened with Dr. Rick Sacra, who was treated here much earlier in the disease’s course than Salia and has survived.

The second thing I’d like to highlight is that it took four (or five; I’ve read differing accounts) full days after Dr. Salia first showed ebola symptoms for his blood test to become positive for the disease. By that time he was extremely sick indeed. The loss of those days of possible treatment here may have made a big difference. Here is the story:

When Martin Salia’s Ebola test came back negative, his friends and colleagues threw their arms around him. They shook his hand. They patted him on the back. They removed their protective gear and cried.

But when his symptoms remained nearly a week later, Salia took another test, on Nov. 10. This one came back positive, sending the Sierra Leonean doctor with ties to Maryland on a desperate, belated quest for treatment and forcing the colleagues who had embraced him into quarantine.

The doctors who tended to him in Freetown appeared to be unaware that an early Ebola test — taken within the first three days of the illness — is often inconclusive. In a country where information about the disease continues to move slowly, it was another potentially tragic mistake.

In many cases, a negative test at that stage means nothing because “there aren’t enough copies of the virus in the blood for the test to pick up,” said Ermias Belay, the head of the CDC’s Ebola response team in Sierra Leone.

As Dr.Salia worsened, he assumed he had malaria, as many with ebola in Africa do (think again of Thomas Duncan, who thought the woman he helped had either malaria or pregnancy complications, and relied on that—and he was just a layman). Dr. Salia prescribed malaria medication for himself, but it didn’t help:

He [then] called his colleague Alhali Osman Smith, who worked with him at Freetown’s Kissy United Methodist Hospital.

“He told me he thought he still might have Ebola,” Smith said, “in spite of what the test said.”

Which brings us to the latest from the arrogant Kaci Hickox, who asks us to stop calling her “the ebola nurse”:

I never had Ebola, so please stop calling me “the Ebola Nurse” – now!

I, for one, never called Hickox the ebola nurse. In fact, I went so far as to call her “America’s sweetheart,” but do I get any thanks? No!

It is surprising that, although Hickox is a public health nurse, she doesn’t seem to understand the very concept of quarantine. Nor does she seem to understand that (a) she initially appeared to have a major symptom of early ebola, a fever; (b) she had just returned from treating ebola patients; and (c) her negative blood test that night was meaningless, as the story of Dr. Salia demonstrates all too graphically.

shes a selfish bitch who refused to accept that the tests had a lag time that was very important.

She kept spouting on about “the science” without having a clue what the actual “science” showed. Waving her negative test around as if it were conclusive proof just reinforces my decision to refer to her in the future as Nurse Dumbass.

Hickox was or is,employed by the CDC intelligence office. I ohether she was over there as a nurse or as a collector of facts for the CDC.

Many people, including medical professionals like nurses (who are not trained in medical science but rather in patient care) do not understand that there are two basic kinds of medical tests.

Most screening tests, whether the screening test given in your child’s doctor’s office for strep throat or this ebola test, are very accurate if the test comes back positive but a negative test actually means nothing other than that the test did not pick up presence of the disease being tested for. A negative test result does NOT mean that you don’t have the disease, it simply means that the test did not detect it.

From the Lancet… 46% of those in close contact with Ebola patients turn positive for antibodies to Ebola. From other studies, 13% of Ebola patients do not have a fever when the disease is communicable. A self imposed 21 day quarantine is so little to ask Miss Anti-Nightingdale. Where is that “community” spirit the Progs ask of all? In Hillary Clinton’s mind it may take a village to teach a child, but in the real world it takes only one Ebola positive idiot to kill the village. Frankly, I am far more worried with the other diseases that Obama let into the country to win over illegals to vote Democrat after amnesty. More US citizens have died from those than Ebola.

She should STFU, because people are already calling her all kinds of things that are less printable than “ebola nurse.” I am not referring to the relatively calm people here, but the liberal techies over at Reddit.

If someone would design a shirt that really offends Kaci, I’ll buy a few.

If Salia rode a bus in Sierra Leone, and people sat next to him … nothing to worry! So says our Nobel award winning messiah.

This crazy nurse was given the opportunity to be the hero or the villain and unfortunately for “her” and no one else but her she choose villain. She could have chosen to adhere to the quarantine and been a national hero for her cause but nooooooo…she choose an action because of a political affiliation that made herself the biggest fool you could imagine. Not only did she put at risk the general public but destroyed her career and future credibility!

I say she got exactly what she asked for, she just wasn’t smart enough to know what she was asking for.

Per the account above, which states he only had two tests at both endpoints of this interval, we can only state it took 1-4 or 5 days, we don’t know exactly when he had enough viri in his blood for the test to detect it. It’s also possible the test has some false negatives.

“…although Hickox is a public health nurse, she doesn’t seem to understand the very concept of quarantine.”

Not quite. She does not understand the concept of quarantine *applies to her* In common terms, this is Denial, and it is a killer in dealing with contagious diseases. Much like the mindset of other liberals, bad things can only happen to other people who do not care as much as she does. Our little modern-day Typhoid Mary wannabe can not wrap her mind around her being responsible for any bad in the world, therefore everybody who wants her to sit at home and catch up on her reading is an evil hater.

Go home, Mary. Take a few online classes to brush up on your medical skills while waiting.