The wages of Democratic arrogance. 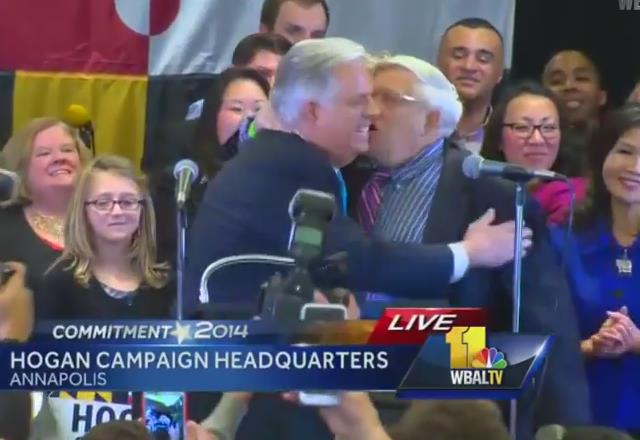 But we have a Republican Governor for just the third time in 48 years. (Spiro Agnew was elected in 1966 and served until 1969, when he went to White House as Richard Nixon’s vice president. Bob Ehrlich was elected in 2002, but was defeated for re-election four years later by Martin O’Malley.)

Republican Larry Hogan beat Lt. Gov. Anthony Brown in a race that Real Clear Politics called a tossup and Five Thirty Eight determined he had a 6% chance of winning by surprising 9% margin. (A late poll commissioned by Hogan – and ignored by Five Thirty Eight – had him up by 5.)

Though I’m very happy with his victory, Hogan will be greatly limited as both houses of Maryland’s legislature have veto proof majorities.

The past eight years Martin O’Malley has used Maryland as the launching pad for his presidential aspirations, with tax increases and leftist legislation.

Consequently Maryland has developed a reputation as having a bad business climate due to taxes and regulations. Brown claimed that he’d be better for business but nothing in his record suggested this would be true. Brown’s major initiative was universal pre-K for four-year olds.

It’s hard to see how that addresses economic uncertainty. Hogan argued that we needed change from the ever increasing taxes. In an election where the economy and jobs were the primary concern of voters, Brown did little to address that anxiety and Hogan did.

It didn’t help that Brown failed at the highest profile job he was given as Lieutenant Governor. Despite his failure, he had the support of nearly the entire Democratic establishment of Maryland. This support showed the absolute arrogance of the state’s Democratic party. Did they really think that people wouldn’t notice? (On television one Democratic politician lamented that Brown didn’t do a good job of defining himself. That’s ridiculous. His performance as Lieutenant Governor defined him.)

Regardless of what Hogan accomplishes over the next four (or, hopefully, eight) years, his victory shows that the Democrats in Maryland are only concerned about power, not about governing effectively. (Another sign of that arrogance. Brown’s concession speech was delayed. Apparently concession speeches are only given after the candidate has called the victor to wish him congratulations. Brown gave his phone number to Hogan but didn’t bother to get Hogan’s at the time. He had to get it tonight before his speech. Brown didn’t expect to lose.)

About 5 minutes in to his victory speech (see below) Hogan introduces his father and recalls that earlier his father had given up his congressional seat to run for governor and that forty years later Larry Hogan finally is governor of Maryland.

Unfortunately Dan Bongino has lost his lead and while the race has not been called as of this writing, he trails by nearly 2000 votes.

Well, I said that if Brown won then I would have to move out of Maryland. Dodged a bullet…for now. Great victory for Hogan and a BIG “up yours” to O’Malley.

Nobody with any sense could consider voting for Brown who spearheaded the total failure Obamacare Maryland website. TOTAL failure which no matter how hard he tried could not spin it to his favor.

Hogan, however, is going to have a very tough job in Annapolis. The legislature is filled with clowns from the Baltimore and Montgomery County Mafia. They are seriously entrenched. Best of luck to Hogan and I hope he is able to break their lock on power.

Sure. Two years ago many of those people sat on their hands and let Obama beat Romney. This year they’d had enough and went to the polls to vote for the establishment as a vote against the Democrats.

Expect more pressure from conservatives in primaries in two years. The movement seems to have matured and produced, this time, a lot of impressive candidates.

The intra-party wars are not over. They have just begun.

Frosh was re-elected Maryland’s Attorney General, which is unfortunate.
Hopefully Hogan can work some moderating influence on Frosh, but I doubt it.

Democrats outnumber Republicans by 2:1 in Maryland, so for Hogan to win means that a HUGE number of Democrats were disenchanted with the O’Malley/Brown leadership. Probably close to half. It’s really a stunning defeat for Brown.

This election, overall, amounts to a “restraining order” on the Democrats and on Obama. The people have spoken, and spoken very clearly.

The question as to whether or not the spineless ‘pubs can steel themselves to the media onslaught and the ‘rat dirty tricks remains.

With McConnell and Boehner (especially Boehner) at the helm, restoring common sense, paving the way for businesses and jobs, and fiscal responsibility are all still unsettled.

I think I saw a report earlier in which Rush was quoted as saying (paraphrasing) the ‘pubs weren’t elected to work things out with the ‘rats. They were elected to fight them and undo the damage the ‘rats have done.

Greetings from deep indigo Monkey–oops, Montgomery–County, Maryland. I was surprised and pleased to turn on the radio on my way to work this morning and learn that Hogan had won.
While I voted for him, I was surprised at the news. Maybe there’s hope for this state yet!

Kepha H According to reports last night, Hogan got 36% in Montgomery County. I think that’s much higher than Ehrlich ever got.

And the Donks do NOT have a veto proof majority in the House of Delegates. They are unable to overturn a Hogan veto on a party line vote. In the Senate they do-but only just and Jim Brochin, self styled “maverick” Democrat, is the deciding vote. He’s claimed to be a “conservative” Dem for a long time, now he might just be forced to put his vote where his mouth is.

Thanks for the info. I didn’t check the exact numbers. In any case, I’m still in a faintly pleased shock over Hogan’s win and a few GOP gains in my deep indigo state. Best wishes, David Gerstman and Weirddave.