US-China deal brokered, but will it make a difference? 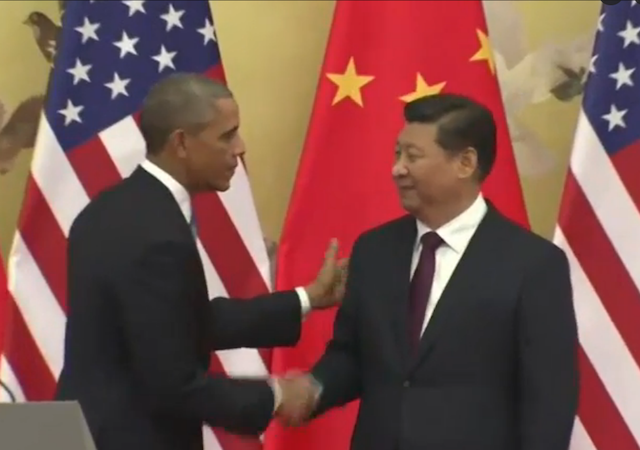 This week, the United States and China shocked the world with a joint announcement pledging to address greenhouse gas emissions. The plan has been touted as “historic” by Administration leaders, but critics say that the end game of this plan is less about controlling climate change, and more about creating a favorable political environment.

Xi, whose country’s emissions are still growing as it builds new coal plants, didn’t commit to cut emissions by a specific amount. Rather, he set a target for China’s emissions to peak by 2030, or earlier if possible. He also pledged to increase the share of energy that China will derive from sources other than fossil fuels.

Together, the U.S. and China create more than one-third of all greenhouse gas emissions worldwide.

Anyone who has paid attention to China’s economic model over the past decade (and beyond,) or the political climate in the U.S. going into the lame duck session, knows that a plan that has the potential to impact economic growth is beyond unrealistic. Republican leadership in the Senate is not impressed:

McConnell cited the deal as evidence that the president has no plans to move toward the middle to work with the new Congress, which will be under total Republican control for the first time during his presidency.

“I was particularly distressed by the deal that he has apparently reached with the Chinese on his current trip, which as I read the agreement requires the Chinese to do nothing at all for 16 years, while these carbon emissions regulations are creating havoc in my state and other states around the country,” McConnell said in response to a question from CBS News Congressional Correspondent Nancy Cordes. “I would welcome the president moving toward the middle. I have said before I hope we can do some business on trade and maybe tax reform. First indications have not been very helpful.”

Heads of state blow smoke all the time, but this goes beyond a token statement on addressing greenhouse gas emissions. Now that the U.S. and China have taken this step, we’re going to see pressure on other countries to comply with these industry-killing agreements. International groups are ramping up pressure on #3 emitter India to fall in line with the ambitious(ly unrealistic) goals set by China and the U.S.:

The U.S.-China deal “frees up India to say what it believes is an equitable stance … now that China is saying what it plans to do,” said Alden Meyer, director of international policy at the Union of Concerned Scientists.

While Modi’s pledge to boost renewable energy is welcomed by activists, New Delhi has stressed it will mine more thermal coal to get power flowing to the third of its 1.2 billion people still without electricity.

With next month’s United Nations climate talks just around the corner, you can expect this issue to remain at the forefront as a welcome distraction for progressives still reeling from the midterms.

At this point, China doesn’t even meet the standards of the US Clean Air Act of 1963.

China is in it’s infancy, in terms of dealing with “clean air.” They have along way to go before they even get beyond the obviously offensive particulates and aerosols. Dealing with invisible and olfactory-challenged gases, such as CO2, is a long way off.

Most Chinese see the “Climate Change” meme as a Western plot to keep them backward.

Like ObamaDoggle, the Gorebal Climate Whatever thingy is a hoax.

In both cases, the real intent is to gain power on a mammoth scale over the lives of people it would be impossible to dominate otherwise.

And Pres. ScamWOW wears a “I’m weak, DO ME!” sign wherever he goes in the world. So he gets done, but we are the real screwees. We will be paying more for our electricity…when we can get it…for our motor fuels and everything else connected to energy. Which is pretty much everything. While we work all that out, our priestly druids will fly above us in their warm, lighted jets on their way to their next congratulatory convocation.

How does Obama figure he’s going to get 2/3 of the Senate to consent to this treaty? Or does he just plan to implement it anyway?

I’ll assume that was a rhetorical question at this point.

All the emission scenarios show China will peak around 2030. So guess what — China agreed to a non-binding agreement to peak their emissions around 2030 — which is happening anyway. There is nothing here.

Salve for the base, poitical distraction, and legacy polishing. Meaningless.

Oh Jesus, “The Community Organizer” is getting anally raped on the world stage again. The Chinese must be laughing their asses off in the Politburo.

“To secure ourselves against defeat lies in our own hands, but the opportunity of defeating the enemy is provided by the enemy himself.” Sun Tzu, The Art of War, Ch. IV.

Obama is going to cripple our economy and the Chinese will slough this “commitment” off in a few years.

If this guy wasn’t doing so much possibly irreparable damage to our country he would be funny to watch. Instead it makes me want to cry. What a truly delusional fool.

Paul said that Obama was a “delusional fool.” Well, no, Obama is implementing his “plan” to radically transform this country. Everything he has done has been to further his plan’s goal.

We must get back on track ourselves and decry Obama’s actions for what they are in fact: the acts of a socialist taking down the USA’s status anyway he can.

I say “delusional fool” because anybody who subscribes to Marxism is delusional. History has shown that it doesn’t work, therefore anyone who is a proponent of it is a fool.

That being said, I do agree with you that Barry is doing exactly what he said he would do… “fundamentally transform” this country. Too bad nobody in the media saw fit to ask him what exactly he meant by “fundamental transformation.”

“Now that China is saying what it plans to do …” is a pretty funny line, but in standup it’s conventionally followed by something like, “But seriously, folks …”

Sounds like a tie. Nary a hint of “hope” or “change” there.

The Chinese have conned president Obola into believing they will go along with his con. Well, except the chinese know it is a con game and president Obola knows they are conning him as well. What a great set of leaders we have.

China promises ABSOLUTELY NOTHING until 2030, when the current leadership in both countries will be long gone. And only they will ‘peak’ by then, so nothing could even be said to them about the ‘agreement’ for a couple years beyond that.

In the meantime, China is on schedule to open a new coal-fired power plant without restrictions every week for the next ten years at least.

India will be building at least half that many, and more are needed in both.

Nations worry about their environments in almost direct proportion to their per capita wealth (communist countries tend to under-perform, but it is still proportional).

If we want a cleaner world, let people create the wealth first. Then they can afford to worry about it.

There are many millions of people, hundreds of millions, in both India and China without any access to electricity.

Think about that for a minute.

And Obama expects them to sacrifice growth and all its benefits for their people to care more about snail darters and sea levels a century from now.