Why the Clydesdales will be sharing the spotlight with zombies 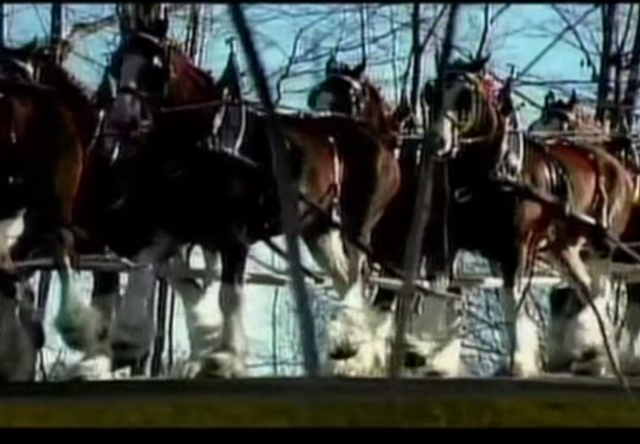 When I was eight years old, my family took a road trip to St. Louis to visit friends and see the sights. Among our touristy stops was a visit to Grant’s Farm where we saw the Budweiser Clydesdales. I remember being in awe of the huge beasts with hairy hooves. I still have a little stuffed Clydesdale that sits on a shelf at my parent’s house.

The Clydesdale commercials are one of the few, if not the only long-running ad I always looked forward to.

Sadly, the Clydesdales will no longer be the sole hallmark of Anheuser Busch. Evidently, 44% of 21-27 year old drinkers have never tried the red label Budweiser. According to The Wall Street Journal, it’s not just the younger drinkers who’ve caused a decline in Budweiser sales. Light beer, craft beer, cider, and other malt beverages are the biggest culprits.

After years of developing advertising and marketing that appeals to all ages, AB InBev plans to concentrate future Budweiser promotions exclusively on that age bracket [21-27]. That means it won’t trot out the traditional Budweiser Clydesdales for this year’s holiday advertising. It means February’s Super Bowl ads will feature something more current than last year’s Fleetwood Mac. It means less baseball and more raves with DJ group Cash Cash.

The marketing push is accompanied by an effort to get Budweiser back on tap. Theory being: If Levi’s and Converse can end years of sales declines by winning over young consumers, so can Bud. “This is a very considered, long-term view of what will turn around the brand,” said Brian Perkins, AB InBev’s vice president of marketing, Budweiser.

Another long standing, watery American beer, Pabst Blue Ribbon, managed to reinvent itself as the hipster beer of choice. An achievement which probably bodes well for Budweiser. PBR’s resurgence was largely due to an approach similar to the one Budweiser is planning.  A study released in May indicates “autonomy” is what the younger crowd is looking for in products they deem cool. That’s exactly where PBR honed in. The Huffington Post reported:

Then something changed, and PBR was suddenly the hipster’s choice at bars and barbecues everywhere. Sales jumped by 20.3 percent in 2009 and continued to rise steadily over the next few years, according to Beer Marketer’s Insights. By 2013, Americans drank more than 90 million gallons of PBR, according to data from Euromonitor, which is nearly 200 percent more than they did in 2004.

In the early 2000s, PBR’s popularity started rising without any encouragement from the brand itself, which benefited from a more general renaissance of all things “retro-chic.” Seizing the opportunity, the brand began marketing to the demographic that was already attracted to the beer’s blue-collar associations and low price point.

“[Pabst] linked themselves to a variety of things that presented the ‘autonomous’ image,” Campbell told The Huffington Post. “For example, they sponsored bike messenger rodeos, and they did it in Portland, which is a very autonomous city.”

Budweiser indicated they’ll take advantage of marketing at events like food festivals, which is probably a good place to start. While horses and autonomy seem like a match made in heaven, perhaps the marketing gurus know best. Although zombies and mainstream music seem to be exactly the opposite of what worked for PBR.

Following the Wall Street Journal’s report, The Washington Post assured readers the Clydesdales are not gone for good:

Anheuser-Busch announced that, while it would still go with zombies and Z in some of its ads, the Clydesdales would continue to occupy their role as the official heart-melters of the Super Bowl.

“The story this morning [WSJ report] may have left a wrong impression – the Budweiser Clydesdales will, in fact, be featured in next year’s Super Bowl advertising and are also a part of upcoming holiday responsible drinking advertising,” Anheuser-Busch said in a statement.

Marketing changes or not, the little stuffed Clydesdale on my shelf is there to stay.

“Another long standing, watery American beer, Pabst Blue Ribbon, managed to reinvent itself as the hipster beer of choice.”

More proof positive that the millennials are just crazy.

Is the Bud mgt. using the same add firm that proposed the New Coca a cola

Ah yes, nothing gives a business more legitimacy than partnering with Jay-Z, a man who honed his business skills selling crack to junkies in the ‘hood. Classy.

The lips that touch liquor shall NEVER touch mine. Get thee behind, John Barleycorn!

I’m pretty sure there’s going to be a hipster revival of the WCTU not far down the road now.

A new WCTU with hipsters? I’d pay to see that movie, lol.

Ho-ly Cow. Can’t they at least have a Clydesdale tackle Betty White and then give her a Bud.

“You’re not yourself without a Bud” (and with a Bud?).

Makes sense to me….. every time I see a horse walking away from me, I think of Obama.

Trivia Time: PBR got it’s name by winning the blue ribbon at the 1892 Columbian Exposition in Chicago.

Anheuser-Busch says the horses haven’t been put out to pasture for the Superbowl.

The story this morning may have left a wrong impression – the Budweiser Clydesdales will, in fact, be featured in next year’s Super Bowl advertising and are also a part of upcoming holiday responsible drinking advertising.

The Clydesdales play a strong role for the brand, representing Budweiser quality and care for more than 80 years. As icons of the brand—and relevant symbols of integrity, perfection and team spirit for all generations—they are important to the brand and our campaigns.

Maybe instead of going after the gangstas they ought to try winning their old customers back. They’re good about showing their respect for the country as a whole. How about a little respect for the people who supported them all these years?

“Then something changed, and PBR was suddenly the hipster’s choice at bars and barbecues everywhere.”

Ace of Spades has just put up a post entitled “Feds Paid $5 Million For Monthly Government-Sponsored Hipster Raves, Featuring Lots of Anti-Conservative Political Agitprop.” According to his post, “the National Institutes of Health is spending this $5 million on Pabst Blue Ribbon for hipsters instead of ebola.” The idea is that hipsters will quit smoking by attending “commune” dance parties in bars across California.
http://ace.mu.nu/archives/353384.php

Pabst Blue Ribbon’s sales increase is not the point of Ace’s post, but I see a dot that can connect with Kemberlee’s post here. Massive spending for a program of government indoctrination must surely explain why “something changed, and PBR was suddenly the hipster’s choice at bars and barbecues everywhere.” PBR’s new marketing campaign owes much of its success to taxpayer funding for an anti-smoking campaign and subversive anti-conservative propaganda.

Now I wonder just why Pabst Blue Ribbon was chosen for this lucrative deal. Campaign donations, maybe. Will Budweiser be able to duplicate this success without government funding? Or has the NIH opened up the cookie barrel to other brewers?

PBR once spent decades as the beer of toothless rednecks, so that may be the hipster attraction, the counterintuitive and ironic choice, sort of like pajama boys with lumberjack beards.

So basically, now their commercial will be as shitty as their beer.

A little German in the genes, Rags?

The Scots and Irish have a long and distinguished history of creating and consuming ANYTHING that could make one “moderately insensible”.

Read “Tam O’Shanter” for a good sampling of all the names the Scots had just for brewed beverages.

The PBR phenomenon began after it won a couple of blind taste tests of American-style pilsners. There was some publicity over it, since it was a very old brand with a bargain price.

I remember PBR as being very basic beer. Cheap keg that no one complained about as long as you didn’t tell them what it was. Used to prefer the old original Schlitz, never a Bud fan.

A boy sat under the Anheuser Busch,
The rain, ’twas coming down in Schlitz,
He rose a sad Budweiser boy,
Pabst yes, Pabst no, Pabst yes.

A “haunting quatrain Jimmy Durante used to croon in the old Parody Club back in 1928”, source: Vinegar Puss, SJ Perelman.