Searching for common ground after an uncommon shellacking. 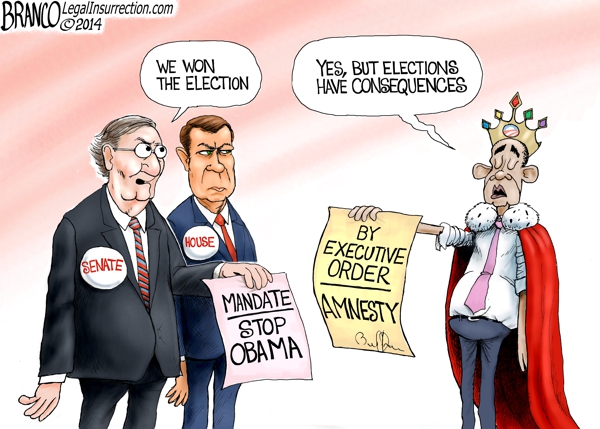 Boehner and McConnell are both bought and paid for by the Chamber of Commerce, an organization that loves the cheap labor provided by illegals. Hopefully, the new Congress will replace these two puppets with _real_ leaders.

All an executive order can do is keep illegal aliens from being deported during the remainder of Obama’s term — and those illegals were not going to be deported during Obama’s tenure anyway, because Obama has been blatantly ignoring our immigration laws (despite the hysterical, and ludicrously false, claims of the amnesty industry) for years now.

Some of the illegal aliens “amnestied” by Obama’s EO may get work permits, but again, those are only good for as long as Obama remains in office. So even if Obama does his worst, it can be undone in two years — if we elect a president who actually takes his/her oath of office seriously.

However according to news reports, the Executive order would be broader in scope than merely stopping deportations. Obama has already slowed deportations to a trickle already.

“Obama’s impending executive action is the exact opposite. He is planning on giving work permits, Social Security numbers, and drivers licenses to as many as 8 million illegal immigrants. This is not narrow humanitarian relief. This is a flagrant attempt to get around Congress’s exclusive Article I power “to establish a uniform rule of naturalization.””

The problem lies in rescinding the ancillary benefits he bestows on the illegal population.

0bama has the statutory authority to give any immigrant legal status. Every president has used this power, in individual cases. But if he can do it for one person he can do it for 12 million, and there’s nothing Congress can do to stop him.

I strongly disagree. If you know of some authority for your claim, please cite to it.

My understanding is that POTUS can allow individuals to stay here while being processed but ONLY within the limits of the statutes. He cannot ignore the statutes’ requirements in order to create a class of people and then grant them benefits of a different class. I am also of the view that arriving here illegally bars aliens from being granted work visas or social security numbers. I could be wrong but it’s unlikely.

Ask yourself a question – if this was so easily within reach of POTUS to do this, why the wait? Six years and now all of a sudden it’s a crisis?

Come on, let’s be real here. He can’t do it; any employers who hire these illegals will not be able to escape any liability under existing state laws; and so forth.

Milhouse, I’m beginning to agree with your position. The facts seem to be that the Legislature (in years past) gave the President wide latitude and explicitly granted the President broad powers when it came to immigration (arguably, powers it should have retained).

It appears the INTENT was to allow necessary flexibility in the law so that certain individualized circumstances could be handled without requiring Legislative Branch action. That worked well as long as we had rational, reasonable, mature Presidents.

Now that we don’t, well…it doesn’t work anymore but that doesn’t mean Teh Won is overreaching. The only thing he is abusing is the trust placed in the President to use the conferred power judiciously.

Fortunately, what can be done by EO can be undone by EO. We just have to elect a President with the balls (literally or figuratively) to do so…and that will NEVER be a democRat.