What are your top 5 conservative principles? 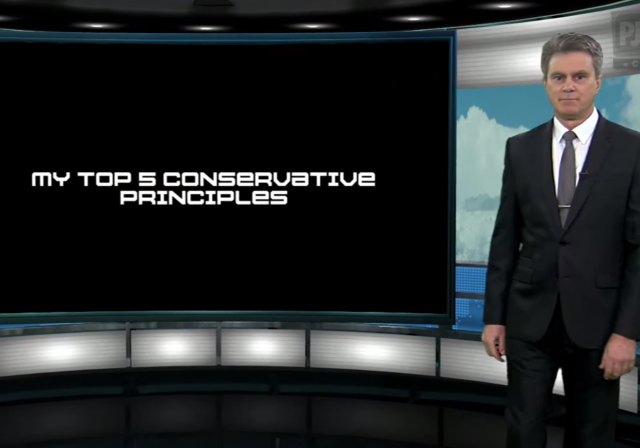 Whittle articulates the nexus of culture, politics, and American values succinctly on a regular basis. Seeing as Republicans just took control of the Senate, it’s a good time to reflect on what we believe, why we believe it, and then proceed in a manner befitting that foundation.

As Whittle says, “Conservatism kicks ass. You really should give it a try.”

Do you agree with his 5 principles? Are there any that you’d change or add?

What are your top 5 conservative principles?

Whittle really does these well. He needs our support.

Does Whittle fancy himself a budding television host or something?

In any event, it makes little sense to watch an 11+ minute video to get information which could be read in a tiny fraction of the time, so I have no idea what his list looks like.

America’s Founding principles may be loved by modern conservatives, but they were hardly ‘conservative’ at the time. There is one central principle of Conservatism, which is lately referred to as ‘Chesterton’s Fence.’

That is what ‘conservatism’ amounts to.

The principles which underlie a free society are few and simple:

1. No one may be deprived of life, liberty, or property without the due process of law.

2. The rule of law over the rule of man, laws may not be contravened or superseded by fiat or diktat.

3. The right to private property and to enter private contracts, enforceable by an independent and impartial judiciary.

4. The rights of personal freedom of speech, thought, action, and privacy as enumerated in the Bill of Rights.

You sound a bit out of sorts today. Hope you feel more congenial tomorrow.

1. watch the FLUCKING video before you bitch about it, and

2. get your bowels moving.

PLUS, you can have “due process” from a Soviet court. Or an American court using law derived from years of Collectivist jurisprudence. Not much comfort there. And NOT Conservative, either.

Chesterson’s Fence certainly has some application, but Conservatives are a LOT more positive than that. We are, in fact, much more defined by “let’s do this” than by “don’t do that”.

You are SO confused…

Nothing funnier than a RINO telling conservatives what they believe.

Chesterton’s Fence is pure sophism, and you can see it in the construction:

2. Chesterton’s conservative, who wants to tear down a fence, is made by Chesterton to be wholly ignorant of why the fence is there in the first place, ergo, he must be stopped from his blind lumbering about.

Stop right there – it is a logical fallacy (strawman) to declare that conservatives are categorically ignorant of extant realities. However, it sure makes arguing against them easier, doesn’t it? It’s bullshit, though. Pure strawman.

Take your anti-conservative RINO sophisms and place them where photosynthesis is rendered impossible.

OK, I love you, brother, but you’ve got this kinda bak-ards.

In the metaphor, the conservative is the guy who asks if the PROGRESSIVE wrecker who plans on tearing down the wall knows why the wall is there.

It has application in the question of marriage, among other things. The PROGRESSIVE says, “That old, bigoted tradition of ‘marriage’ must be torn down!

“There’s no reason why men cannot marry men, and women marry women! NOBODY has a right to tell me who I can love!”

Except there are excellent reasons why “marriage” has the meaning it has had though history and across cultures. It is the WRECKER’s job to learn WHY before wrecking, and to deal with the REASONS the wall or fence was erected by humans who COULD EASILY be smarter than the wrecker. Before the wrecker goes about wrecking, he/she must learn to love the fence/wall sufficiently to UNDERSTAND the wall/fence.

We could apply it to the idea of honoring cultures as better than others, as well.

It’s sort of irrelevant who is held ignorant by definition, progressives or conservatives. It is the construction of Chesterton’s Fence that damns it, not the particulars. Chesterton himself does not add details or topics, he holds the ‘extremist’ reformer (whether conservative or progressive) to be ignorant by definition, while the wise centrist (Chesterton, of course) knows all. That is not a description of reality, hence my strawman tag on it.

Forgot a phrase that’s important: “Chesterton himself does not add details or topics, he holds the ‘extremist’ reformer (whether conservative or progressive) to be ignorant by definition *no matter what it is he seeks to reform*, while the wise centrist (Chesterton, of course) knows all.

Oh, and I love you too, snookums.

You’re taking the metaphor where it never goes.

The questioner never claims to KNOW why the wall is there. That would be an entirely different proposition. He/she is not a know-it-all, just someone who starts from the sound position that SOMEBODY erected a wall/fence there, and MAYBE they had a very sound reason for it. The wrecker proposes to tear it down, but the questioner simply asks the wrecker to investigate the reason that the wall/fence is there first, before bringing it down.

It could be the fence to the raptor enclosure…

Then it is hardly some wise saying. It’s basically ‘look before you leap’.

But let’s get back to love….

That is what ‘conservatism’ amounts to.

What, having some idea of what the hell you’re doing before you charge ahead and do it?

Hard to find fault with that, except in genuine emergency situations.

(For you barbarians, that’s “Above all, no excessive enthusiasm.”)

One of our local GOP clubs here in the Puget Sound had BW as a speaker. Everybody was all excited to attend and lots of non-club members showed up.

Nobody remembered to bring a flag and the public meeting room didn’t have one. The only people who had a flag were my wife and me, both well-known tea partiers. She ran out to the car to get it; it’s just one of those 6X9 inch flags so we have something to wave if we get short notice of a rally or something similar.

It was wonderful to hear the GOP club leader invite her up to the stage to hold the flag while 100 people stood and recited the pledge. Of course she was identified as a tea partier because she was wearing her Tea Party Patriots t-shirt. Bill thanked her for having the flag.

Bill Whittle for Press Secretary in the 2016 Cruz/Walker administration!

In a Cruz/Walker team, Cruz and Walker both know what needs to be done. Cruz can spearhead the effort to inform the public and gain support, while Walker can get it done behind the scenes, the ‘sausage making’. Walker could redefine what a VP’s role can be.