Being pro-Israel on campus – fight or flight? (spoiler alert: Fight)

Being pro-Israel on campus – fight or flight? (spoiler alert: Fight) 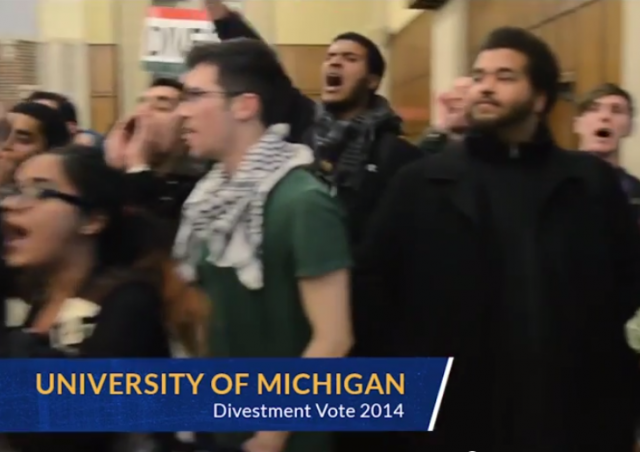 We have covered the thinly veiled and sometimes not veiled threatening and violent behavior of anti-Israeli activists on campus so many times, it’s hardly possible to sum them up in one post anymore. Just scroll through our BDS Tag.

If you read our recent posts about Cornell, you’d know that it can happen anywhere, even on campuses that are not as a whole anti-Israel.

Non-student agitators and faculty often are the catalyst for what now euphemistically is called “direct action,” the new rallying cry for groups like Students for Justice in Palestine.

This video sums up some of what is happening (via Caroline Glick):

From what I’ve seen, pro-Israel students are choosing to fight back, not to flee.

That’s a good thing, and needs to be encouraged.

But that doesn’t make it any easier to be that student who has to deal with the harassment and threats face-to-face.

So do a good thing.

Support your local pro-Israel student and pro-Israel campus group. However you can. Go to their events. Donate your time or money to help.

Help them fight, because flight is not an option.

Ask Daniel…he’ll know how to handle these BDS losers…

Or Sampson and his jaw-bone of an ass. Seems kinda poetic.

But enough about Debbie Wassername-Schultz…

Seriously, Prof., these kids need some Kevlar. These BDS crazies will cut you.

Where are the Jewish males? Not the Obama metrosexual eunichs but the young bucks who are aware that there is a reason they were given bonus upper body strength. Or do you prefer listening to women going on YouTube and pleading that they are terrified on campus?

The phenomena described here are part of a war. Those of us opposed to islamic jihad need to treat it as such.

Where are the open minded liberals within the democrat party? When will Liberal American Jews wake up to this nonsense that is going on in our liberal campuses that are run by pompous Presidents, Provosts and Deans who are members of the democrat party?

I do not want to hear about the “Never Forget” mantra when this hatred is allowed to perpetuate and permeate our liberal institutions and the democrat party.