As usual, Black Friday was a total mess

As usual, Black Friday was a total mess

Hold my earrings, guys. It’s about to get REAL. 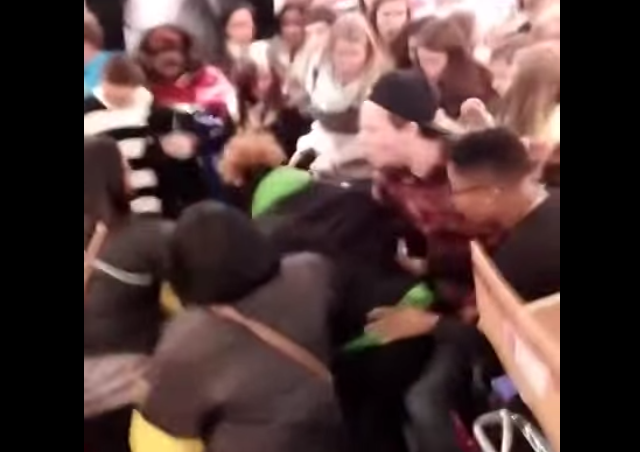 Another Black Friday is (almost) behind us, and while I’m 90% certain that no one has been trampled to death this year (yet,) things got a little crazy (read: completely insane) at retail outlets across the country.

Authorities said two women got into a pushing and shoving match — with at least one of them reportedly throwing a punch — over a Barbie doll on Thanksgiving evening.

Sheriff’s Deputies has to be called to the Walmart store in the 11700 block of Imperial Highway after reports of the fight broke out.

Witnesses said the two women began fighting over a Barbie doll just before 7 p.m.
Deputies were able to diffuse the situation and said no one was arrested.
Officials also said no one was injured in the altercation.

No one was injured, but reports are unclear as to whether or not their dignity was able to be salvaged from the rubble.

The insanity spread to the UK, where customers went wild over…TVs, or Tickle Me Elmos, or whatever it is that people are risking life and limb to spend money on these days.

As for myself, I stayed on the couch with a blanket and watched a Star Trek marathon; the only brawl I wanted to see involved a Romulan and an infuriatingly optimistic Cardassian battling over territory in the Neutral Zone.

The real question is, why do we do this to ourselves? A cursory inspection of the internet this morning revealed to me that many of the deals available in the early shopping hours of Black Friday are also available online. You may not be able to get 70% off of a TV, but 45% off sounds like just as good of a deal to me.

Am I missing something? Is it really worth it to risk life, limb, and dignity to get your hands on a cheap TV? Is there some sort of perverse satisfaction in spending boatloads of money at Walmart if you get marginally more bang for your buck? Are we all really just looking for an excuse to punch someone in the face?

Or is it simply as Gateway Pundit put it? A girl’s gotta have her discount panties!

Cleanup at the front!

Once again, the media features this stuff just to demonstrate how uncivilized the public is (and therefore how much we need our “betters” to dictate our behavior. Yawn…

Gee, my wife and I went shopping at Sam’s, Home Depot (2 stores), Sears, Game Stop, Best Buy and Wal-Mart and had lunch at Chick-Fil-A.

Big crowds, no fights, no shoving, no shouting, but some pleasant conversations with other shoppers and a lot of good humor. Got some good deals on luggage, an X-Box, clothes and some other stuff. Not my favorite way to spend a day, but well worth it.

I like how some people (nudge, nudge, wink, wink) make sure to tell us that they are above all that. As a recent retiree whose new genealogy research business isn’t doing much business, we have to make our dollars stretch. And Black Friday is a good way to do that. Check out the flyers for stuff you need, check the web to make sure the prices really are a good deal, put together a list and a plan of attack and go for it.

For us, some things are better left on the shelf on Black Friday. We wait for our daughter’s 25% Wal-Mart discount for working on Thanksgiving and Black Friday. She can buy as much as she wants (and not just for herself) for 25% off. For her and us that is a lot better than the triple time pay some legislator is advocating for those working on holidays. I’m doing a Wal-Mart plug here. We have two kids that work there. Not the greatest place, but not bad either.

You don’t get it – these people we read about LIKE brawling. It’s almost like they feel deprived if they get something just by paying for it; they need to fight for it and vanquish the wannabees before heading for the registers.

The majority of people can go shopping and act like civilized adults. For the others, the barbarians who would get into a fight over a damn Barbie Doll, they don’t know how to behave like civilized people anywhere at any time.

Since I don’t want to encounter them, and since I don’t believe that there is any “deal” or “sale” item worth interactions with idiots, I stay home on Black Friday. But then I’ve never seen shopping as a contact sport.

On a happier note, no deaths this year!