Desperate times for The Times. 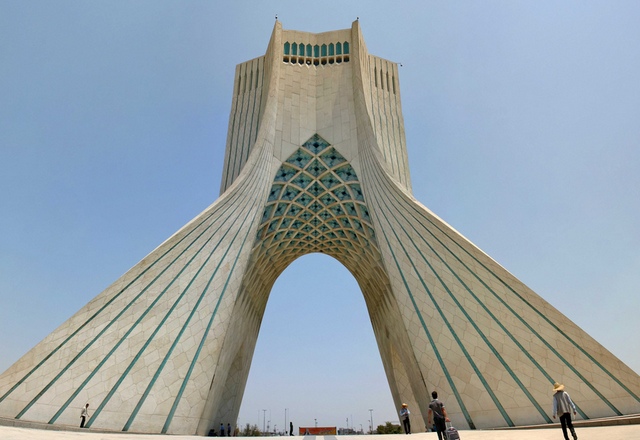 Few publications were more enthusiastic about last year’s election of “moderate” Hassan Rouhani as president of Iran than The New York Times. Perhaps some of that enthusiasm stemmed from the possibility of engaging in commercial enterprises with the regime in Tehran.

Ira Stoll editor of SmarterTimes noted the other day that The New York Times is promoting a tour of Iran accompanied by one of its journalists, Elaine Sciolino. After noting some of the peculiarities of the deal, Stoll writes:

There’s no mention at all in the Times promotional language about the tour of Iran’s status as a state supporter of terrorism, of its pursuit of nuclear weapons, or of its human rights abuses. For information about those abuses, anyone considering plunking down nearly $7,000 for the pleasure of accompanying a Times journalist on a “relaxing evening and dinner” after antique shopping in Iran may want to consider, first, browsing the State Department’s latest human rights report on Iran. It reports that under Iranian law, “a woman who appears in public without an appropriate headscarf (hijab) may be sentenced to lashings and fined.” It also says that “The law criminalizes consensual same-sex sexual activity, which may be punishable by death or flogging.”

One can understand why the Times is seeking new revenue opportunities as a tour operator, since its revenues in traditional areas such as newspaper subscriptions and advertising are not growing fast enough to satisfy investors. But there is potential for this sort of thing to adversely affect the Times’ journalism. How fair will Times journalism be toward those calling for tougher Iran sanctions if the sanctions would force the newspaper to cancel its lucrative luxury tours of Iran? Why are Times journalists lending their reputations, such as they are, to promotional material that describes Iran as a kind of paradise — “colorful bazaars,” “trendy joie de vivre” — while skipping over the reality of other parts of Iran, like, say, Evin Prison?

The Algemeiner followed up on the story to find out who might be welcome on the this top flight tourist adventure. Specifically, the Algemeiner’s reporter tried to find out how tourists booking with the Times might deal with some potentially awkward situations.

When asked it it would be alright to notify people during the trip of one’s Jewish or gay identity, Kevin replied, “I don’t know if you’d want to tell that to everyone you met; if that would be the best idea.

“I know relations between Iran and Israel are very strained,” he continued; “it might not be the best to talk about that with strangers that you might meet. That might be something to hold back and ask your experts on the trip.” …

Asked if he found the possibility of facilitating discrimination to be objectionable the NYT rep parried that, “Well, we would, of course, not want anyone to feel prejudiced on the trip; we’d do our best for that not to happen. But, of course, anywhere we travel we can’t guarantee every factor.”

There’s an irony that a publication that has called the military’s “don’t ask, don’t tell” policy “noxious” is now advocating such a policy for Jews and gays in order to make a few bucks with Iran. Apparently The New York Times has no problem with doing business with a terrorist state that discriminates against both Jews and gays.

They are being edgy, like Code Pink. What’s next? Ebola tourism?

I was at a party years ago when a young Iranian living in the USA told about how his college ads sister had been arrested for protesting against the mullahs preventing women from wearing makeup and requiring head covering. They received a letter from her that said “They told me that I was going to be killed in the morning.” Evil people rule Iran.

As often suspected, it is not just Leftism that informs the NYT’s coverage. They feel akin to any ideology that hates America and capitalism.

The ironic part is that at least 200 members of the Sulzberger-Ochs families that control the NYT company derive ALL of their income from its – capitalist – dividends to the preferred class of stock they hold. It’s so “preferred” that they get paid dividends even when the company loses money.

I wish I could be surprised by this load the NYT is selling, but I’m not.

The professional Left is no longer informed by any consistent sense of right or wrong. It has made itself into a movement that stands for nothing but Marxist/Socialist beliefs, and a cynical opposition to anything that can’t be controlled, bullied or coerced into siding with them.

We should’ve seen it coming when that woman in the Obama Admin.– can’t think of her name right this second– started talking about “speaking truth to power.” I mean this was when the Dems controlled Congress and Obama was riding high right after his 2008 election. Geez.

Right now all things Israel is on the Left’s crap list, thus all things anti-Israel (and an awful lot of things anti-Semitic) is in the Left’s good graces. Including, it seems, Islamic terrorism, state-sponsors of terrorism, and tyrannical states that flog, stone or otherwise put to death homosexuals and other “deviants”.

The professional Left has moved beyond parody. It’s gotten that bad.