What we have here, is a failure of confidence and trust

What we have here, is a failure of confidence and trust

Frank Luntz: Crisis of confidence in government and media 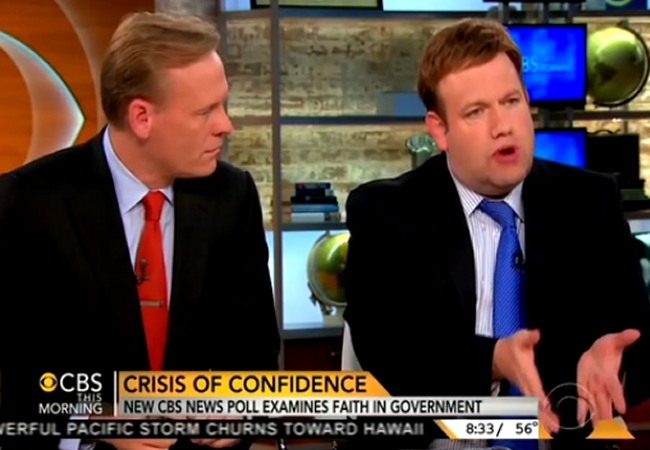 Pollster Frank Luntz appeared on CBS News Friday to comment on a poll which found trust in government institutions is extremely low. He went on to point out widespread distrust in media as well.

Kyle Drennen of News Busters has the story:

Frank Luntz on CBS: ‘Collapse in Confidence’ of Government, Media

Appearing on Friday’s CBS This Morning, Republican pollster Frank Luntz reacted to the latest CBS News poll showing Americans having a “crisis of confidence” in government institutions: “The problem is that the institutions that have the greatest impact on us, the CDC, the FDA, the EPA, those that are responsible for our health and safety, are the ones that have had the biggest collapse. In fact, in some cases it’s 20-30-point drop in just the last 15-18 months.”

Luntz also made an observation about the public’s trust in government at another time in history:

What’s interesting is that the highest level of trust and confidence in government came during the Reagan administration, which was the most anti-government, and the lowest level of trust is right now. And one could argue that this president has been trying to preach trust or at least involvement of government to help people. So there’s another message there. The less the government does, the better able government is to do it well.

Luntz makes a lot of sense here. One could argue that the best way to make the media do its job is to vote Republican.

So, the American people have learned…or are learning (some are REALLY SLOW)…that you can’t trust lying liars who lie.

All the flucking time.

I suppose one has to take that as a good sign. Sorta…

In some of these recent polls, media has dropped below used car salesmen in trustworthiness.

To get any lower, they would have to slither on their belly like a serpent. So, I bet on David Gregory.

A poll was conducted at my house and the media was rated lower down than whale shit.

Snail slim…under a rock…at the bottom of an old well…in a coal mine.

People keep calling this a crisis of confidence. It is not. It is a crisis in competence.

People are still following the government’s instructions and guidelines. They’re still calling in when they are asked to self monitor, and they are still, largely, abiding by quarantine. The few that have broken it did so because they weren’t thinking, not because of any lack of trust in the government.

We just question whether it knows what it is doing, and whether its guidelines go as far as they need to. It the government was right, that sort of questioning would not matter; we’d go a few months, find things panned out the way the government said it would, and go on our merry way.

The problem is that time and time and time again, it has not. Nurses following the CDC guidelines given are still falling ill with the disease. Sick people are being cleared to travel. The CDC completely misses vectors until it is far to late.

They are repeatedly failing in their basic mission. No amount of unearned confidence can fix that.

I think it is certainly BOTH. When you have the people who are supposed to be the “brights” telling you stuff they have to contradict a day or two later, and you have ScamWOW telling you outright, obvious lies, that DOES destroy confidence.

But I am only confident at this point that Barracula WILL lie to me, since he’s done virtually NOTHING BUT LIE since BEFORE he was President. I’m ALSO confident that his people have NOTHING like their advertised missions as a priority.

When you look at the documentary evidence of obama’s life it appears(What can actually be seen), to be all lies. He has lied so frequently and often that it is amazing that there is anyone left who believes anything he says.

The people self-monitoring and calling in – do you have any faith that that information is going anywhere? or is used by anyone?

Or do you think (as I do) that it will just sit on shelf somewhere collecting dust until some grad student comes around 20 years hence doing research for a Masters thesis?

I spend my summers in a small town (2,000) along the Washington state coast. I was thinking the other day how small local government is so much more efficient than large remote governments.

Example…. we have a bear problem in this town. Several bears have learned that garbage cans have food. One morning I went out and looked down the street and a bear had knocked over a neighbors garbage can and spread garbage all over his yard and the street and the neighbors yards.

At just about that time a city truck with two city workers was driving up the street on the way to some project. When they saw the garbage they stopped their truck and got out and cleaned up the whole mess. They just did it. It wasn’t their job. It wasn’t city property. They just did it because it was the right thing to do.

In this small town things like this happen all the time. The Chief of Police was born and raised there. The town manager is on a first name basis with most everyone. When you have a problem you can walk into city hall and get something done.

Per the Pew Research link the highest levels of trust in government was during the Eisenhower/JFK/Johnson era, peaking with Johnson at around 79%.

And Clinton’s highest trust level was higher then Reagan’s best. And Clinton also was rated higher overall then both Bush1 and Bush2, who was really in the toilet much of the time, in the low 20s.

Lutz is right that you certainly can’t trust media reporters who disseminate faulty information, like him.

Did it occur to you that PEEEEE=ew is NOT the sole source?

So what was his source? The pull it out of his a-hole pole?

And be real, the assertion that small government has anything to do with public trust level is facetious on its face. Johnson, big BIG government, had the highest rating by far.

Sorry, dude. I was alive and sentient during L. B. Credibility GAP Johnson’s tenure.

Where do you get this crap?

If you wonder where Luntz got his data, maybe the best idea is directing a query to the author of this piece.

Too bad that sentience period was over so fast.

What’s fundamental is that Luntz’s statement that
the highest level of trust in government came during the Reagan administration is a fabrication. Or maybe he just got Reagan mixed up with Clinton, who had better average ratings overall for his presidency then any of the other Republican presidents since Eisenhower, Reagan included. And even with the Monica fiasco, Clinton’s lowest low wasn’t as low as Reagan’s lowest low, or either of the Bush presidents, and certainly not as low as Crooked Dick…

Now be a good fella and check all this out on Gallup’s Presidential Approval site. You need to be more critical of the information you seem willing to swallow so uncritically, from the right as well as the left, so you can avoid that garbage in and garbage out effect that seems to plaque your thinking.

jayjerome66 – You appear to be conflating approval in a president with trust in government. Not the same thing at all and not remotely comparable.

You’re right and you’re wrong: yes trust in government and president approval rates are two different things, but they’re conflated in the same way a hula-dancers hips are conflated with her grass skirt.

They both appear to rise and fall together on the source charts assembled from data collected since Eisenhower by Pew and Gallup.

In any case there’s no evidence trust in government or presidential approval rates have anything to do with government size, a facetious connection at best, which was the point I was making about Luntz’s statements.

conflating approval in a president with trust in government. Not the same thing at all and not remotely comparable.

Ah yes, Cloward–Piven will do it all, just give it a bit more time to set things completely left.

America is not the nation it was at the time Reagan was elected.

Remember the shock of realizing there are enough stupid and deluded people to elect – and reelect — President Ebola? It’s only going to get worse, as Ebola Boy acts unconstitutionally and gives amnesty to millions of illegal aliens who can be counted on to vote themselves all kinds of freebies.

Great idea. Let’s break it up.

BTW, how are those boundaries going to work? And in how many parts will it be divided? And who gets to keep the gold at Fort Knox? And what are the new names of the counties going to be: America A and America B, etc? And do the parts get to sing the Star Spangled Banner, or are some going to have to come up with a new anthem? And will each need their own passports? And does that mean each part will have their own Supreme Court? And what’s going to happen at the Ryder Cup? And the Olympics? And will the NFL become the Local Football League? And who will the Miss USA Beauty Pageant winner represent? And the song lyrics ‘This land is your land, This land is my land” will have new significance. And and and…

And oh yeah, last time that was tried didn’t it result in the bloodiest war in our history?

And maybe the 50 States could surrender just a bit of their sovereignty to a Federal government so that they show one face, one stance, to the rest of the world. Yeah, and that Federal government could adjudicate disputes between and among the States.

You know, like it was originally supposed to be.

lol, that’ll be a big whooosh over Jay’s head.

A return to Federalist principles is a better solution: the recognition that the 50 States are sovereign entities in and of themselves; not administrative districts for a central, national government.

Sovereign entities, each of which should be conducting the discussion of the extent of government involvement in their citizens’ lives; which discussion does not belong in D.C.

Sort of your idea, isn’t it – break the nation down into several pieces? I count 50 as being a very good number for that.

I’m counting down until the Powers-That-Be realize this is a “crisis”.

And “crises”, we all know, can’t be allowed to go to waste (Thank you, Rahm Emmanuel!).

To rebuild confidence and trust, they need to get rid of the nay-sayers. I’m waiting for the calls to end conservative media, remove right-leaning, Liberty-oriented, and pro-Constitution blogs and websites, and crack down on the Free Internet (“Free” as in “unregulated”, as opposed to the “free” [at no direct cost] Internet).

How long do you all supposed it’ll be before they try that play again?