She’s really on a roll.

If Texas politics is the wild west, then the Wendy Davis campaign is currently on a slow jog through the desert at high noon.

@WendyDavisTexas @Lisa_in_Austin This is a picture of me and I am a proud conservative. Idk how you got it. Please take down immediately

life is rough RT .@WendyDavisTexas stole a pic of our VA CRs. All out of support, Wendy? (h/t @deborahbirch, @crfv) pic.twitter.com/irZ5Wr610W”

To be fair, “@Lisa_In_Austin” no longer exists: 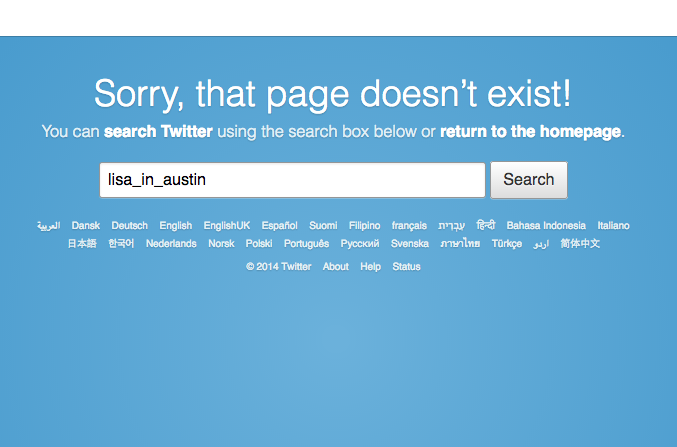 @gusportela In her defense, she didn't post the fake picture; she only RT'd it. Although, who knows. @lisa_in_austin is a fake acct.

What we have here is either the greatest troll on a political candidate ever to happen during an off-cycle, or the worst social media strategy by a political candidate doomed to lose a celebrity run for governor. As I mentioned above, account that posted the tweet Davis reposted has been deleted, which means that whoever ran the account got either very nervous or very embarrassed at all the attention their tweet received.

The Davis campaign is looking at a desperate situation. Are they in such dire straits that they’re having to astroturf their own Twitter account? Or are they such a joke on the national stage that people are making fake accounts to mock the campaign’s failure to gain ground against the Abbott steamroller?

I think what everyone really wants to know is, is it too early to declare this campaign DOA?

Is it too early to declare this campaign DOA?

No. In fact, you’re a couple weeks late, lol.

Methinks Lauren McCue has grounds for a libel lawsuit. Claiming she voted for Wendy Davis is prima facie defamation. She’s not a public figure, Wendy Davis is not a journalist, open-and-shut case.

Of Barbie’s campaign, I think you could say “put a fork in it.” Or maybe “hook it with a wire hanger.” Either way, it’s done.

Her nose is a troll target.

Not her nose… it’s that planetary-sized thing just to the left of her pie-hole. I think it’s a DNC/MoveOn attachment that makes her say some of the ridiculous things she says.

The new, softer look of the Borg.

Not working for ya, I see…

“Take this quarter, go downtown, and have a rat gnaw that thing off your face! Good day to you, madam.” — Uncle Buck

She’s not only not ready for prime time, she’s not even ready for late-late-late night infomercials. You have to be somewhat believable to sell all that crap.

Google does have a cached copy of @lisa_in_austin here.