We Have a “Truthy”-ness Problem

We Have a “Truthy”-ness Problem

Liberals are concerned about “astroturfing” online, so here comes science to save the day. 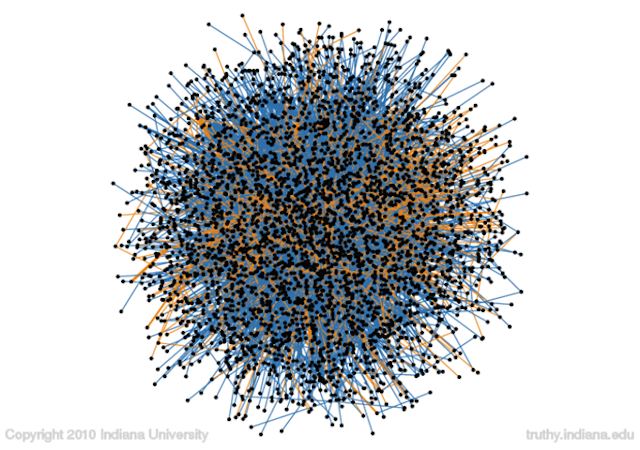 When it comes to quantifiably productive debate about politics, Twitter is the abyss. Those who choose to wade into its murky depths accept the fact that they’re jumping into the deep end with the hackers, the trolls, and the most enthusiastic dregs of internet society.

The government recognizes this, and they’re here to help.

A new project out of Indiana University, dubbed “Truthy,” is fully funded by the federal government and seeks to harvest and analyze your Twitter data. The project’s developers claim that they’ve developed a system that “evaluates thousands of tweets an hour to identify new and emerging bursts of activity around memes of various flavors.”

We also plan to use Truthy to detect political smears, astroturfing, misinformation, and other social pollution. While the vast majority of memes arise in a perfectly organic manner, driven by the complex mechanisms of life on the Web, some are engineered by the shady machinery of high-profile congressional campaigns. Truthy uses a sophisticated combination of text and data mining, social network analysis, and complex networks models. To train our algorithms, we leverage crowdsourcing: we rely on users like you to flag injections of forged grass-roots activity. Therefore, click on the Truthy button when you see a suspicious meme!

Here’s a flow chart, which contains even more science: 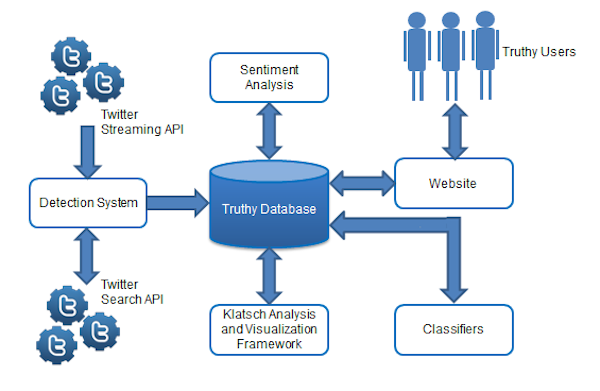 As an academic and data nerd, I can recognize the intellectual curiosity associated with this kind of research. On some level, I like it. If it were an independent project that I didn’t have to fund, I’d support it, because I think it would be interesting to see to what level each side of aisle would be willing to use a watchdog project of the federal government to complain about astroturfing.

As someone who will most definitely be targeted and reported for her tweets, however, I hate this. I hate that the federal government is funding a project that will allow citizens to tattle on each other for using a private discussion platform to influence conversations about politics.

From FCC member Ajit Pai, in an op-ed at the Washington Post:

Hmm. A government-funded initiative is going to “assist in the preservation of open debate” by monitoring social media for “subversive propaganda” and combating what it considers to be “the diffusion of false and misleading ideas”? The concept seems to have come straight out of a George Orwell novel.

The NSF has already poured nearly $1 million into Truthy. To what end? Why is the federal government spending so much money on the study of your Twitter habits?

Some possible hints as to Truthy’s real motives emerge in a 2012 paper by the project’s leaders, in which they wrote ominously of a “highly-active, densely-interconnected constituency of right-leaning users using [Twitter] to further their political views.”

God forbid the competition get out of hand, right?

The problem with Truthy is that, as Pai goes on to say, the government has no business entering the marketplace of ideas and deciding who bears truth and who bears false witness against Barack Obama the other side of the aisle. If this were a private project or political campaign using this type of analysis as a way to figure out how to increase engagement, I’d be all for it, because private entities have a stake in attempting to control the message.

The government may have a stake as well, but they have no right to do it by using researchers at a public university to monitor and intimidate private citizens.

It’s not like there’s anything urgent we need to spend that $919,917.00 on anyway. pic.twitter.com/fr4YVnyKnQ

@instapundit Anti-Free Speech…do we really expect anything else from this administration?!?

I wonder if any of those tweets have been reported yet?

… they wrote ominously of a “highly-active, densely-interconnected constituency of right-leaning users using [Twitter] to further their political views.”

… because that’s so much more evil than a “highly-active, densely-interconnected constituency of left-leaning [hacks] using [most TV networks, major newspapers, schools and universities, Hollywood, Wikipedia, the IRS, the Justice Dept., etc….] to further their political views.”

The type research I would expect from China, Russia, Iran and the EU. The type of research the US government shouldn’t be within a hundred miles of.

City officials told Donald Knapp that he and his wife Evelyn, both ordained ministers who run Hitching Post Wedding Chapel, are required to perform such ceremonies or face months in jail and/or thousands of dollars in fines. The city claims its “non-discrimination” ordinance requires the Knapps to perform same-sex wedding ceremonies now that the courts have overridden Idaho’s voter-approved constitutional amendment that affirmed marriage as the union of a man and a woman.
**********

Yeah, you KaaaWAZY Tealiban people were predicting that people would be forced to conduct weddings against their consciences.

Ahhh, the hubris of the “scientific” left and their boundless faith in predictive models. First they’re going to figure out the fluid dynamics of the earth’s entire atmosphere and reduce it to single knob (CO2 Level) that can be twisted to control global temperatures, but only if they have enough regulatory control and tax revenue. Now they’re going to control speech, and by extension our thought.

“To train our algorithms, we leverage crowdsourcing: we rely on users like you to flag injections of forged grass-roots activity.”

Gee, I wonder what will be the politic slant of those users who train the models?

This is absolutely outrageous, the government has no business monitoring and categorizing speech like this. This is just another tool that will be sitting there in the government toolbox to be used and abused by the government-employee-union thugs who dislike and punish small government conservatism.

This is just another tool…

And justification to dig in our pockets for more money.

Your tax dollars at work. “Truth” as defined by government apparatchiks.

Imagine the outcry if a right-leaning organization were attempting this and aiming at left-wing activity.

Another NSA/IRS/DOJ operation, this time overt?

Yeah scarey, another Brave New World prognostication coming true… scary because this kind of investigative technology will be another tool appropriated by both parties to manipulate the electorate.

But also scarey is the way the Washington Post mis-characterized the “motives” of the project’s leaders, claiming they were writing ‘ominously’ in a 2012 paper where they described a “highly-active, densely-interconnected constituency of right-leaning users using [Twitter] to further their political views.”

What may be ominous are the results of the study for Democrats. But the authors of the article presented them without political slant: reporting that the right was much more active and engaged in political social media then the left.

pg 3:
“We characterize a wide range of differences in the behavior, communication, geography and social connectivity of thousands of politically left- and right-leaning users. Specifically, we demonstrate that right-leaning Twitter users exhibit greater levels of political activity, tighter social bonds, and a communication network topology that facilitates the rapid and broad dissemination of political information, a finding that stands in stark contrast to the online political dynamics of the 2008 campaign.”

So where’s the ‘ominous’ liberal connection? That the left is alerted that the right is kicking their ass in the social media game now? And there’s no apparent liberal agenda at Indiana University for backing the Truthy experiment, they were among the first of those who publicly rejected the boycott of Israel, noted here on LI some weeks back.

Mind control and political manipulation is practiced by both parties — and both of them need the middle-finger, not just one.

when you fall prey to the “my team versus your team” trap you facilitate this lawlessness.

NO government agency, run by EITHER party should monitor speech like this.

history has shown both parties willing to weaponize the IRS, isn’t that enough proof for you?

of course, the Repubs had the decency to force their scumbag liar out of office.

So what happens when (not if) this nifty new project identifies certain trends not in The Narrative, such as global cooling or a certain tendency for our news media to lie their socks off about Republicans?

(Answer: Poof, down the rabbit hole goes that particular data, never to be seen and never to be admitted existed)

Naw… THAT’s just one of those crazy Teahadist fever dreams.

ALONG with the very real yellow-cake AND the program to reconstitute Saddam’s nuclear ambitions.

AND the fact that the Congress authorized the war on…what…23 predicates, ONE of which was WMD.

Joe Biden was in charge of going ‘line-by-line’ through all this stuff to ensure our money is well spent, so I’m sure it’s all good, mmmkay?

Once the government-funded, government-approved “filter” checks your Tweet, you will be located by a drone, grabbed by the Militarized Local Police and whisked off to a FREE government-run re-education camp, where your nasty Twitter habits will be…. corrected.

What on earth could possibly go wrong?

“You do not have any reasonable expectation of privacy in your own driveway.”

If this wasn’t my first comment at L.I., I’d run up the links.

Regardless of the ruling, do you really think El Guapo and the Totalitarians actually give a rat’s you-know-what about violating any and all parts of The Constitution, Bill Of Rights, US Code, plus state and local laws ?