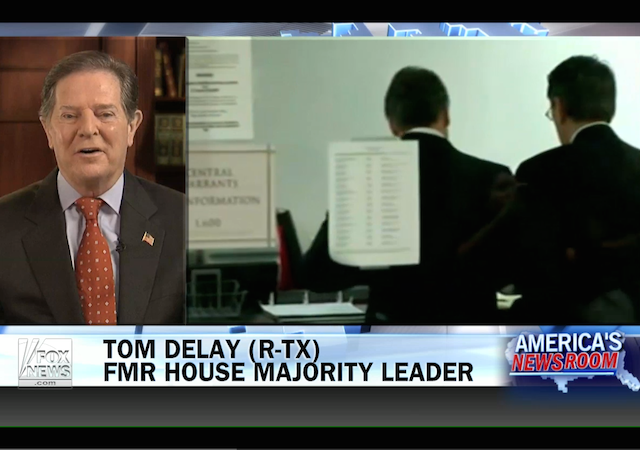 The panel in an 8-1 vote held that the state failed to prove that corporate contributions made to Republicans running for seats in the Texas legislature in 2002 violated Texas Election Code. This ruling affirmed last year’s overturning of the conviction by a lower court.

We covered that earlier reversal, Which office does Tom Delay go to, to get his reputation back?

From the Capitol City Project:

“I understand what it’s about and it’s about … the criminalization of politics and the misuse of power … and prosecutorial misconduct,” DeLay said Wednesday.

The Texas Court of Criminal Appeals ruled 8-1 that the state did not sufficiently prove that DeLay funneled money as part of a plan to redraw congressional district lines in the state. He was accused of laundering $190,000 to fellow Republicans running for the Texas Legislature back in 2002.

Earlier this year, Leader DeLay spoke out against the similar targeting of Texas Governor Rick Perry by the Travis County District Attorney’s Office:

“This is intimidation, it’s criminalization of politics, it is a strategy of the left to take out their enemies in a different way,” DeLay said on “America’s Newsroom.”

“Every time someone tries to change it, the district attorney of Travis County threatens them with an investigation. And that just scares the living bejesus out of an elected official.”

A grand jury in Austin, a liberal bastion in otherwise largely conservative Texas, indicted Perry on Friday for carrying out a threat to veto $7.5 million in funding for the state’s public integrity unit after Travis County District Attorney Rosemary Lehmberg, a Democrat, refused to resign following a drunken driving arrest.

DeLay believes Perry will “eventually beat” the charges, but it may take years to sort out and put a “clout” over a potential presidential run in 2016.

“Supports will think twice, they’ll wait for him to get rid of this before they move forward, and frankly, you can’t have that in a campaign,” he said.

According to the Washington Post, Perry’s indictment hasn’t hurt his popularity with Texans. 57% of registered voters approve of the job he’s done as Governor of Texas, and a comforting 72% believe that the charges against Perry are political.

Former Travis County Prosecutor, Ronnie Earle, did his part. Now, Øbama needs to do his part and pony up that Federal judgeship or ambassador job to someplace fun, like Barbados, Monaco or Vegas. After all, with the help of the Fifth Column Press, ol’ Ronnie brought down Tom “The Hamma'” Delay!

I still say, move the capitol to Midland, and let the Midland County DA have a crack at some DemocRATs.

“…a comforting 72% believe that the charges against Perry are political.”

Yes, that is a comfort.

On the other hand, it is disconcerting to know that 28% of Texans are either undecided or think the charges are well-founded. I mean, just the implications for the literacy rate from that are depressing.

But that seems to be a reality we need to deal with…that twenty-something percent of the voting-aged people in any state are functionally too stupid to live. Or perhaps just too stupid, mean, hateful, insane to allow to vote.

This would go far to explain why there is a floor in the thirties for Pres. ScamWOW’s approval rating.

I live in Austin and I don’t believe 28% of the population here are stupid enough to think the charges have a basis in law. I think what we have here is a critical mass of flaming liberal, dyed in the wool Marxists, who never leave their little prog echo chamber. They’re so totally immersed in their loony leftist fantasies that they are actually OK with this sort of abuse. They’re fascists actually, and they think the ends justify the means, and of course the means are always about good intentions (theirs). We have some seriously abusive DA’s in this state, and they never seem to pay for their misdeeds.

I see the big exodus of people from the liberal state like CA and I always wonder where they were going to in Texas. Then I went to visit a friend in Austin, Holy cow that place has grown.

This gives me the chance to restate my “voluntary moron” theory.

A person of even high native intelligence can volunteer to be a moron by the embrace of delusional thinking. There is no functional, apparent difference between an organic moron and a voluntary moron, except the latter is more apt to articulate how stupid they are…say as a troll or a Collectivist voter.

Rags, I cannot convey how much your comment helped my morning coffee. Thanx.

Much delusional thinking is avoidance of cognitive dissonance. It’s the critical, “I just don’t want to think about it” approach. The pulling of the wool over one’s own eyes.

When you confront a Lefty with a cold, hard, undeniable fact, it’s the shattering of that self-made bubble that is often heard emitting from their open mouth. Next, they put their fingers in their ears and start up loudly with, “Lalalalala… I’m not listening…. lalalalalala…”

Which office does Tom Delay go to, to get his reputation back?

File suit for Malicious Prosecution, Defamation by damage to reputation, Violation of the United States and Texas Constitutions (1st, 4th, 5th and 14th Amendments), and further violation of Delay’s Civil Rights under 42 USC 1983. Also, a command in Equity that DA Lehmberg and Ronnie Earle issue both written and VIDEO RECORDED apologies to Rep. Delay.

The mere BRINGING of the suit should make each and every one of the lower-level individuals scream for mercy toward making a deal to point the finger at Earle (and later Lehmberg) as the ones making the decisions to prosecute and that their decisions were based in politics, not in law. Offer to the County to settle with each of them for $500K.

Use it to bankrupt Travis County. Make the local government there take it out of the District Attorney’s budget. Delay can, and should, bleed the County dry, and then say “you wanted this fight, now I’m going to make you PAY for it.”