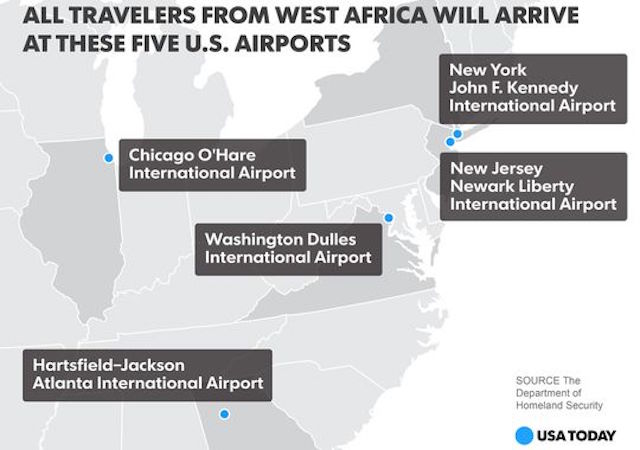 Today DHS imposed a set of travel restrictions that will funnel all travelers coming from countries suffering from Ebola outbreaks through 5 major airports in the U.S.

The White House is confident that these measures will help “ensure the safety and security of the American public.” Via The Hill:

“This is a situation where the DHS had to work with the airlines that are flying passengers from a wide variety of countries from Europe to the United States. It did require some work with the State Department to inform other countries. So there’s a lot of coordination that had to go into developing and implementing this policy.”

The White House said it remains opposed to a flight ban, which the president and health officials argue would be counterproductive.

“The fact of the matter is giving individuals an incentive to conceal their travel history only puts the American public at risk. … It makes it harder for us to determine which individuals need to be subjected to the screening that we’ve described,” Earnest said.

Although this move hasn’t stopped calls from both sides of the aisle to go further with restrictions, at least we’ll be able to control movement until we execute initial screenings.

“These airports account for about 94 percent of travelers flying to the United States from these countries,” Johnson said. “At present there are no direct, nonstop commercial flights from Liberia, Sierra Leone, or Guinea to any airport in the United States.”

[Homeland Security Secretary Jeh] Johnson stopped short of announcing a full ban on travel between the three nations and the United States, despite increasing calls from members of Congress to do so. The White House has said as recently as last week that it opposes such a restriction. However, Johnson added: “We are continually evaluating whether additional restrictions or added screening and precautionary measures are necessary to protect the American people and will act accordingly.”

Senator Marco Rubio (R-FL) plans to introduce a “next step” bill that would ban new visas for travelers coming from Liberia, Guinea, and Sierra Leone.

Pres. ScamWOW leads from half his behind.

Half assed, to be clear.

All arriving passengers will be patted down by Republican TSA employees and driven, free of charge, to any Tea Party events in the area.

“The fact of the matter is giving individuals an incentive to conceal their travel history only puts the American public at risk. … It makes it harder for us to determine which individuals need to be subjected to the screening that we’ve described,” Earnest said.

Conceal their travel history? The passenger’s nationality and travel history is right there on their passports and, if required, travel visas.

If we can’t figure out a passenger’s travel history, then we need to dissolve the TSA and DHS. Travel screening is exactly their main job.

The scariest five words I can think of right now: “The White House is confident … “

Sure, dump the infected travelers into major metropolitan areas. Brilliant!

I guess they never heard of passports/visas.

By “They” I mean republican politicians/pundits. Everytime I hear one of them debate a lib on the subject, they never counter the lib’s preposterous argument that they won’t be able to track people with this new fangled, high tech tracking system called “passports”.

Further, they, meaning republicans, never state the obvious. So, someone shows up at JFK from Liberia with a fever, and is found to have ebola. The system worked.

Ebola has, once again, come to America.

Liberian person goes to apply for ANY kind of visa to the U.S.

“Sir, you will need to be quarantined for the next 21 (at least) days.”

“No, sir. Not really. You would have to give us at least that long to process your visa application in any circumstance.”

Most, if not all, the people coming from those countries are black.

That’s the reason for no travel ban right there. We don’t want to be profiling blacks for anything at all. Surely that would be race-based discrimination.