Texas Gets a Stay, Saves Voter ID for November

Texas Gets a Stay, Saves Voter ID for November

Fifth Circuit strikes down decision changing the rules too close to election day. 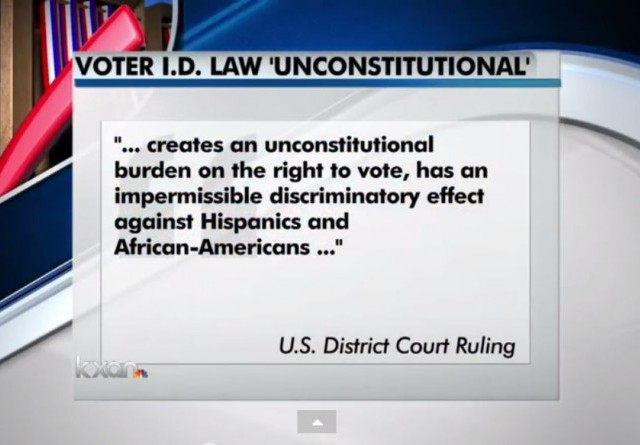 An en banc ruling of the Fifth Circuit has issued a stay against last Friday’s order striking down Texas voter identification laws.

The Court looked at four key factors when deciding whether or not to grant a stay pending appeal: (1) whether the stay applicant has made a strong showing that he
is likely to succeed on the merits; (2) whether the applicant will be irreparably injured absent a stay; (3) whether issuance of the stay will substantially injure the other parties interested in the proceeding; and (4) where the public interest lies.

The first two factors are the most important, and the court focused on them when deciding to issue the stay. First, the court looked to the Supreme Court’s tendency to preserve the status quo on the eve of an election in order to protect the process from confusion and misapplication of the rules.

Here, the district court’s decision on October 11, 2014 presents similar logistical problems because it will “be extremely difficult, if not impossible,” for the State to adequately train its 25,000 polling workers at 8,000 polling places about the injunction’s new requirements in time for the start of early voting on October 20 or even election day on November 4. The State represents that it began training poll workers in mid-September, and at least some of them have already completed their training. The State also represents that it will be unable to reprint the “election manuals that poll workers use for guidance,” and so the election laws “will be conveyed by word of mouth alone.”

Then, the court examined what other stays previously granted by the Supreme Court had in common with one another. In the opinion, the court emphasized that “the common thread is clearly that the decision…would change the rules of the election too soon before the election date,” and that “the timing of the decisions rather than their merits seems to be the key.”

The court decided both that the State was likely to succeed on the merits of its case (at least as far as their argument that the rules should not be changed so close to an election is concerned,) and that the state would indeed be irreparably harmed if the rules were changed so close to Election Day. They also agreed that because “the election machinery is already in motion, the public interest weighs strongly in favor of issuing the stay.”

Of particular note to attorneys is the concurrence from the lone Obama appointee on the panel:

We should be extremely reluctant to have an election take place under a law that a district court has found, and that our court may find, is discriminatory. As always, however, we must follow the dictates of the Supreme Court. In two recent decisions, it stayed injunctions issued based on findings that changes in an election law were discriminatory.
…
I agree with Judge Clement that the only constant principle that can be discerned from the Supreme Court’s recent decisions in this area is that its concern about confusion resulting from court changes to election laws close in time to the election should carry the day in the stay analysis. The injunction in this case issued even closer in time to the upcoming election than did the two out of the Fourth and Sixth Circuits that the Supreme Court recently stayed. On that limited basis, I agree a stay should issue.

@MikeScarcella Note the reluctant concurrence from Judge Costa, the one Obama appointee on the panel.

Last week’s ruling came as a shock to analysts who believed that the panel would not rule until after Election Day.

My experiences with voter id…
1. After I moved into my house, the voting location was changed and I got the voter cards for the previous owners. I called the election board to state that they did not live in my house and had moved out of state. They would not remove the people from the rolls until they had not voted in x number of elections. I checked every election to see if they had voted. It would have been very easy for me to hand those cards to someone who lived in another part of the city. I didn’t because that would have been fraud.

3. Yes, I said church. I used to vote at a school, but that got disruptive. Then it was the local armory which was nixed after 9/11. So, most people vote at churches – large parking lots with doors leading into a large multi-purpose room.

4. The Voter ID law requires a photo id, but if you don’t have one, then you can use the free voter card that was mailed to you after you registered to vote. If you refuse to show any ID, then you vote with a provisional ballot and it is not run through the scanner, but is placed in envelopes to be checked by the election board. This is probably why our law has not been challenged. Most people show their drivers license. The election workers always liked it when I showed my id before it became law since it was easier to find my name in the book.

“An en banc ruling of the Fifth Circuit has issued a stay against last Friday’s order striking down Texas voter identification laws.”

Using photo ID at the polls in Kansas is actually *easier* than before. No longer do I tell the half-deaf little old lady with the book what my name is, spell it, correct the spelling, verify that yes that is my name there on the line, not one of my relatives with the same last name, etc… Now I just show my driver’s license, she flips to the right page, I sign, pick up my ballot, and go vote. Easy.

Has anyone ever demonstrated that “Hispanics and African-Americans” who wish to vote — and who are legally qualified to vote — actually have special difficulty getting ID? Or is it all a matter of racial condescension?

I recall some anti-ID activists dredging up a young Hispanic woman in Texas who claimed that she had no means of getting to the nearest place where ID could be obtained, but somehow she was able to make it to Washington D.C. to testify as to her complete and total lack of local transportation opportunities.

If you cannot figure out how to obtain a voter id – perhaps you should not be voting. You might accidentally hang yourself on the curtain around your booth – or poke out your eye with the stylus.

No, they don’t have special difficulty getting ID’s. Most states provide state ID cards if someone doesn’t have a driver’s license.
What the latest howl is that so many black Americans’ were born at home and never had a birth certificate, to which I say, BS. Maybe Ella Mae, born in a shack in the south 90 years ago, but the vast majority of voting population of minorities have ID’s, cell phones, internet access, vehicle transportation ,etc.

The desperation about ID’s is that so many Democrat voting organizations go out, pick up illegals, especially in sanctuary cities, and bus them to polls, instructing them to vote straight Dem. ticket. Without needing ID’s , these people are given ballots, and I dare say, their votes counted.

Of course, then there are those states that give illegals driver’s licenses, such as California…….

Seriously, how easy is it to register today with a fake ID or in a state that doesn’t require ID’s. How easy is it to vote in several states, such as snowbirds have bragged about doing in Florida and their home state?

That was my thought, too. “Racial condescension”.

Here in Oregon, ALL voting is done by absentee ballot, and there’s no “voter ID law” in place, but they still have ways of verifying identity. Let me explain:

The “packet” (really just three or four forms) at the DMV includes voter registration. When you get a driver’s license, you are automatically registered to vote if you’re over 18. This is acceptable to me, as it’s currently a state law that illegal aliens (*snort* “undocumented immigrants”) are not eligible for a driver’s license (being challenged by ballot initiative … again). A valid Oregon driver’s license is as good as proof of citizenship, because citizenship is required to get one (for now).

Part of the process of voting by absentee ballot here is that every envelope must be signed by the voter. If it’s not signed, it’s immediately rejected. The signature is scanned and compared to the signature on the voter registration. If they’re significantly different, you get a call/postcard, and your ballot isn’t counted until/unless you show up to the elections office – in person – to show picture ID and re-sign. If your signature has “evolved” over time (most people’s do), they ask you to fill out a new registration card with a current signature, and your vote is taken to be counted.

Yes, this has happened to me. No, it wasn’t a big production; the elections people were understanding and professional and keep later hours to allow “eight-to-fivers” to fix it without missing work. It’s really not the world-ending thing the race hucksters are portraying it to be!

Hell, most of us had no problem getting a fake ID when we were 18 that showed we were old enough to buy beer. If you aren’t motivated enough to bother then you probably don’t really need to vote anyway.

Speaking of Texas, how is this even remotely legal?

That’s the result of six years crapping on the Constitution. It trickles down.

But she’s gotten a taste for power, is term-limited, and now thinks she has to make moves to put herself in the Collectivist big girl (boy…whatever). She crammed through an “ALLLLLL sex” restroom (among a lot of other stupid things) law that a lot of people in Houston just are not standing for.

This is her war on those she thinks oppose her. Except for the black churches, who also oppose her, but…racist…