Shockingly, carrying mattresses around campus to protest “rape culture” not catching on

Shockingly, carrying mattresses around campus to protest “rape culture” not catching on 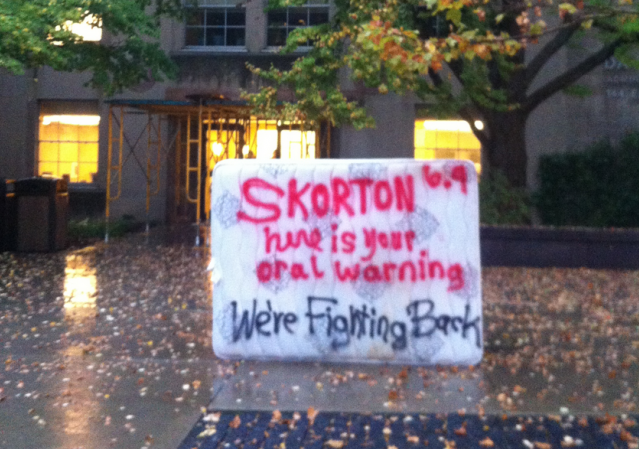 A few weeks ago, we covered the story of Columbia student, Emma Sulkowicz, who alleged she was raped by another student.

Rather than pursue the matter all the way through the legal system (she dropped her case), Sulkowicz took her case to the University tribunal. Her alleged rapist was not found guilty by the campus tribunal, so Sulkowicz decided to protest her trauma through performance art (and college credit) and carry a mattress around campus as long as her alleged rapist remained on campus.

Carrying the mantel of Sulkowicz’s cause, what was supposed to be a national day of action and a million mattress march, was not widely protested.  The only two protests we could find are at Texas Tech and Cornell.

Some Texas Tech University students have demonstrated against what they say is a “rape culture” on campus by laying bed sheets spray-painted with “No means No” at three locations.

The women’s actions Wednesday came a day after university officials sent an email to students and faculty that called activities at a recent off-campus fraternity party “reprehensible.”

A picture of a banner at the Sept. 20 Phi Delta Theta fraternity gathering, briefly posted online, read, “No means yes,” followed by a graphic sexual remark.

University spokesman Chris Cook said the school learned of the banner the day after the party and began investigating immediately. Last week the university established a task force to review Greek organizations.

The bed sheets displayed Wednesday were removed by police after about 30 minutes.

Cornell took the call to action more seriously and approximately one hundred students showed up to protest.

According to Casey Breznick at The Cornell Review (he also writes for Legal Insurrection and College Insurrection), a National Day of Protest Against Rape Culture took an odd turn yesterday. The protest was co-sponsored by Students for Justice in Palestine, Black Students United, Crunch: The Kinky Club at Cornell, Cornell Organization for Labor Action, the Cornell Progressive, DASH: Direction Action to Stop Heterosexism,Women of Color Coalition, and Grrls Fight Back.

The protest was meant to be the decisive blow to “rape culture” on Cornell’s campus. To that end, students read poems aloud. Breznick reports:

Shortly after the event started, it began raining heavily and the event was moved inside Willard Straight Hall, the central campus student union adjacent to Ho Plaza. The poor acoustics of Willard Straight’s main atrium, in addition to the noises of rain, thunder, and incoming and outgoing students, made it difficult to hear everything the speakers said. Therefore, Review correspondents could not determine the names of the first two speakers, the first of whom, a female, spoke about how anyone can be a rapist, and the second, a male, who read a poem.

Students responded favorably to the first speech, but looked confused when listening to the poem, whose central theme remains unclear. After the male student finished reciting, nobody clapped or applauded until he started snapping himself.

After a brief lull in activity, one of the event’s three organizers … read an approximately 9-minute speech/poem (it had qualities of both) concerning her personal experiences and attacking rape culture, saying that the institutions that promote it–Cornell, the Justice System, and the “white supremacist, imperialist, capitalist, cisheteropatriarchy”–must be destroyed…..

After the protest concluded, [students] spray painted a mattress with text reading “Skorton [President of Cornell University] here is your oral warning/We’re fighting back” along with the number “6.4.” Students affiliated with the protest said the number is in reference to Cornell’s “Prohibited Discrimination, Protected-Status Harassment, Sexual Harassment, and Sexual Assault and Violence” Policy 6.4. The policy reads that disciplinary action for those accused of sexual assault “may include oral or a written warning.”

The mattress then was carried briefly around campus:

The Cornell Daily Sun also reported on the protest:

Cornell students joined students on campuses across the country to protest rape culture during the National Day of Protest Against Rape Culture in Willard Straight Hall Tuesday evening.

The event was organized to show solidarity with Emma Sulkowicz, a senior at Columbia University and rape victim whose performance art demonstration — where she carries a mattress everywhere she goes on campus — “has made a national impact by rejecting this expectation that survivors bear their abuse alone, so that life can continue unimpeded for the perpetrators and institutions of rape culture,” according to the event’s Facebook page.

Sulkowicz has been supported by peers and activists throughout the nation in criticizing Columbia University’s failure to appropriately address sexual violence on campus, according to the Huffington Post.

The Cornell event is part of Sulkowitz’s performance and participating students are encouraged carrying around mattresses or pillows to mimic her performance.

There were many protesters in the crowd holding pillows to show support for Sulkowicz.

It the National Day of Protest is any indication, the tactic of carrying around a mattress as a form of protest is not catching on.

“The protest was meant to be the decisive blow to “rape culture” on Cornell’s campus.”

You really should be careful with anything that could have a double meaning. Just saying.

After the protest concluded, [students] spray painted a mattress with text reading “Skorton [President of Cornell University] here is your oral warning

These are Ivy League students and they don’t know the difference between oral and written? Clearly a Cornell education was wasted on them.

Those mattresses are heavy. Girls don’t do heavy lifting.

Maybe they can get some guy to carry it for them.

Wonder what they could offer a guy to do all that work?

And a vicious cycle revs up and takes off!

RE: and college credit

After watching that video, I do think that they should receive PhyEd credit.