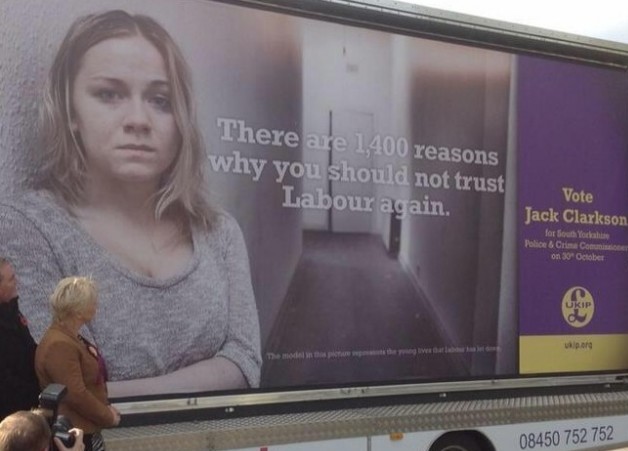 Hey RNC! Are you taking notes?

This is how its done! No more bringing knives to gunfights…

It regards a campaign truck in a local election carrying a poster referring to the abuse of at least 1400 girls, as authorities did nothing.

We wrote about it in late August, Political correctness helped cover up child sexual exploitation in Rotherham:

In Rotherham, England, a group of Pakistani immigrants and others of Pakistani descent deliberately targeted white teenage girls for sexual exploitation, with a religious angle to the targeting.

The authorities knew of the exploitation, but were fearful of talking about it or going public with it for fear of being called racist or Islamophobic.

So the abuse continued for over a decade, with approximately 1400 girls gang raped and otherwise sexually abused. It’s all detailed in The Independent Inquiry into Child Sexual Exploitation in Rotherham, 1997 – 2013 ….

The poster was tweeted out by Nigel Farage, leader of the UKIP Party, which is gaining strength.

We mustn't forget the child victims in Rotherham and beyond. But we must remember who let them down… pic.twitter.com/VzdS9PEZgJ

Getting back to the reader email, what would our poster be?

There are 20-30 million (maybe more) reasons why voters should not vote Democrat. They are illegal aliens, thousands of whom are violent criminals, many others of whom carry contagious diseases, and the vast majority of whom are unskilled and uneducated, soon to be welfare beneficiaries that the taxpayers of this country can’t afford to support.

The UKIP is gaining members from both Labour and the Tory parties. Driving it seems to be the fact that most mainstream Britons are sick of both multiculturalism, along with its one-way demand for tolerance, and runaway immigration, where the newcomers go straight to the Dole.

How about a poster on black unemployment with the tag line “Are we going to let the Democrats continue to steal their dreams?”

Excellent. There would also need to be a site to go to where the stats, the supporting info. would back up the assertion. And there is lots of it: the black unemployment rate, the number in prisons, the number on SNAP and welfare……the list goes on.

Yes, and this ought be the caption …

“A dream is a terrible thing to waste.”

Beauty of that is when the college fund rebels, it gets press.

The Rotherham horror tells us MANY important lessons.

One of them is the appalling effects of a PC environment.

Another is the cardinal error of allowing mass immigration of an insular, non-assimilating group with values not only foreign, but adverse to the national culture.

Still another is the awful consequence of BIG GOVERNMENT, which only pretends to do things well, and takes the ability of individual people away in the process. Many of the victims of Rotherham were “in care”…which clearly translated to “no care”…and had been removed from their families for little or no reason.

Amazingly, Rotherham Social Services attempted to take some children away from their family purely on the grounds that their parents voted for UKIP! You couldn’t make it up.

Or the same thing with young people in a standard, happy, cap-and-gown college graduation photo?

Youth unemployment is preposterously high. We have a chance to really win over the next generation of voters on this.

That was meant to be: “Are we going to let the Democrats continue to steal their dreams?” over a standard happy college graduation picture.

The LSM would likely refuse to air such an ad … America has been “pussified” beyond recognition.

That word “pussified” is offensive to my cat. I demand you stop using it.

I’m thankful that nothing like what has happened in Rotherham—the abuse, the turning-a-blind-eye, the PC run amok—has been discovered here. So far. That we know.

It was never about “the children”. Children are either a “burden” or a commodity. It was always about money, sex, power, and ego gratification. Well, that, or minority fitness. Either way, the human beings are interchangeable (i.e. “diverse”) and disposable (i.e. “nonviable”). Incorporated civil and human “rights” campaigns, as well as the “choice”, have far reaching — predictable — consequences.