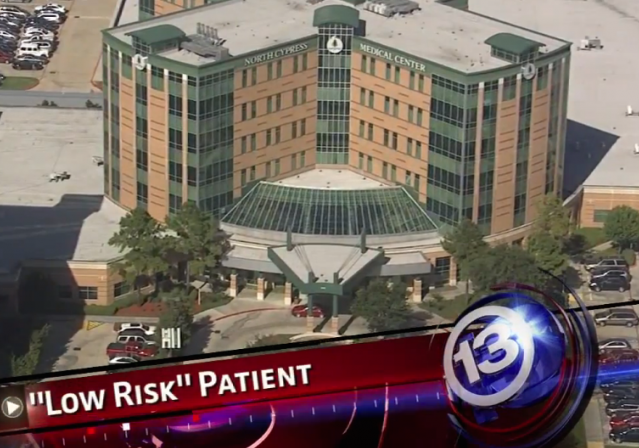 Thankfully, Governor Perry put together a Task Force on Infectious Disease Preparedness and Response. The task force, “will assess and enhance the state’s existing capabilities to prepare for and respond to pandemic disease, such as the Ebola virus.”

Perry also, “called on the federal government to immediately begin enhanced screening procedures at all points of entry, including obtaining additional information, checking temperatures and staffing quarantine stations to help prevent the disease from entering the country.”

According to a local ABC News affiliate:

A hospital in Cypress says it is treating a patient with an “extremely low-risk” chance of having Ebola.The North Cypress Medical Center, located along the Northwest Freeway, says the patient was admitted Monday and is being monitored. The hospital issued the following statement about the patient’s admission:“North Cypress Medical Center is treating a patient who has not been diagnosed with ebola. He is considered to be of extremely low risk to the ebola virus. Hospital personnel are taking all precautions as prescribed by the Harris County Health Department and the U.S. Center for Disease Control. The patient is in stable condition and is showing no signs of a fever. Admitted earlier today (October 6th), he has been isolated from other patients. We are working closely with local health and CDC officials who will determine all the steps we need to take to ensure the patient’s recovery and the community’s safety.” Over the weekend, it was thought a person in Katy may have had Ebola, but that turned out to be malaria. The health department says they’ve conducted two Ebola tests on patients in the Houston area. Both have come back negative.

In other Ebola news, the first case of Ebola infection in someone who did not contract the virus in Africa was reported today in Spain. The woman who treated a Spanish priest and a Spanish missionary after they contracted the virus has tested positive. Both individuals died from the virus, and the woman is currently receiving treatment.

The woman helped treat a Spanish missionary and a Spanish priest, both of whom had contracted Ebola in West Africa. Both died after returning to Spain.

Health officials said she developed symptoms on September 30. She was not hospitalized until this week. Her only symptom was a fever.

“We are working in coordination to give the best care to the patient and to guarantee the safety of all citizens,” the health minister said.

An investigation is under way to find everyone the assistant may have had contact with while contagious. So far, there are no other known cases.

The assistant was one of about 30 health professionals in Spain who helped to treat the Ebola patients.

Don’t worry. Our government told us not to worry. The CDC promised us there’s a low risk. So don’t worry.

“it was thought a person in Katy may have had Ebola, but that turned out to be malaria.”

It’s a bad day when “You have malaria” is the GOOD news.

All intentional, and part of the ‘plan.’

Had it not been Ebola, it would have been some other crisis the fascists running our government could exploit to overcome the constraints upon them by our Constitution.

The Nazi party of the 1930s would be quite proud of the American left, and amused by the idiots the GOP has put in the way to oppose them.