Parliament Shootings an Act of Terrorism

Parliament Shootings an Act of Terrorism 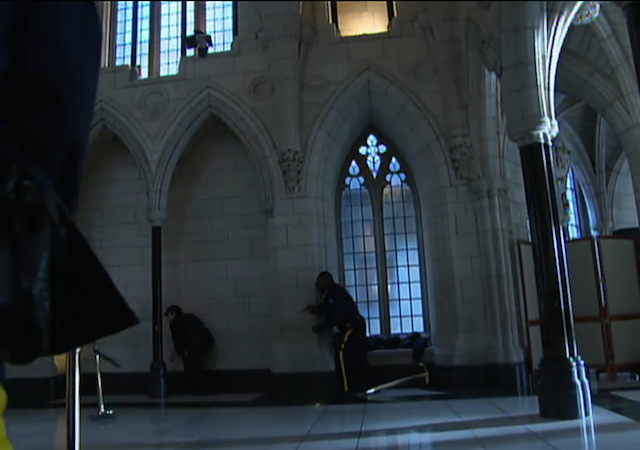 Canadian Prime Minister Stephen Harper had strong words for the attacker who opened fire at the National War Monument before moving on to the halls of Parliament in Ottawa on Wednesday.

Harper’s comments come in the wake of the fatal shooting of Cpl. Nathan Cirillo, 24, who was a reservist in the Canadian Forces, by Muslim convert Michael Zehaf-Bibeau.

“This week’s events are a grim reminder that Canada is not immune to the types of terrorist attacks we have seen elsewhere around the world,” Harper said in his address to the nation. “We are also reminded that attacks on our security personnel and our institutions of governance are by their very nature attacks on our country, on our values, on our society, on us Canadians as a free and democratic people who embrace human dignity for all. But let there be no misunderstanding. We will not be intimidated. Canada will never be intimidated.”

The attack began just before 10 am on Wednesday, when Zehaf-Bibeau fired on the ceremonial guard at a war memorial across the street from parliament. It was here that Corporal Nathan Cirillo was shot; he later died from his wounds.

Zehaf-Bibeau then made his way past armed guards and into the building where MPs from both parties were caucusing. Kevin Vickers, the House of Commons sergeant-at-arms, shot Zehaf-Bibeau dead before anyone else was injured.

According to the Guardian, officials have not yet released information regarding the shooter’s motive. His attack, however, comes just after Canada’s decision to join forces with the United States to defeat ISIS in the Middle East:

Harper acknowledged there were unanswered questions about the attacks but offered assurances to his shocked nation that Canada’s security agencies would take all necessary steps to “identify and counter threats”, both homegrown and abroad. The Toronto Star reported earlier this week that the Canadian Security Intelligence Service has limited resources with which to track the roughly 80 Canadians who have travelled abroad to join terrorist groups and then returned home.

Earlier this month members of parliament voted to join the US-led bombing campaign against the al-Qaida splinter group Islamic State.

On Tuesday Canada elevated its domestic terror threat from low to medium. “The decision to raise the level is linked to an increase in general chatter from radical Islamist organizations like Isil, al-Qaida, al-Shabaab and others who pose a clear threat to Canadians,” said a statement from the ministry of public safety and emergency preparedness.

Wednesday’s terror attack emerged in the wake of another attack by a radical jihadist who ran down two soldiers outside a strip mall near Montreal.

I’m a big hockey fan (Toronto Maple Leafs, even though I’m a NY’er) and found out about this event via an NHL Gamecenter alert, of all things. Their game last night in Ottawa was postponed and the team was locked down in the Westin Hotel right next to the shootings. I’m happy to say most Canadians on the Leafs forum are reacting the way we sane people did to 9/11 (with outrage, pride, and stiff resolve) and are NOT politically correct. But most bemoan the insurgence of political correctness followed by the influx of Islamic radicals into Canada just as we do here.

It’s sad to see Canada touched by Islamic terrorism, but not surprising. There will definitely be a flavor to the kinship between our 2 countries that didn’t exist before. They’ve just gotten their wake-up call to the fact that safety and security are merely illusions in a world where placating the enemy seems far more important than protecting the citizenry. Though they don’t have anyone as dangerous at the top of their government – as far as I can tell – as President 0bola.

Harper … definitely not a Muzzie.
0B0LA … not so sure.

Funny how so very many of the news reports are leaving out the fact that this jihadi is the son of the Canadian Minister of Immigration . . . . .

Is that true??! I’ve read a lot about this and never saw that! Minister of Immigration – you can’t make up such stupidity.

It’s not true, but it’s also not far off. His mother is.. what was it.. vice chairperson of the immigration board for the immigration and refugee department, along those lines. So a very high ranking civil servant with more actual power over immigration than any minister I’m guessing…

OK, not exactly the Minister of Immigration. The mother was in the Immigration dept. and the father may be Libyan and they’ve been divorced since 1999. Son converted and is mentally unstable (aren’t they all).

One of my first thoughts on learning the young corporal guarding the War Memorial had been shot was, “Did he have live rounds?”

It strikes me as just short of criminal to stick someone out in dress uniform to guard a high profile target, and make the weapon they carry nothing but a prop.

They ought to have the ability to defend themselves, and the thing they guard. Especially the Canadian War Memorial, or our own Tomb of the Unknowns.

How can anyone down thumb your comment? I mean … really!

Rags has his own personal Trolls, who he routinely spanks for being morons.

They’ve taken to down voting him because they routinely fail at arguing with him on ideas, and he has no qualms about explicitly pointing out their failures.

Rags treats those troll votes for what they worth–proof that you catch the most flak when you’re over the target!
Keep ’em coming, Rags!

The French soldiers who patrol around the Eiffel Tower and the Hotel de las Invalades are definitely armed and presumably willing to shoot. I watched them change guards just outside the area of the Eiffel Tower, near the Sidi bel Abbes Metro. The ending watch cleared their obviously loaded FAMAS assault rifles, while the beginning-watch carefully checked their magazines before loading and charging their weapons.

Both they and the French police are quite good, and will shoot you grave-yard dead with well-aimed bursts of fully automatic fire.

the trolls thumbing you down Rags are just too stupid for words. There is nothing wrong with this comment.

When I was in the US Army we guarded the ammo depot with an unloaded shotgun, but they gave us one shell which had to remain in our pocket.

I’ve been to Parliament Hill several times. When I was a student, I did a work term with the National Research Council and boarded with a family, the head of which worked in Centre Block (where all this took place). He took me around after hours and gave me the “real” tour. I was there just this past spring (along with nearly 100 other like minded Christians) visiting with MPs from all parties from all parts of Canada to discuss our concerns for our country and, in many cases, to pray with them. I had the privilege to meet one MP in the government lounge right beside the chamber.

In all this, I have to say I’m rather proud of the fact that our legislators do not govern from a fortress. Like all such things, if that changes, we will have lost a battle.

I also learned something about the nature of symbolism too.

I understand why the guards at the memorial are unarmed. The dead do not need physical protection; the protection afforded by those who stand is both deeper and more important. I am thankful for our men and women in uniform who perform this act of service on my behalf as well. I think, though that Ragspierre is correct (if not in the way he meant) and the War Memorial (and all like it) needs to stand not only to remember the past protection of our freedoms but also its ongoing protection. And in that light those who stand guard do not guard the Memorial, they become an intrinsic part of it.

At the same time. Sergeant-at-Arms Kevin Vickers reminds us that a symbol must possess the power of the thing it signifies to have any meaning. Despite wearing a funny hat, carrying a heavy and garish mace and thin little sword, his job is to ensure the physical security the House of Commons to do its business. We see the ceremony and think only how quaint and dated that is, but on Wednesday he proved otherwise.

This is something we need to be more mindful of. If we have a ceremonial role, or make use of some symbolic object we have a responsibility to ensure that the thing signified can attained by the use of it. If not, then you are just putting on airs and we have enough of that.

I gave you a ‘thumbs up’ because I partly agree with and appreciate what you said.

I violently disagree with some other parts.

Of course the dead need no protection, at least in a sense. But the War Memorial is not “a dead person”, and such places are not attacked as just places of internment for someone. They are places of nationally focused reverence and assertion of our best Western values.

THOSE are values that ARMED soldiers HAVE, DO, and MUST defend. And they should defend the symbols we have that focus our minds and hearts on them in the same way.

If you want an unarmed guard to “guard” them, find ANY OTHER organization to do that. The ARMED forces should NEVER be confused as to their role and use. Get the fire department to “guard” the War Memorial.

Let the ARMED forces always be clearly associated with LETHAL resistance to any affront to the values that make us who we are.

I don’t think Canada ever considered the Tomb of the Unknown Soldier to be a high profile target before.

For those with actual appreciation for history, it’s a very specific act of spitting on the graves of all Canadians who’ve fought in WWI and WWII for the better values of humanity in those conflicts. It’s desecrating a tomb, a low blow.

The CBC (Canada’s NPR, and widely followed here) refuses to use the T-word.

Political correctness is a terrible plague, and it will kill, maime, and even manage to get a LOT of people raped.

But the worst effect is to rob people of freedom. See Orwell.

My money is on the Guards had no ammunition for their weapons.
Anyone carrying an empty rifle should have an orange cap in the barrel like they have on the children’s toys.
Ok, mt prayers go out for our lost Soldier.
Even though he is Canadian, he is ours just the same.
But the practice of disarming Soldiers is an insult to them as well as the rest us.
Again, they were denied their right to self defense, and were painted as targets by carrying arms.
I applaud Harper’s decisive evaluation, and ask that he might consider addressing the former issue.
Too many have been lost due to this insanity, and it was those who have volunteered to give their lives for their country.
If they cannot bear arms… what is the point?

And the CDC will call it workplace violence, I’ll bet!