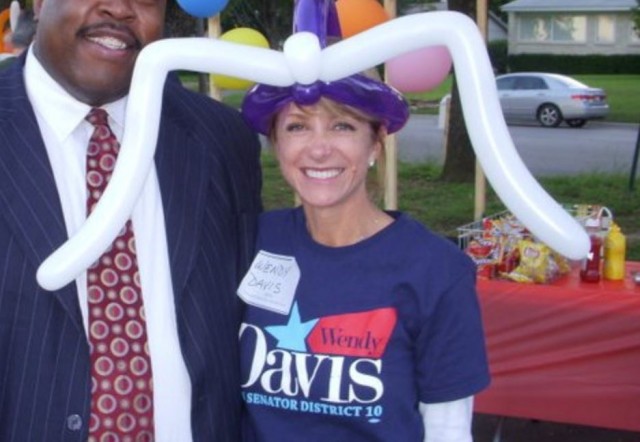 Remember the pink sneakers and progressives promising to stand with Wendy? Remember how sure liberals were that Wendy Davis would turn Texas blue? Remember when people at CNN and MSNBC were falling all over themselves to talk about the exciting candidacy of Wendy Davis?

Those days are gone.

Once a rising star in the Democratic Party, Wendy Davis is now about as popular as a plane seat next to someone from Liberia.

Even Andrea Mitchell of MSNBC was questioning the decision to run the now viral “wheelchair ad” when she interviewed Davis yesterday. If you listen carefully, you’ll notice a strange comment from Mitchell at the 4:30 mark.

Noah Rothman of Hot Air is calling game over:

Mitchell’s claim here that Abbott suffers from a “supposed” disability is getting a lot of attention, as it should, but this comment was really is just one example out of many which indicate just how friendly this venue was for Davis. Abbott’s disability is empirically evident, and no qualifier was necessary. Davis, if she were a smart candidate, could have taken this opportunity – the second, if you’re keeping count – to acknowledge the concerns of those who were genuinely offended by her ad. Instead, she said that everyone she has talked with thought the spot was fair and illuminating. Davis added that the ad has been a benefit to the people of Texas who are “now informed about who he is.”…

Question: “Do you see this as the central issue of your campaign, rather than, for instance, the shutting down of the clinics throughout he state which have made it so difficult for women throughout Texas to go to planned Parenthood and get medically necessary abortions?”

Okay, this might be the softest softball ever lobbed at a candidate in modern political history. Mitchell is practically begging Davis to get back on message. “Remember why you’re here in the first place?” The MSNBC host might as well have asked. “Your unsuccessful filibuster in support of late-term abortions? Why don’t you talk about that a bit and remind us why we supported you in the first place.”

Davis, as bad candidates are wont to do, simply ignored this layup and went on to talk about something entirely unrelated. The state senator decided to take this question about abortion, perfectly teed up by the helpful but discomfited Mitchell, and talk about education policy instead.

You could practically hear Mitchell’s head collapse into her hands in despair as she allowed Davis to drone on for three unbroken minutes.

Maybe next time Democrats will think twice before they rely on a little known senator.

Davis also broke the “Never put your candidate in a hat” rule of campaigning.

That’s the “stupid hat rule”. Some people can ROCK hats…

Hats made from condoms are the exception for Planned Paenthood backed candidates. 🙂

Poor “Mommy Dearest” Davis started out deep in a hole, and all of her own making. She lied about who she was, and it was a very easily disproved set of lies.

Next, she opened her mouth. She is unpleasant to listen to, and her thinking is painful.

Uh-oh… you did it. You wrote ‘mouth’ which reminds everyone of that thing just to the left of hers. I think it’s growing, too. Reportedly, they can now see it from the ISS (not to be confused with ISIS). 😆

From gold digger to political digger, not much of a distance.

No, she can’t stop digging until the hole is 6 feet deep and wide enough to fit her career’s coffin.

Davis also commented that Abbot was trying to “…kick over that ladder”, referring to his ability to get a monetary compensation for HIS injury, but fighting other’s.

I don’t think Abbot will be kicking much of anything. Reminiscent of Biden telling Chuck Graham to stand up.

I about fell out of my chair laughing last night when I heard Mara Liasson say that none of this matters because “Wendy Davis is behind by the curvature of the Earth” and in respect to kicking the ladder “that was a bad metaphor, he can’t kick anything”. Even PBS gets it right occasionally!

While Wendy is standing still on her way to defeat, Greg is rolling on to victory.

Both of these ladies are typical Lefties. They are ALL like reflecting ponds that are so shallow as to be all surface.

Mitchell is so inculcated with PC, that she automatically says “supposed” whenever her brain senses a protected class noun or adjective. PC should be a verified sickness, but if it were, we’d have another 120-130 million Leftists on Social Security Disability.

I wonder who Wendy Davis’s ex husband is voting for?

On any number of levels…

IT’S A SIGN OF SPIRITUAL STRENGTH TO BE WILLING TO MAKE A FOOL OF YOURSELF FOR OTHERS AND SHE’S DOING THAT EVERY GOSH DARN DAY, SO YOU JUST BETTER LEAVE WEN-WEN ALONE, MISTER NO-SOUL CLOWNSELOR.

And as bad as the imagery is, she hasn’t been called out for misrepresenting the cases and issues of law in those cases… she’s already tossed out lines she thinks Abbott should “pick and choose” which laws he defends a la Eric Holder.

That isn’t just a balloon hat, it is a balloon hat with Texas Longhorn horns. Because of that, I think I’ll have to vote for her. Besides, she’s kind of cute and wears pink tennis shoes.

I can see Wendy and Obama doing abortion-at-home infomercials in the Great Progressive Future.

She wears her pink tennies and balloon hat, he his golf cap with a hammer & sickle as they trade jokes and drop babies into a blender, to the raucous applause of their studio audience of feminist ghouls.

What? It could happen!