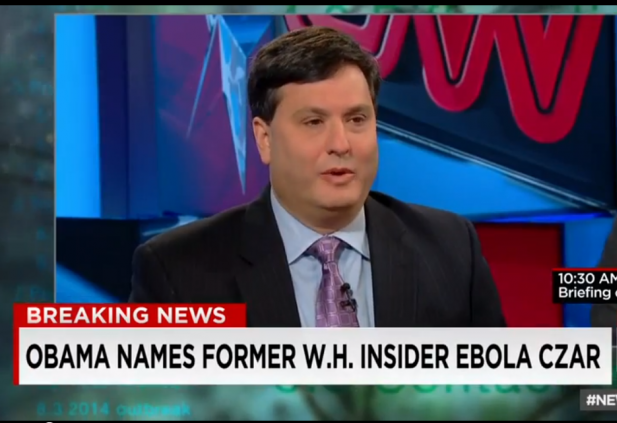 President Obama has asked Ron Klain, who served as chief of staff to both Vice President Biden and former vice president Al Gore, as his Ebola response coordinator, according to a White House official.

“He will report directly to the president’s homeland security adviser, Lisa Monaco, and the president’s national security adviser, Susan Rice, as he ensures that efforts to protect the American people by detecting, isolating and treating Ebola patients in this country are properly integrated but don’t distract from the aggressive commitment to stopping Ebola at the source in West Africa,” a White House official wrote in an e-mail.

Klain, a longtime Democratic operative, served as Biden’s chief of staff from 2009 to 2011 and as Gore’s from 1995 to 1999. He helped oversee the Democratic side in the 2000 presidential election recount as its lead lawyer, a role that Kevin Spacey portrayed in the HBO film “Recount.”

Klain has virtually no experience except for the political and the legal. He’s another Harvard Law graduate, and briefly clerked for SCOTUS Justice Byron White, but after that there’s mostly a long string of Democratic political positions, including a stint as debate prepper.

The following [emphasis mine] is really a masterpiece in gracefully laconic understatement by the WaPo. My hat is off to the article’s authors:

Klain is not known for his health-care expertise, though he would get briefings on those policies in his capacity as a campaign strategist for Gore and the Democrats’ 2004 presidential candidate, John Kerry.

On the other hand, the doctors who’ve been dealing with this so far, such as Frieden, have been so bad at it that perhaps a complete naif would be better. If a person were organized, smart, independent, and objective it could work. But Klain’s status as party operative makes the “independent and objective” part rather unlikely, to say the least.

I vote for Ben Carson.

Ben Carson would be competent and knowledgeable. Those are very dangerous attributes that absolutely disqualify him.

They needed somebody with a blind allegiance to the Supreme Leader.

Don’t forget integrity. That alone would scare the living dog mess out of Barracula.

Yeah, what could possibly go wrong?

Besides having no credential in medicine and disease? Or the endorsement by Obama on Kain is “recognized that the response would benefit from having someone who could devote a hundred percent of their time to this specific task — that is, coordinating the response — and somebody like Mr. Klain, who has a strong management track record both inside government and in the private sector, is the right person for the job.”

What about the fact he is not immediately ready to start in this position and no date has been set?

He’s there to do CYA work for the administration and possibly find some ways to funnel
big money to Democrat cronies. He’ll “coordinate the message” so more lied are told which reflect well on the Administration.

We don’t have a Surgeon General because he wasn’t politically correct on guns. My god, he said guns were dangerous and they kill people.

The Surgeon General would be the logical person to lead. Apparently elections do not have consequences or he would have been confirmed after the hissy fit ended.

Curious which lie-0-tron you got that BS from, liar. Post the link.

There are LAYERS of officials whose job it is to deal in this SPECIFIC area.

Plus, RED state DEEEMOCRAT Senators killed the puke Obama sent up. Why? Because they want to be re-elected. Not because of your lies, liar.

Senators, Republican and Democrat, lie to get reelect. Do you really believe that only Democrats lie? Now that is truly stupid.

It is also an implicit lie, since I said no such thing, stupid.

ANOTHER BIG reason that Obama’s boi was shot down was his support of ObamaDoggle, wasn’t it, liar?

The Surgeon General would be the logical person to lead.

Wrong. The CDC is the logical head of a response to infectious disease. Too bad they’ve done a piss poor job.

People like you give humans a bad name. As Strother Martin would say, “Your head ain’t right…”

First of all, Martin was the bad guy. He was sadistic and when he said that Luke’s mind wasn’t right, he was trying to break him. I think I would rather be Newman (Luke), although I could not have survived as long as he did.

You might as well get the quote right: “You ain’t gonna need no third set, ’cause you gonna get your mind right”

I am puzzled. Is that what you want? Everybody thinks like you or their mind isn’t right? That is ironic from people who don’t like collectivists and group think.

D’Orderant was thumping his chest a bit ago about never, ever, ever using fallacies.

The particular one he’s bringing here from his punk-meisters at the moonbattry is called “the red herring”.

And this one glows in the dark.

I am not perfect. Never claimed to be. But I am very good and I really have studied logic personally and formally.

So far you have done a lot of name calling and little to no analysis.

Well, sure I have, hunny. I analyzed your fallacy, and the lies that it is predicated on.

I knew it for the lie it is immediately, and I bet you STILL haven’t looked under the hood of that dog crap they packed up your butt.

Now, post the link from your moonbat masters. C’mon.

Calling something a lie is neither analysis, nor germane in identifying a fallacy. Identifying the fallacy would establish the lie. Not the other way around. But I am sure that lack of rigor is quite acceptable in your mind. In fact it is your only line of argument unless you are busy committing a fallacy.

Gosh, I guess not everyone who gets nominated will be confirmed. A grown up president would nominate somebody less divisive.

All Obama is looking for is another layer between him and the problem. If (when) things turn even worse than we fear now, he’ll find himself under the bus.

as he ensures that efforts to protect the American people by detecting, isolating and treating Ebola patients in this country are properly integrated but don’t distract from the aggressive commitment to stopping Ebola at the source in West Africa

Lord knows we want to make sure that efforts to protect american’s don’t distract from Africa!

I mean, I agree we absolutley need to stop it there, but this shows you exactly where they priorities are and why this has been such a clusterF.

Judicial Watch released a statement which explains why Obama is sitting on a travel ban and needs a front man to take his heat.

“While the bipartisan voice grows to ban Ebola victims from entering the United States, a new report claims that President Obama is considering a plan to bring the world’s Ebola patients to the United States to be treated.

Judicial Watch, the conservative public watchdog group, says in a shocking report that the president is “actively formulating plans” to admit Ebola-infected non-citizens just to be treated.”

Sounds like the purpose of this is to make the public go around in circles so that it cannot distract Obama from saving Africa.

We ALREADY HAVE an Ebola czar. She works for the NIH and has been tasked with Ebola for years. We have a CDC head. We have a President who already has a chief of staff and a national security team. What does a Democrat political operative bring to this task? How about a President capable of doing his job?

Nicole Lurie was a PC choice who is embroiled in enough scandal of her own that Obama won’t even have her in the meetings with two dozen principals.

I’m suffused with more confidence by the minute…

The preeezzyyy doesn’t have enough self esteem to choose someone actually qualified to do any job in his administration, especially Dr. Carson.

This is like appointing Vernon Jordan, or Jamie Gorelick. The Crony State takes over the handling. Means that “appearances” rather than reality will be king. More of the perfect storm nature of this epidemic.

And here’s another factor, possible, if we go a week or two with all or nearly all false alarm cases, the level of response to the second wave when it appears will be greatly diminished, sluggish. Full of unwillingness to give it attention, like the boy who cried wolf.

Aesop was so incisive. A great man.

I have a very high opinion of Ben Carson, and I think he would be the first to say that this is not his area of expertise. He is a surgeon, not an epidemiologist. We need a doctor who has a great deal of experience dealing with contagious diseases.

THOSE you can hire. A bunch of them are already on the payroll.

What we need, IMNHO, is someone who we believe. Who isn’t telling us transparent BS, and is not contradicting themselves one night to the next.

It isn’t like this is rocket science. America has been protecting itself for a couple of centuries, just by adopting what is basic, fundamental public health science.

Why do we need an ebola czar? That is precisely the CDC’s job. And since the CDC has so thoroughly f**ked it up, why is the answer to add some redundant new federal office replete with fancy titles and full staff? How about we fire the CDC chief moron and get somebody qualified in there?

Klain is a Democrat Party operative, a lawyer, with management experience limited to a single officeholder’s staff at a time – Biden, Gore, et al. CDC and the American hospital system is huge by comparison, in fact, there is no comparison. So then, Klain’S the choice to coordinate widespread and diverse medical assets? That’s bullshit. Klain is there to do what it takes to minimize the political fallout already raining down on Obama, the CDC, and the whole Democrat Party two and a half weeks before midterm elections in which they are already in trouble. He’s there to control the messaging and communications. He’s there to coerce and kneecap journalists tempted to report the facts. But he is NOT there to reorganize our ongoing response to the ebola threat. Oh, that’s happening – they’re no doubt scrambling behind the scenes trying to catch up and figure out wtf to do, but Klain is only a figurehead for all that. His job is political. Period.

Every single agency in the federal government has been politicized, most by design, some out of political self-defense

Here’s the incredibly important question no one seems to be asking (or answering) about Mr Klain: What is the scope of his authority?

Can he forbid people from affected countries flying into the country?

Can he order infected people to be held in involuntary quarantine?

Can he allocate money to hospitals and emergency responders for training and equipment to deal with Ebola?

What, exactly, is his job and does he have any tools whatsoever for doing it??? It matters. The administration needs to answer.

The White House argues they need Klain for ‘administration’ not technical expertise.

His administrative experience includes overseeing the spending of ARRA (the ‘Stimulus’) and supervising federal loans to Solyndra.

Since those turned out so successfully, we should be fine.

I was bored this morning so I whipped up this t-shirt design and I thought you all might enjoy it: