No more “Republicans are people too” videos!

No more “Republicans are people too” videos! 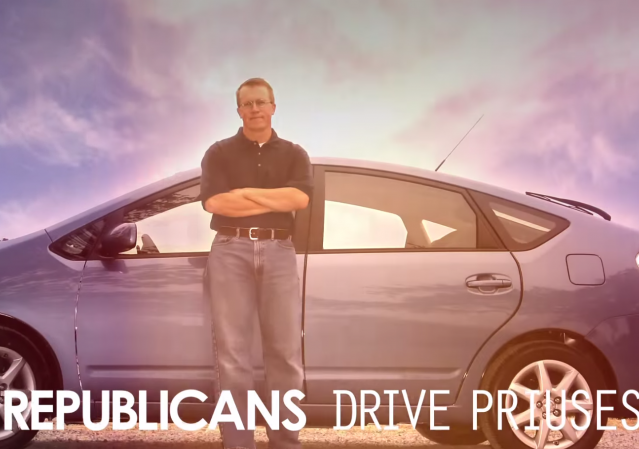 A video published earlier this month now making the rounds on the internet is drawing all kinds of mockery, and deservedly so. On YouTube, the video is summarized as follows:

It seems like it’s okay to say mean things about someone just because they’re Republican. That isn’t right. Before you write another mean post about Republicans, remember Republicans are people, too.

Former Romney ad guy, Vinny Minchillo, is the brains behind the terrible ad. Minchillo told Fox News, “he’s trying to “catch a wave” of interest by launching “Republicans Are People, Too” shortly before the midterm elections – though he’s not advocating for any particular candidates.

I appreciate the idea: debunking the lame, white guy Republican stereotype. In fact, it’s something I wrote about in a 2012 election post-mortem:

My pals in the conservative world are some of the most interesting people I’ve ever met. They’re artistic and creative. They’re film-makers, techies, painters, writers, builders, engineers, attorneys, gamblers, activists, and teachers. Some serve or have served in the military, some work several jobs to make ends meet. Many are brilliant visionaries. They come from all backgrounds, races, nationalities.  Some are cityfolk and others drive loud diesel trucks in the middle of nowhere Texas. They’re from all over the country and many from outside of these great United States. They have varying religious beliefs, practices and ideas.

Some are gay, some straight and some still haven’t figured out what they like.  They listen to punk and indie rock, love obscure cinema and song and some are inked, pierced and mohawked.  Far from the straight-laced, didactic, nerdy stereotype, they know how to have a good time better than anyone else I know.  Their political leanings fall anywhere from radical libertarianism to moderate Republicanism. We argue about our ideological and policy orientated differences as much as we agree, yet we’re all connected by one common thread – hatred of Nickelback. But seriously, regardless of our philosophical differences we’re connected by our commitment to America’s founding principles.

Looking at the GOP, the GOP brand and the how the GOP is publicly perceived, reality doesn’t match perception.  The faces of the conservatives I know aren’t what the public sees as the GOP.  Therein lies the problem.  If we’ve learned our lesson from this election (we’re doomed if we haven’t), then we’ve noticed the American landscape has changed, and that like it or not, so has our party.

My opinion here hasn’t changed. We do have an uphill battle in terms of branding and perception, which I don’t believe to be insurmountable. Then videos like this happen:

So awful is this messaging, that it manages to make Republicans look even lamer. Not only is the messaging cheesy and off point, it’s inaccurate.

To start with, I would never assemble Ikea furniture; that’s what the patriarchy is for. And while I am a slave to Apple technology, shop at Trader Joe’s, listen to Spotify, and love dogs (in particular, my fluffy little sidekick), I don’t enjoy stock photo-laden declarations of just how not-lame and hip we really are.

It reminds of something Margaret Thatcher once said: “Being powerful is like being a lady. If you have to tell people you are, you aren’t.”

Can’t we just be cool instead of running around, straightening our pocket protectors insisting we are? So, Mr. Former Romney Ad Guy, please, I’m begging you, stop. Leave us to listen to Spotify, sip our locally brewed IPA, and discuss the virtues of individual liberty with our other liberty loving, non-lame compadres in peace.

A Romney ad guy did this. And people still wonder why Romney lost the election.

The ol’ incumbent Republicans are so fearful they will lose their place at the Washington D.C. feeding troughs.

So fearful they’ll do anything – including laying down and begging to be….. – to not upset the Democratic Party Members in Congress that they fear will cut them.

Vinny Minchello must be a Dem.

GOP D.C. Dystopia: “Oh, look! If people think we’re just like Democrats, they will vote for us, too!”

Reality: No. They’ll just vote for the Real Democrat. The one with the bag of Free Shit®.

The winning argument is that policies advocated by the Republicans actually work to improve the economic welfare of the country of a whole, and can be used as much more powerful drivers of prosperity than the dustbin-of-history policies of the present Democratic Party.

The fact is, “policies advocated by the Republicans” do NOT “actually work to improve the economic welfare of the country of a whole,” but “can be used as much more powerful drivers of prosperity…” for only a select, select sociopathic few. This is not to say that policies advocated by Democrats do anything different; merely the sociopaths who benefit, are different.

Well, you just have to let that moron flag fly, doncha?

Putting aside the inanity that a “sociopathic policy” could exist, let’s look at history, shall we?

During the later 1800s, America accommodated an enormous influx of immigrants from all over the world, while concurrently providing a rising standard of living for Americans generally.

By today’s standards, the Federal government was miniscule, as were state and even local governments. Were they effective? Yes, quite; at the FEW things they were tasked to do. And Americans, with the ability to do so provided by the capitalist system them, took care of each other via organizations THEY started for that express purpose. THEY saw a need, and they moved to fill it.

Move forward to the 1920s, during the era of Coolidge, the most Conservative president of the era. The ’20s ROARED, and that term applies expressly to the improvement in the standard of living across the board in America. The general population got radios, telephones, cars, and electricity. There was a serious economic downturn that came and went quickly, because the government did mostly NOTHING. And the middle-class was so well-off, they had money to invest in the stock market as a matter of course.

There is nothing “sociopathic” about Conservative policy. Well, unless you hold the fever-dream bullshit notions of “conservative policy” foisted off by the moonbattery, which apparently is ALL you have…that the goal is to return black Americans to their chains (we broke them off), that we wage a “war on women” (the converse is true, and has been), etc., and some more excreta.

The video might make Republicans look lame, but keep in mind the fundamental principle of politics: 99% is just showing up.

The problem is there’s an endless drumbeat about how awful Republicans are, and for most people hearing it there is *no* answer.

Any answer that shows that we’re out there and are real people and not the Democrats’ stereotype of us breaks through that. If you’ve got ideas, by all means get them out there no matter what your misgivings, because the reality is that we’re desperate for conservative voices to be heard.

Where’d I put my scotch?

If you have to tell them, it means you doubt that it shows. This is what I’d expect ISIS to do – run a video that says “we’re just plain old country boys and we’re misunderstood.”

Vote Republican: There Is An Outside Chance That A Rumor Is Going Around That Someone Heard Someone Else Say The GOP Might Possibly Not Be As Bad As The Media Says. Maybe. Of Course, If Democrats Are Offended We Retract It Immediately (It’s The Tea Party’s Fault!).

Yep – that’s the ticket all right. Dunno why people aren’t flocking to the GOP’s banner by the millions after seeing Minchillo’s ads.

The NRA use to have a series of “I’m the NRA” ads. Since the NRA is the only conservative organization that has been consistently successful against the left, perhaps the Republicans should consider using the NRA’s tactics.

I’m not getting all the hate. It’s not a great video, but it isn’t as bad as all that, lol.