The answer is not to cry sexism over her resignation, but to fire more of the equally incompetent men. 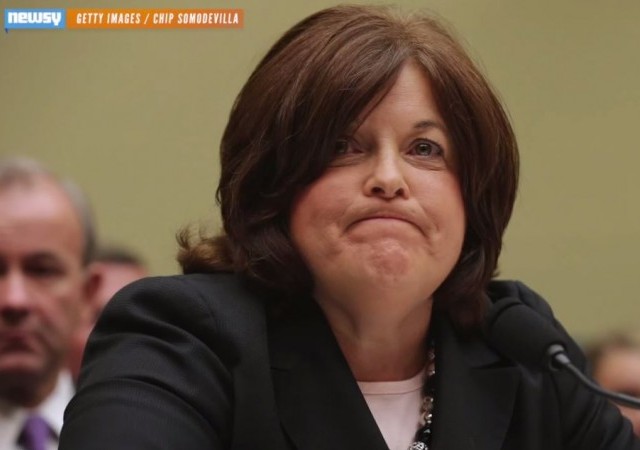 Just-resigned Secret Service Director Julia Pierson allegedly is the victim of male privilege, and was treated differently than a man in a similar position would be treated.

This video clip — just before the resignation — led to charges of sexism:

Those charges increased after the resignation.

At The New Republic, Secret Service Director Julia Pierson Was a Victim of the “Glass Cliff”:

On Wednesday, Julia Pierson, the first woman to ever lead the Secret Service in its nearly 150-year history, resigned her post amid heavy criticism over an intruder who was able to get as far as the East Room of the White House.

Reasonable people can disagree about whether, ultimately, she deserved to lose her job or whether anyone in charge during such an incident would have to resign. But it’s probably not pure chance that Pierson, who held that position for just a year-and-a-half, was a woman. Time and again, women are put in charge only when there’s a mess, and if they can’t engineer a quick cleanup, they’re shoved out the door. The academics Michelle Ryan and Alex Haslam even coined a term for this phenomenon: They call it getting pushed over the glass cliff.

On Twitter, the claim was made that Pierson was just the fall gal for male failure reflecting male privilege:

Pierson didn’t do her job. Her agency concealed key information from the public, including how far the perp penetrated into the White House, as we detailed in The flawed and Secretive Service.

She had to go.

The answer is not to cry sexism over her resignation, but to fire more of the equally incompetent men.

“How wonderful it must be to go through life believing all your accomplishments are based on merit and not on having a penis.”
–Charles Clymer

I note with interest that is posed as a “thought question”.

Which kinda begs the question as to Clymer’s “penis status”.

Or maybe there is no question, really…

I think the polite term to say is “Muslim minaret.”

Clymer is a single story structure.

Yeah no chance you’d go through live believing any of your accomplishments were based on social engineering rearrangements such as affirmative action. It’s all about the innies vs the outies.

The agents are going to love the Comcast culture coming their way.

If you embarrass the president, you’re going to take the fall. Being female doesn’t shield you from the responsibility of being the boss. The deck was stacked against her as it would have been for any male who was given the job. Had she cleaned house as was obvious needed doing, she might not now be falling on her sword.

When everyone (Italians, Irish, Indians, short people, bald people, fat people) quits asking to be made equal. Then they really will be equal!

Strange things happen when you conceive of the idea that the Secret Service should be more open and inviting like Disneyworld, your former job. Easily overpowered female agents at the door to go along with the muted alarm bells, too disconcerting to the first family and their entourage.

Not A Member of Any Organized Political in reply to Bitterlyclinging. | October 2, 2014 at 2:48 pm

But Obama and the first family are always golfing and on vacation – they’re never home – in the White House.

Yeah, she is a victim of Barack Obama’s male privilege!

Actually, she’s a victim of Gonzalez’ male privilege to jump the fence.

Mr. Clymer needs to put on his big girl panties and quit his whining….

How many years did this “lady” have as an agent? Her previous job was running the HR department. Furthermore, she bragged that the White House intruder wasn’t shot. That is proof that she was unfit to lead the SS. She should have been angry that he wasn’t shot.

Not qualified and only chosen to lead the SS because she is a women.

Is there any way she was one of the 10 most qualified people for that job, if the hiring had been gender-blind?

I find the tweets odd. “being used to cover up the failures of men”. Last I checked, being the boss means if your subordinates fail, you are at fault. It’s part of the responsibility of being the boss.

She failed in her primary mission as no doubt assigned by the WH which named her – she failed to protect them politically by not reporting the Atlanta incident to WH staff so they could bury or spin it. Actual/literal job performance considerations? Pffft, please. She fucked up politically, was handed a sword and told, “have a nice fall.”

Huh????? Pierson originally was an affirmative action hire from her cop job in Orlando (itself ditto). The Secret Service was looking for women.

Why are you posting pictures of Chris Christie x-dressing with these Secret Service stories?

The narrative was inevitable. Any time a woman has a problem it isn’t “her” fault it’s all those nasty men who expect her to just do her damn job and quit whining about being a female in a male world.

This nitwit wanted to run the Secret Service in a “friendlier” way, just like security at Disney World. A victim? Yeah, a victim of her own incompetence.

Many years ago when I did agree with “some” issues the feminists were spouting I thought to see strong and responsible women doing anything they were capable of doing.

What we got was a bunch of whiners that don’t/won’t take responsibility for anything. Victims? Balderdash!