MoveOn: If Republicans take Senate, they might do to us what we did to them

MoveOn: If Republicans take Senate, they might do to us what we did to them

Where have we seen “reconciliation” used to pass laws before? 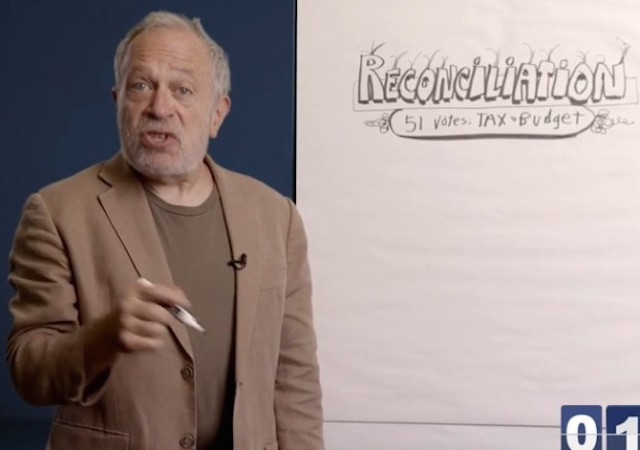 The leftist outfit known as MoveOn.org has created a new ad for the 2014 election.

The video warns that if Republicans win the senate this fall, they might use an underhanded procedure known as ‘reconciliation’ to pass legislation. Legal Insurrection readers will no doubt recall that reconciliation was the very process Democrats used to pass Obamacare.

I think this video is really a tribute to two different groups. The first is the low information voters Democrats rely on who will eat this up with a spoon having no idea how hypocritical it is. The second is the progressive activist class, every single one of whom knows exactly how dishonest this is.

Hat tip to Allahpundit of Hot Air who adds:

They used reconciliation to pass what’s arguably the most momentous piece of domestic policy of the past 50 years, and now, the instant Republicans use it for anything, the tactic will be deemed de facto cheating — despite endless leftist screeching since 2009 that we should probably go ahead and jettison the archaic 60-vote threshold for cloture entirely.

It’s worth noting that comments for this video on YouTube are closed. I wonder why?

It was worse than reconcilliation: The Senate took a bill that the HOuse had passed, a bill that had NOTHING TO DO WITH HEALTHCARE, and erased the contents, then used that bill # and the fact that the bill had with that # had passed the House, inserted the language of Obamacare and passed it. THEN the House used reconcilliation to pass it again. It was a TOTAL FRAUD and we should nto forget it.

As I recall, only a series of amendments to the original Obamacare law were passed via reconciliation. The original Senate bill had to be passed by the House without any changes because, after the Senate passed it, Scott Brown was elected, replacing the deceased Edward Kennedy. Thus, the normal procedure – differing bills being reconciled in conference and then a revised bill being passed by both houses – could not be used because the Dems no longer had a filibuster-proof majority in the Senate.

It would be fun…if one had the time…to fisk that lie-fest for individual falsehoods.

Just one would be “oil company subsidies”, when the reality is that oil companies don’t get any “subsidies” that I know of, while ethanol would not exist as a fuel without them.

What oil companies DO get under the tax code is a depletion allowance as a deduction, which is no different than timber or other extractive activities get. But “oil companies” is a woo-ba, woo-ba scarey term for the Collectivists to use.

Don’t forget the roughly $40K of tax dollars that go to subsidize each Tesla, which is only driven by those nasty 1%-ers, and the roughly $20K that subsidizes each Volt and that new electric Caddy bought by green-fiends.

Note too, that this is Robert Reich who went from Wall Street to Clinton’s Cabinet and back to Wall Street. When he says sh!t like “loop-holes for wall street” and “tax cuts for millionaires” he really, really needs to at least wink at the camera.

Oh, and how they can say the words, “Affordable Care” when referring to 0bamaCare and not even chock is beyond me. Not.

What pieces of “recycled” garbage these people are.

Depletion is just depreciation by another name, so only the ignorant or the mendacious call to get rid of it.

Nobody so far as I know is agitating to get rid of depreciation, other than people wanting to replace depreciation with full expensing.

Not exactly. Both attempt to spread the cost of an asset over its useful life, but depreciation is based on cost and useful life is usually fairly predictable. Depletion is a percentage of income that is assumed to represent the consumption of the asset. But we have no idea whether the percentage is accurate of not because we don’t know how much oil will come out of a particular investment and the percentage allowance is not applied to the cost.

The whole thing is so uncertain that, if it were up to me, I would allow (for tax purposes only) the full cost of all assets that now must be depreciated to be written off in the year in which the expenditure is made. Investments in mineral production, including oil, would be treated the same way. Of course, if I had the power to do that, I would also have the power to abolish the corporate income tax altogether, which is what I really think should be done.

A nice lil’ remembrance of the Reicheeeeeeecha positionsssss on “reconciliation”.

Which in number challenge the Kama Sutra…

There is no reason, one cannot take the youtube video, repost it to youtube with the same tilte,and append “the truth” to it. Then write your own intro and allow comments.

an army of prog drones would file DMCA take down requests within seconds, and rest assured Goggle would gladly comply

Its the same bullshit they spew out regarding fillibusters.

Democrat faithful bitch and whine about Republican’s ‘unprecedented’ use of the fillibuster, totally ignoring the fact that THEY were the ones that started using it as a partisan weapon under Bush, and were warned by Republicans to stop because someday the party roles would be switched.

Want to see a Democrat’s head explode? Bring up the idea that Republicans would only need 51 votes to confirm federal appointments and listen to them spew about how horrible and partisan and borderline illegal it was, then remind them that Reid already did it and watch them try and change their positions on the spot.

Yes, please. Can we set a time and date certain? How many…???

Perhaps one of us should see if we can get Bill O’Reilly to do a “man on the street” segment asking Democrats about it.

That could be fun.

Who do I call? This video is heinous torture.

I predicted at the time that this would happen, I was fully expecting it, and it *still* makes me ill to see them pull this sort of crap.

So then, if the GOP wins the Senate to go along with their House majority, I ask the question: should they refuse to employ all the tricks the Dems used, including reconciliation, or should they take the high road and refrain?

If the GOP repeats Dem legislative games like reconsciliation it will make it the new norm and both parties will do it from here on.

The ‘pubs will claim they’re taking the high road, but that’s just a cover for their mediaphobia-driven cowardice.

No. The GOP should NOT refrain. They need to use each and every weapon in the arsenal. They refrained in 2005, and what did it get us? OBAMACARE. What else did it get us? Appointments of ULTRA-PROGRESSIVE Judges to the DC Circuit Court of Appeals (the step below the SCOTUS).

I expect to see a “power play” in the lame-duck session, where the Senate attempts to confirm all 31 open judicial positions on the appellate Courts. Lifetime positions for Liberal Judges who can be making policy for the next 20-30 YEARS.

I’m with you, Mr. S. I’d prefer to keep to the high ground, but ours is an opponent who will not allow it, who force us to fight fire with fire. I support using every trick in the book to defeat liberalism. I’d also support reestablishing the political high ground once firmly in control. The latter won’t happen, of course, but I’d support it.

I’m gonna swim against the current here a bit.

I think the filibuster…or some variant…is a good thing in the Senate.

IF…IFFFFFF…the filibuster or some variant is made a DURABLE feature of Senate procedure, as through a law or even an amendment, I would support that.

who is that guy, what a hateful excuse for an honest man he is.

I think I will go to MoveOn.org and sign up to make calls sabotaging this effort at low info hood winking.

Standing at an easel borrowed from a kindergarten.

Or with the legs cut off…

The ‘rats should have no worries about this. The spineless, gutless, whimpering ‘pubs are too afraid of the slimestream media bias and their own shadows to do any of this.

Only slightly related, but I’ll never get over Trent Lott’s “power-sharing” idiocy.

When the Republicans take the Senate next month, McConnell will restore the filibuster to it’s original, upright position, as it is an effective weapon against the president. Then, in 2016, if we somehow retain control of the Senate and win the presidency, then he’ll want to roll it back to 51 on judicial appointments until the next president gets a bellyful of conservative stalwarts on the bench, and the rats get a belly full of nasty-tasking quid pro quo.

Nasty-tasting? A mind is a terrible thing.

“When the Republicans take the Senate next month, McConnell will restore the filibuster to it’s original, upright position, as it is an effective weapon against the president. ”

“Then, in 2016, if we somehow retain control of the Senate and win the presidency, then he’ll want to roll it back to 51 on judicial appointments ”

He will not want to, and he won’t.

McConnell will institute the filibuster to help Senate Democrats stop the Senate from passing meaningful conservative legislation, and to keep himself and his spineless friends from having to vote on anything requiring them to take a stand.

Would that be the same Robert B Reich who as Secretary of Labor demanded a tire plant comply instantly with requirements resulting from an OSHA audit or suffer extreme fines and penalties….without the plant’s owner having had the opportunity to contest the findings, administratively or in court?

And would that Robert B Reich and his crew be the same ones that a federal district court enjoined from applying any fines or penalties to the tire plant until regular administrative procedures had been followed, and, further, chastised Robert B Reich et al. for acting far outside any regulatory or statutory authority?

Who is he to whine about anything anyone else does?

I thought “nonpareils” were those little candies Grandma had in the crystal bowl on her coffee table.

In the crystal bowl on the coffee table? That would be Grandma’s dentures.

Liberals suffer from a mental disorder I call libnesia. They invent an underhanded political tactic and if it looks like the Republicans are going to use it, they warn the Republicans that if they do that they will cause the Democrats to sink to their level. During the last two years of Bush’s presidency, the Senate never went into recess so that Bush couldn’t have any recess appointments. The Republicans did that to Obama and he ignored them, but SCOTUS said it wasn’t for the president to decide when the Senate was in recess and invalidated his recess appointments.

For the progressive movement, language isn’t for communication, it’s just another tool, another weapon, one vector for propaganda. Truth is spoken only if politically advantageous to speak it.