Jaylen Fryberg was popular and outgoing. 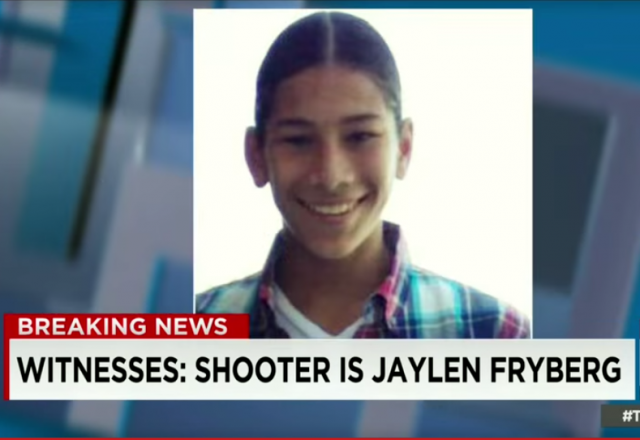 There has been a fatal school shooting in Marysville, Washington. Here are some of the details:

What [a student in the school cafeteria] saw was freshman Jaylen Fryberg go up to a table with students, “came up from behind … and fired about six bullets into the backs of them,” Luton told CNN. “They were his friends, so it wasn’t just random.”…

Three are “very critically ill” with “very serious” injuries, she said. One is in serious condition. One of the boys, age 14, suffered a jaw injury. The other, age 15, was critically injured in the head.

The shooter and his victims are members of the Tulalip Native American tribe, and the two boys mentioned in the above quote are relatives of his:

My grandson and the shooter were best friends,” said the boy’s grandfather, Donald Hatch. “They grew up together and did everything together.”

The girls are not identified, but they were shot in the head and are in critical condition (another girl has died).

This is very different from the typical school shooting.

Ordinarily the shooter is some sort of misfit—not always a bullying victim as sometimes thought, but often at least somewhat troubled in a way that was noticeable even prior to the shooting.

Fryberg was apparently the opposite—a very popular and seemingly happy young man, although he’d had a few disappointments lately, including a breakup. He was also quite different from the usual school killer in that he targeted a group of friends. I haven’t done exhaustive research on the choice of victims of school shooters, but it’s my impression that this is highly irregular and perhaps even singular.

There is always the possibility that Fryberg was a sociopath or psychopath, although it’s way too early to know. But they often seem likeable, hide their antisocial natures quite well, and would have so little conscience that blowing away a bunch of friends might seem a good idea to them. They also are very difficult to spot, and if that was the situation here the mental health field would have been of very little use.

As for the gun, this is the preliminary report:

The gun used in the shooting has been traced to Fryberg’s father, a law enforcement source with knowledge of the investigation told CNN. It is a “high capacity” weapon but did not have an extended magazine, the source said on condition of anonymity.

It is highly likely that this will be used in an effort to extend gun control in some way.

[NOTE: Eric Harris and Dylan Klebold, the perpetrators in the Columbine massacre, were initially thought to be of the bullied misfit type. But later research has indicated this was an error or at least an exaggeration, and that they were relatively well-liked. However, they had gotten into trouble with the law, although they fooled even the legal system into thinking they’d learned their lesson and were pretty good kids. Who were their targets? Actually, everyone at the school, and their intent didn’t stop there. They were extraordinarily antisocial, nihilistic, and grandiose in their plans, most of which they had kept completely hidden. It was only their journals, read posthumously, that revealed the extent of their pathology and/or evil.]

Considering the circumstances I do wonder if there prescriptive anti-depressants / stimulants / mood stabilizers involved.

It might be instructive if this guy, the Aurora, VA Tech and Sandy Hook perps had the same or similar prescriptions.

hormone rage? One of his close buds takes away his girl (or his girl leaves him for..)? I know nothing but it’s an old, old story…

That was my first thought too after reading his tweets

According to NPR, two girls are in critical condition.

Two other people were shot. But, really, who cares about them…

Sociopaths and psychopaths do not put themselves directly in a situation where they are at risk, according to my understanding and experience. They will stealth up on you, physically or metaphorically (a lot of them are never physically dangerous), but they do not take anyone on on anything like a fair basis where they are prone to be endangered.

Sounds like it was about losing the girl … which some young boys don’t handle well. That may have set off all the other arguments, especially since the girl left him, for(?) his cousin. So he couldn’t go back to his old table at school for comfort, and became more isolated.

He was apparently arguing with his parents as well, and it would seem his father should have considered locking up the guns. There is probably some liability there?

Psychopath or sociopath? Seems he acted out against others after losing the girl, and didn’t turn toward anyone for real help.

Where the decision to kill comes from … hard to say. Maybe they should blame twitter, rather than the gun. He tweeted and tweeted from his isolated state, when he should have talked it through face to face, with one of his other friends. Tweeting and texting limits might do more good than gun magazine restrictions.

It is highly likely that this will be used in an effort to extend gun control in some way.

It has already begun.

There are two competing gun control initiatives on the Washington Ballot, I-591 would prohibit the state from adopting any background check regime other than the federal standard, while I-594 would require a background check for most firearm ‘transfers’.

There are narrow exceptions where a background check would not be required under I-594, such as while hunting , while at a range where the firearms are stored, to a spouse or children under the age of 18.

Under I-594 it would be illegal (without a background check) to loan a firearm that you own to a friend while at the range for them to try out.

Another crime would be committed when your friend hands the firearm back to you once they are done… assuming you didn’t run another background check.

If a neighbor came to you asking for advice on what kind of firearm to buy for home defense and how to handle such an item, it would be illegal for you to hand them an unloaded one and teach them safe handling… provided you did not first run a background check on them.

The list of ways that otherwise law abiding citizens would become criminals under I-594 is endless… and despite that there is major money from out of state pushing for it and it was likely to pass, the tragic events in Marysville have all but guaranteed it’s passage.

While we are used to bad laws being pushed as imagined fixes for problems, I-594 would not have actually stopped yesterday’s shooting. If it is true that it was the father’s gun that was used (or just one he purchased), I-594 would have done nothing as under I-594 the father would be able to transfer the handgun to his under 18 son without a background check… not that we have heard of any criminal or mental background that would have shown up.

The kid was in violation of multiple criminal statues, starting with premeditated murder.

C’mon. No need to split hairs here. No Washington 14-15 yo can bring a loaded firearm outside his or her home without a parental unit walking beside them.

It’s also highly likely to “rock the vote” on the anti I-594 (pro-gun) side as well since there are those already dancing in the blood and making a spectacle out of it.

My wife is state co-ordinator for Tea Party Patriots, who are currently working with Freedom Works and NRA to defeat this stupid initiative (I-594). As such, I have access to internal info. Such as polling that is in line with other gun control initiatives of the past – about 2-1 against control.

This is not a party line issue here in Washington. GOP and Dems and libertarians all like their guns, and they like hunting. It is an urban versus rural issue. And rural starts about five miles beyond the city limits of every big city.

Marysville is a town/city with a large Indian population. As you can see from the Facebook pics of this kid, he had guns and he was a good hunter. Nobody is going to dare dance on his grave waving I-594 literature. The Indians would flip out (justifiably so) and the liberals would watch from the sidelines so they wouldn’t offend any of the interest groups.

I say let the idiots try to make this an issue for gun control. That could be the final nail in the coffin of stupid gun grabbing here is Washington. Keep in mind that each one of the initiatives on the state ballot costs millions of dollars to handle yet only $5.00 to file. I’m all in favor of charging the cost to the loser if they don’t pull at least 40% of the vote.

The breakup with the girl can act as a spark, a precipitating factor. But the vast majority of people won’t react by blowing away five other people (and then themselves) in a school cafeteria (or elsewhere), whatever the provocation, depression, or betrayal. Some additional (unknown) factor made him a killer.

>> … Some additional (unknown) factor made him a killer.

Not so unknown really, it’s that he’s different from the vast majority of people. (A little black humor.)

There is a photo of him where he has this weird “Obama” choom bum look going on.

What happened? He was so beautiful, and looked so happy, his parents must be devastated. May he rest in peace.

May the ones he killed rest in peace. Yes, of course, and may the wounded quickly heal – body and soul.

But there is still something baffling about this young man.

Millions of people are on medication. Stop blaming the pills.

It’s irrational to blame the break-up too.

Generally, mass shooters are not mentally ill in any objective way aside from the fact they committed mass murder.

Harris/Klebold were unique in almost every aspect of what they did, and it looks like this one is unique as well.

This youngster may have recently been on meds due to the fight he had in school just a few weeks ago.