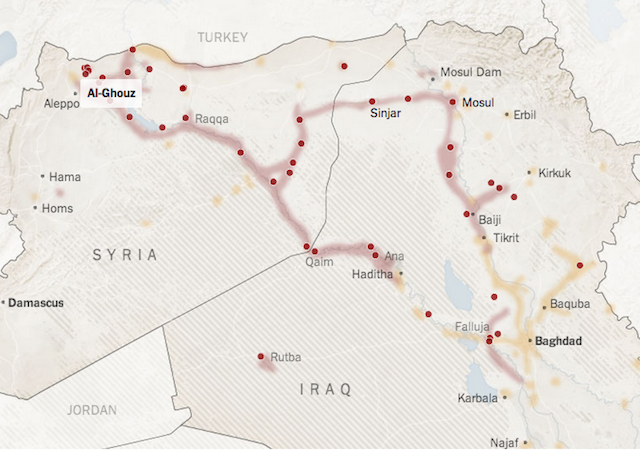 I was in high school when U.S. troops laid siege to Baghdad. My boyfriend at the time helped secure and eventually occupy several of the palaces, and his phone calls from the first warzone either of us had ever known helped me gain a deeper understanding into what it means to send our troops in to “take” a city.

So you’ll understand when I say that I find the recent developments in northern Iraq and Baghdad a little difficult to swallow.

Today’s report from Bloomberg details how ISIS militants are using their own unique tactics to push back against U.S. airstrikes in northern Iraq:

Islamic State claimed responsibility for a triple suicide bombing in northern Iraq that killed at least 58 people as militants defied U.S.-led airstrikes to stage attacks across Iraq and Syria.

The group said on a jihadist website that three foreign fighters carried out the attacks yesterday in Qara Tappah in the ethnically mixed province of Diyala, 75 miles north of Baghdad.

A roadside bomb also killed the police chief of the western Iraqi city of Ramadi, where security forces are struggling to repel militant attacks.

Islamic State has so far resisted efforts by the Iraqi military to wrest back control of Sunni areas of the country, while continuing its own offensive in Iraq and neighboring Syria. President Barack Obama’s senior military adviser warned that militants were blending with Sunni populations in communities near Baghdad, increasing the likelihood of attacks on the Iraqi capital.

“I have no doubt there will be days when they use indirect fire into Baghdad,” the adviser, Joint Chiefs Chairman General Martin Dempsey, said in an interview yesterday with “This Week” on ABC. Indirect fire can refer to use of mortars or artillery fire.

According to Bloomberg, ISIS has already carried out attacks on Baghdad, and as General Dempsey has said, the military expects more of the same. In addition to mortar attacks, they’re also using suicide bombings to create an atmosphere of chaos and fear, which is their hallmark.

Coalition forces are busy training Kurdish soldiers, in addition to carrying out airstrikes against ISIS strongholds; but that hasn’t stopped ISIS from threatening to destroy cities like Ramadi and Kobani:

International efforts against Islamic State have intensified as militants threaten to capture Ramadi in Iraq and the northern Syrian town of Kobani. Kurdish forces, backed by Yezidi fighters and tribal militants, on Oct. 11 started an offensive to retake the town of Sinjar in Iraq’s north, the al-Mada news agency reported, citing security officials.

The situation in the borderlands has devolved from “humanitarian crisis” to “impending genocide.” The world is watching, knowing that the sophomoric foreign policy decisions made by Barack Obama have contributed to both the current crisis, and future problems in the region:

The US and Turkey have engaged in an at-times brutally public spat over the US-led coalition’s strategy to “degrade and destroy” the group calling itself the Islamic State. And it might only get worse from here, threatening a key flank in the coalition unless the US agrees to take on an even more expansive role in Syria’s civil war.

At the heart of the disagreement is Turkey’s desire for the US to commit to the ouster of Syrian President Bashar al-Assad, something the US has been reluctant to commit to during Syria’s three-plus-year civil war.

But Turkey’s government believes the cycle will repeat itself even if ISIS is defeated: Assad will foster the rise of extremist groups, protecting his own stranglehold on power while the groups present a fundamental threat to the West and their allies.

ISIS is conducting suicide bombings, is on Kobani’s doorstep, is threatening genocide in Kurdish territories, and we’re still unwilling to even pretend to walk back commitments we made to the troubled Assad regime.

At this point, it’s becoming clearer and clearer that Obama believes he has nothing to lose. He’s going to continue to rely on both the ignorance of the American people and the helpful media to maintain a facade of competency that covers up destruction, death, and the loss of all ground we worked so hard to gain during our initial surge into Iraq.

Featured Image via the New York Times, which has aggregated some great coverage and visual aids detailing the spread of ISIS in the Middle East.

We pretend to fight a war. This is disgraceful.

The level of air strikes is less than 1/10th what Clinton sent into Kosovo. We had 10,000 sorties in 78 days in the Balkans, only just made 400 over the first several weeks of this one.

Obama has no intention of defeating ISIS or keeping Iran from developing nuclear weapons, only in postponing the disasters until he is safely out of office.

“At this point, it’s becoming clearer and clearer that Obama believes he has nothing to lose. He’s going to continue to rely on both the ignorance of the American people and the helpful media to maintain a facade of competency that covers up…”

Doesn’t that describe Obama on just about every issue/scandal that he’s on the losing side of?

ISIS is going to go nuts for the next two years, then dig in after that. Obama will have much to answer for at the end of his terms, and I think most Americans are beginning to see this. Even some Americans in the MSM belive it or not.

We have to wait and see what Turkey does too. I’m not hopeful for anything positive coming out of Turkey, however.