Is this ad race-baiting?

Is this ad race-baiting? 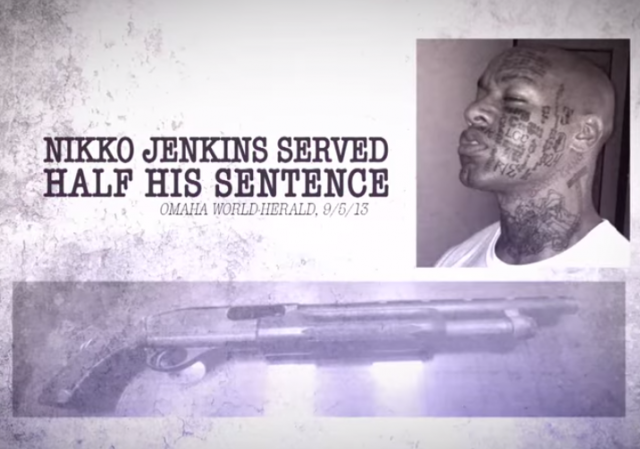 Salon.com said This may be the worst race-baiting campaign ad since Willie Horton.

Greg Sargent at WaPo announced Willie Horton is back!.

The freaking out was over an NRCC-sponsored ad linking Rep. Lee Terry’s (R-Neb.) Democratic opponent to convicted murderer Nikko Jenkins, who also happens to be African American.

The ad attacks state Sen. Brad Ashford over his support for the state’s “good time” laws, and blames those laws for Jenkins’ early release. It doesn’t mention Jenkins’ race.

Via The Hill:, Michael Steele joined the fray at MSNBC:

“You say to yourself, what is the point of this ad? I mean, in the context of the case or the situation, yeah, okay, the member of the house supported the law. But then to put it in this frame, says something very racist in my view…Stupid does stupid,” Steele said Saturday on MSNBC’s “Up With Steve Kornacki.

“This ad doesn’t tell you anything other than consultants are stupid and that’s basically – they play to the lowest common denominator and that’s part of the problem,” he added.

Is the Nikko Jenkins ad racist?

Is it worse than the NAACP television ad about the murder of James Byrd by white men which suggested George W. Bush was indirectly responsible?

Are they all equally bad, but not necessarily racist?

I’m glad you brought up the NAACP Byrd ad. To my mind, that undermines any attempt the Democrats have to paint the GOP as racist.

Like the Willie Horton ad(which only ran once), the controversy over the ad will get it’s message of the Dem being soft on crime to people that would never have paid attention to the ad.
http://murderpedia.org/male.J/j/jenkins-nikko.htm
“Prosecutors say Nikko Jenkins, 27, shot Juan Uribe-Pena, Jorge Cajiga-Ruiz, Curtis Bradford and Andrea Kruger in three separate Omaha ambushes over 10 days last summer
The rampage came after his July 30 release from prison without supervision”
Also like Willie, Nikko killed when he should have been in prison.

Does the REAL message…as opposed to the IMAGINARY BS message…change?

No. We don’t want people…of ANY race…who have elected to be monsters released on the streets.

And we DO see what happens to people…of ALLLLLLLL races…when they are.

The monsters kill them.

Make him white with the appropriate tatts and they’d say you’re bigoted against alternative lifestyles!

Race is irrelevant here; the point is too many criminals of all races are being released early due to overcrowded jails, budget constraints, or administrative policy. I am particularly incensed that hordes of illegal alien murderers in jail are simply being released because that is 0B0LA administration policy.

PS – all ‘white’ murderers currently incarcerated should sue for early release based on discrimination.

“Is it worse than the NAACP television ad about the murder of James Byrd by white men which suggested George W. Bush was indirectly responsible?”

In East Texas. Where he was murdered.

The facts of the case stand on their own, regardless of the race of the perpetrator.

Neither of the two ads by the Republicans were racist; they raised facts and exposed a leftist agenda and horrifying results from those ideologies and naive beliefs being lived out.

However, it is all they have. Because the two ads tell the truth.

(The one targeting Bush is ALSO what they do, all they have – Alinsky 101. Because they couldn’t attack him and his character any other way.)

Who are the people who see one mean-looking heavily tattooed black guy who murdered someone and automatically associate all black people with that guy?

Answer: the people who call the ad racist are the ones making that association.

The rest of us, on the other hand, don’t assume that the category of “black murderer” is a stand-in for “black people.”

It’s amusing that Dems and Steele are acting like vile killers such as Jenkins and Horton are typical of Black Americans.

But I do find your jumping in to this conversation to suddenly quote racial crime statistics interesting.

Perhaps you disagree with Radegunda’s idea that “The rest of us, on the other hand, don’t assume that the category of ‘black murderer’ is a stand-in for “black people.'”?

I’m afriad I don’t see the racism in the ad. Nada.

But then when has racism needed to be present for Dems and MSNBC to shriek racism?

Perhaps you do not see racism in the ad because you do not see the color of a person’s skin as the primary characteristic about that person. I do not see the racism in the ad either but I can see why a racist would see the ad as racist.
The focus here is on a law, its impact, and its supporters. The focus of the NAACP ad was on race and implied that the law did not matter and was being ignored, contrary to the facts.

I have to chuckle a little when you wrote: “because you do not see the color of a person’s skin as the primary characteristic about that person.”

I was called racist in an undergrad Lit. class for saying basically the same thing– that I don’t believe the primary characteristic defining a person is race. Apparently it’s racist to not judge a person by their race.

Is it racist to show a photo of our Black president when we criticize his lies about the ACA, Benghazi, the IRS scandal, etc?

Of course it is. You didn’t know that?

I see both ads as calling a spade a spade. The Dems don’t see racism either, they just know that using that label will intimidate.

The Democrats invented modern racism. When Jim Crow and the Black Codes died at the hands of the Republican-sponsored and Republican-back Civil Rights Amendment and Voting Rights Act, they just switched gears and created the “Great Society”.

If you can’t intimidate ’em, ruin ’em. Make ’em dependent on just enough largesse to ensure they are compliant, docile and obligated.

THAT is why Democrats see everything in terms of race.

I see anyone (black, white, latino) tattooed up like that, and I see thug, scary and likely criminal. It’s normal human behavior to react to individuals who look like they’re the antithesis of a good upstanding member of society.

The fact that any of these kinds of folks are being released early from prison…well, that’s the Democrat policies for you, soft on crime. They don’t mind unleashing them on the regular folks who don’t live in gated communities with bodyguards.

In Calip0rnia, the Gold Standard for Progressive policies, letting convicted murderers out of prison early would get a response of a stifled yawn.

What’s racist is ignoring all those white guys who do the same thing. Right? Right?
As with Horton, the dems need to show us white guys doing the same thing so we can justifiably think it was racism that caused the ads to pick Horton and Jenkins.

Good to see you back, brotha! Hope everything is going well!

That the Liberals call this ad ‘racist’ tells me that that’s the first place their heads go when they see a black person. Talk about being a racist – they surely are!

They see and evaluate everything in terms of race; which is a pretty good definition of a racist. The Left / Liberal / Progressives need to be repeatedly asked “why do you always see everything first in term of race?”

If the shoe fits… regardless of its color or style.

The truth has no agenda.

There’s someone here who just doesn’t like any of the comments.

You’re right, but I guess they’re entitled to their opinion. I will reconsider one of my remarks above, and that is one can’t/shouldn’t judge a book by its cover (thought IT IS human nature to do so). There are people who are into tattoos, maybe bikers (stereotypical, I know), etc. who are good folk. Like the ones who have gone from Holland and Germany to help the Kurds fight ISIS.

In this guy’s case, the tattoos covering his face and neck, gang related? That’s still the red flag for average folks, not the color of his skin.

‘Soft on crime’ is an ages-old political attack, and to example it you have to profile a criminal who will be either white, black, red, yellow, or from the blue man group. No matter which one you go with racists from that group or who support that group will object. The objections are mostly cynical – politicos trying to change the subject away from the problem to racism. Other objections will be sincere and heartfelt, but by oversensitive white-guilters or members of the same race as the criminal for whom pointing any flaw in anyone is racism to that person’s race.

Shouldn’t have to do it, but to avoid cries of racism and to preempt attempts to change the subject, focus on two criminals that fit the meme and make sure one is white.

I was thinking the same thing, Henry. Which means you stole it from me by thought-swiping.

But I was thinking of a four-person photo spread, and making it a nationally-based production, with local voice-overs for the state/local audience.

Damn, we should cash in on all this brilliance…!!!

Henry, that is a brilliant idea. Let’s use photos of a member of the Blue Men Group for all of these ads. Although it might be racist, there are too few Blue Men for the charges of racism to get any traction and to distract the discussion from the real issue, namely the early release of violent criminals who have not undergone any kind of rehabilitation or redemption.

I volunteer as the white guy. I’ve got a record! I’m unsavory!

Don’t know where you’re going to find enough white guys. Since George Zimmerman is half-hispanic and blacker than Homer Plessey and had to be…um, whitewashed in order to make the case about racism, I presume that real white guys are too hard to find.
Look harder, says I.