One of a rising number of voices. 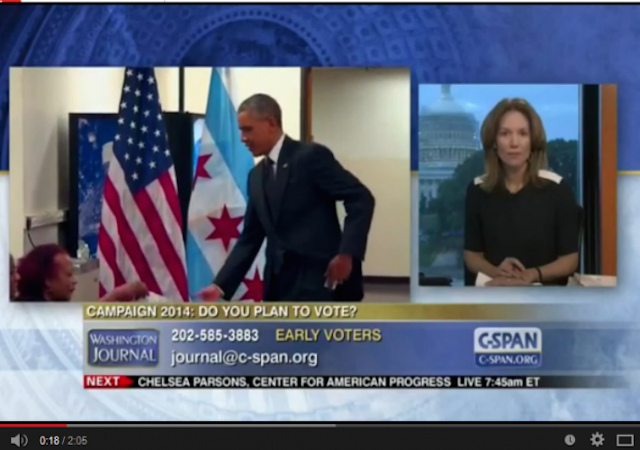 Are Democrats at risk of losing the most reliable voting base, Blacks?

Or, just as bad for Democrats, having low turnout?

This video may just be an anecdote, or it may be the sign of something larger happening.

An 82-year old Black woman named Joyce explains why she voted Republican for the first time in her life (via Tammy Bruce via Right Scoop).

Joyce’s rant is pure gold, and hits on the several points:

Black disappointment with President Obama himself is hurting Democrats in this election cycle.

Black voters’ disappointment with President Barack Obama, who they so eagerly embraced for so many years, could be costly on Election Day to Democrats, who badly need a big African-American turnout to win Senate and gubernatorial races in key states.

Instead, many African-Americans see an unemployment rate well above the national average, continuing problems with crime in many neighborhoods, and a president more interested in trying to help other voting blocs that didn’t give him such unwavering support.

…The black community, which gave Obama support like no other group, too often doesn’t see the investment paying off.

“People in this community just don’t think anything is going to change,” said Akua Scott, a Miami-based labor organizer.

Republicans are trying to capitalize:

Yet, the Democrats are still pinning their hopes on turning out the black vote next Tuesday.

Democrats say their efforts to bring black voters to the polls are succeeding and could save their Senate majority on Election Day.

Early voting by African-Americans is outpacing the 2010 midterms in many of the key races the party must win to hold the Senate, Democratic operatives say, with new registrations up among that segment of the electorate.

….[University of Virginia Center for Politics analyst Kyle] Kondik said, “there are some good anecdotal signs” across the country for Democrats. But ultimately, he said, it’s “hard to quantify” whether black voters will do enough to propel Democratic upsets.

The 2014 midterms may be historic — but not in the way Democrats want.

“The black community, which gave Obama support like no other group, too often doesn’t see the investment paying off.”

Still living on that plantation and expecting free stuff. Black people are their own worst enemy, just look at what goes on in Africa.

“Joyce” is a frequent caller on local Houston radio host Michael Berry’s talk shows (MichaelBerry.com). She took on local activist Quanel-X one afternoon on Berry’s show and schooled him.

Also, notice the C-SPAN taking head’s body language. She could not shut up Joyce fast enough. I’m sure she was getting an ear-full from the show’s producer.

Considering it only took her 82 years to wise up, I wouldn’t expect too many other blacks to cease their mindless devotion to the Democratic Party!

If I could “down thumb” that MINDLESS comment a hundred times, I would.

I logged on just so I could downvote you.

Let me help you Rags.

Perhaps her pearls of wisdom learned are more meaningful by being shared than your ignorant response, second only to your disrespect of her message.

There are A LOT of things that doom the African-American community – illegal immigration being the worst, and p!$$-poor education standards and employment prospects the most obvious.

If they start seeing what many others are seeing with the Democrats, they will soon realize they’ve been used… and robbed cold.

Nope, it’s not good for Democrats when they wake up. LBJ must be screaming like a banshee from Hell at this sight.

No… they’re just planning the next big thing. The Democrats fought to keep slavery. When that was abolished, they wrote the Black Codes and the so-called Jim Crow laws. When those were made illegal by the Civil Rights Act and Amendment to the Constitution, they decided to “kill ’em with kindness” and pass LBJ’s Great Society. This “act of compassion” essentially stopped forward momentum by Black Americans and put them into Democratic-controlled and -abetted bondage, administered by Democratically-controlled bureaucrats and Democratically-enabled and -funded “community leaders”, all to the advantage of Democratic politicians.

Count the letter D in that paragraph, and you win Section-8 Housing for a year and a new i-phone 6.

“Count the letter D in that paragraph, and you win Section-8 Housing for a year and a new i-phone 6.”

Or the grand prize: a lifetime guaranteed government job, maybe at the IRS, or HHS.

They aren’t going to start seeing anything. The deeply ingrained entitlement mentality, lack of intellect and real education, and consistent, in-bred willingness to be taken care of instead of developing the pride that leads to success will leave them right where they are and apparently want to be – a deluded bloc of outsiders trapped in their own world that they made. They made a bad choice and took the wrong path. Now they’re thrashing around and lashing out. Their handlers mainly channel black ire at whitey, so this lady is an outlier/renegade of sorts inasmuch as she’s on about obola instead of whitey.

Right now a few of them are mad at obola, but just because their honeymoon with him is over for some doesn’t mean they’ve suddenly developed initiative, independence and self-responsibility. It doesn’t.

Every now and again, our own little racist lets her flag fly.

This, of course, is the OPPOSITE of how Conservatives think of people. We see individuals. Not a race.

This won’t matter. Blacks will vote black always, with a few exceptions. They were “Alinskyed” decades ago by the ‘rats. That’s why they’re self-segregated. They are a bloc that self-identifies by skin color and so it will always be. Life is easier for them that way, or so they’ve been brainwashed into believing.

Headlines like this are completely ok for MSM and NPR… its below the mark for LI.

This blog has a high bar and headlines that are basically conjecture are below that. Keep it factual else its the same bullshit MSM feeds us.

You probably get your knickers in a twist when Rush talks football, too.

1) I don’t listen to Rush… he makes solid points, but blathers on incessantly
2) I don’t watch football. Partly because it has no impact on my life whatsoever and the big nail in the coffin was in protest to the NFL thinking Rush was too controversial to be an owner. Yes I’m a hoot at parties.

Your honor, I rest my case.

Look me in the eye and tell me you honestly could not tell the difference between this article and the bullshit the MSM feeds you, and due to the headline at that.

Go find a puppy to kick.

On this story… just change the parties and its exactly like an NPR news and public policy spin by anecdote.

Historically LI becomes a bit of a ra-ra GOP rag during elections.

You consider your subjective opinions to be objective facts for all. Yikes.

It’s poor writing and not up to snuff for LI. Piss off if you don’t like the feedback or go troll the lefties over at Huffpo where engaging in personal insult is passes for discourse.

Detroit Tigers’ outfielder Torii Hunter did his part to help Republicans gain support among black voters with a radio ad in support of Asa Hutchinson, the party’s gubernatorial nominee in Arkansas.

“Dr. King said that men should be judged by the content of their character,” Hunter, an Arkansas native, says in the radio ad.

“Today, we too often prejudge political candidates by their party label. I’m asking you to consider Asa for his actions,” he continues, per the Detroit Free Press noted. . “As a lawyer, Asa fought for more majority African-American districts in the state’s legislature. Asa is committed to the principles we hold dear, like a strong faith in God, equal justice for all and keeping marriage between one man and one woman. Asa wants all children to have access to computer science, to expand charter schools and bring more jobs and small businesses into our communities.”

Conservatives don’t come in wrapped packages. All brains are gray.

Just another reason to love the Tigers. Bless you boys!

Don’t worry black fellow Americans, the Democrat Party and President Obama are going to give you a gift of 10,000,000 low wage workers to take your remaining jobs.

I’m a libertarian that votes R, I have hopes that the GOP can get back to the primary core value – freedom. The more the gov messes with you, there is less freedom to start a business, build things, get a good job, or live the life you want.

Yes let’s judge on the content of ones character, really downplay the labels.