How bad a candidate is Martha Coakley? Boston Globe endorses Republican for Gov

How bad a candidate is Martha Coakley? Boston Globe endorses Republican for Gov

May a thousand Martha Coakleys bloom in the Democratic Party. 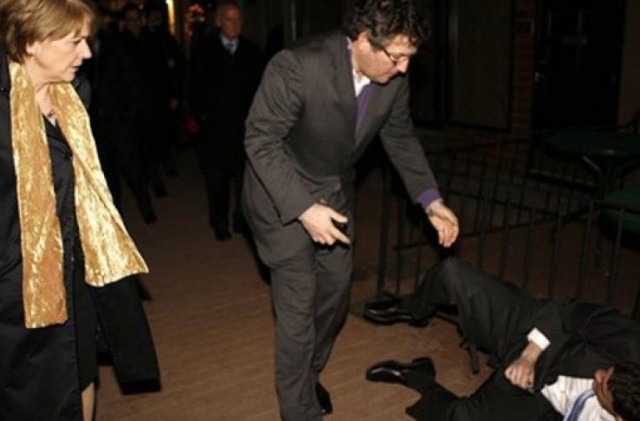 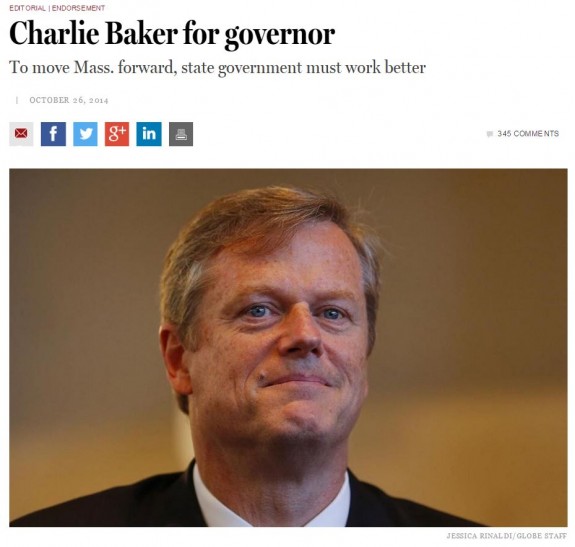 Effective activist government isn’t built on good intentions. To provide consistently good results, especially for the state’s most vulnerable and troubled residents, agencies need to focus on outcomes, learn from their errors, and preserve and replicate approaches that succeed. Baker, a former health care executive, has made a career of doing just that. During this campaign, he has focused principally on making state government work better. The emphasis is warranted. And in that spirit, the Globe endorses Charlie Baker for governor…..

… Coakley’s campaign up to now suggests an odd reluctance to seize the initiative. Even as a prohibitive favorite during the Democratic primary contest, she was unwilling to spell out an issue agenda — raising the possibility that, if she is elected, the public discussion might drift toward whichever priorities legislative leaders decided to emphasize. For instance, lawmakers seem to have cooled lately on education reform. Coakley’s positions in this area, such as on raising the cap on the number of charter schools in the state, appear to be a work in progress. Baker would provide full-throated support for the kind of high standards, accountability, and innovation that will give all children in Massachusetts the opportunities they deserve….

At a difficult inflection point in state government, Massachusetts needs a governor who’s focused on steady management and demonstrable results.

That’s how bad a candidate Martha Coakley is.

So bad that in early 2010 when running for Senate against Scott Brown, she made the comment which serves as the poster child for what a politician should not do:

Coakley bristles at the suggestion that, with so little time left, in an election with such high stakes, she is being too passive.

“As opposed to standing outside Fenway Park? In the cold? Shaking hands?’’ she fires back, in an apparent reference to a Brown online video of him doing just that.

Coakley never has shaken that image of the out-of-touch, I-know-better-than-you politician. That’s enough to kill the campaign even of a Democrat in Massachusetts.

Click here for more from our Martha Coakley archives.

” Baker, a former health care executive, has made a career of doing just that. During this campaign, he has focused principally on making state government work better. The emphasis is warranted. And in that spirit, the Globe endorses Charlie Baker for governor…..”

That’s how good a candidate Baker is.

On the plus side it looks like an R will when governor in MA.

On the negative side the reason he is going to win is that he is well within the political sphere of the left.

This is MA, but the fact that most R candidates across the nation are to the left of the average D a generation ago is a real problem.

Representative government doesn’t work when all the candidates on the ballot essentially want to do the same things.

I would have loved to have seen the faces at Marsha’s (sic) headquarters when they heard about/read this.

Cubs in World Series next year?

Truly the end of times.

NEVER FORGET that Martha Coakley tried to get a guy who raped a 23 year old BABY, with a hot curling iron, no jail time for his brutal and despicable crime. Oh, and there’s much more, check out this link at neo-neocon from back when she was running against Scott Brown in 2010:
http://neoneocon.com/2010/01/14/martha-coakley-and-the-child-molesters/
Here is a sample of why it’s crazy that Coakley hold ANY gov’t office:
” In 2008 a father punched out a janitor in a Market Basket supermarket because he found the employee reaching in under a bathroom stall in the men’s room to touch the leg of the man’s 4-year old child while the boy was urinating. The illegal alien janitor was charged with indecent assault (he later no showed at his hearing), but the boy’s father was also charged with assault. Coakley’s comment on a radio show? “We really discourage people from self-help.” ”

It might be hard to design a worst candidate for Governor or US Senator than Coakley. She is routinely dreadful out on the campaign trail and her years as a prosecutor have created enough skeletons in her closet to stock a Halloween superstore.

She’s no Trey Gowdy, that’s for sure.