Want to win in November? Make a phone call (or knock on a door.) 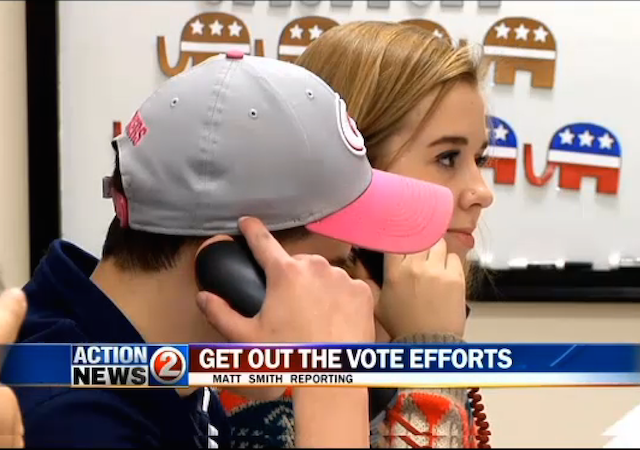 Yesterday I posted an article detailing what a recent Pew data dump tells us about how voters most likely will behave through early voting and the end of the 2014 election cycle. We already know that hard Democrats’ minds won’t be changed in time for the midterms, and that instead we should be contacting both independents and likely Republicans to ask for their votes.

“Ask” is key, and if (extremely) early returns from key states like Wisconsin and Florida are any indication, Republicans’ boots on the ground efforts are working.

In Wisconsin, for example, both candidates and pollsters agree that the gubernatorial election between incumbent Republican Scott Walker and Democrat challenger Mary Burke will be decided by which party turns out the most voters.

“The Governor’s getting 96% of Republican voters; Mary Burke’s getting 94% of Democrats. There is just no crossover vote this year,” said Charles Franklin, a Marquette University Law School pollster.

“Democrats have really learned a lot in the last few cycles about technology of voter contact. Republicans have been mounting a very aggressive phone bank campaign, so both parties know that turnout is the key here. The unknown: how will their voters respond? Who will wake up on Tuesday morning and go “I don’t feel like going out today?’ Or who will go out and say ‘my vote counts.’ It could make the difference,” said Franklin.

In a world of zero crossover, the ask is key. According to the article cited above, Republicans are casting a slightly wider net than are Democrats, but if Marquette’s numbers are correct, that net amounts to a 15% buffer for Republicans, and a 15% advantage when it comes to a direct ask between volunteer and voter.

That’s nothing to sneeze at in a battleground state.

In Florida, early numbers on absentee ballots have Republican Rick Scott up by a substantial margin (48% to 35%) over Democrat Charlie Crist. This isn’t news, but the fact that Republicans have increased that margin to just over 13% is.

Yesterday, it looked as if Democrats were starting to really pull ahead in Hillsborough, remaining close in Miami-Dade. But now Republicans are widening the gap.

But after the 2012 elections, when President Obama was supposed to have left a solid campaign infrastructure behind, Democrat Charlie Crist should probably be doing better. This is a measure of voter interest in a campaign and a campaign’s ground-game turnout operation. So far, Scott is winning on both counts.

Democrats can still pull even, either with an improved ballot chasing program or an early-vote operation.

The moral of the story is, keep asking, and keep asking the right people. RNC and state level strategies are targeting these people for a reason, and if numbers from Wisconsin and Florida are any indication, Democrats could be in for a very ugly surprise even before Election Day rolls around.