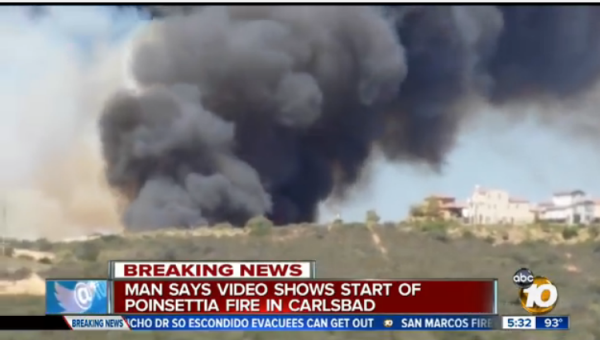 We all know that President Obama golfs even as the world burns, but a San Diego golfer’s swing may have been the cause of one of the many wildfires that plagued California back in May.

The Poinsettia fire began at a golf course and eventually incinerated 600 acres and destroyed or damaged 27 dwellings and three commercial buildings. Its origin appears to have been a titanium golf club.

As for arson, a viral suspicion on that infernal spring day, Fieri found no evidence of an incendiary device.

“Based on the location of the fire’s origin, and interviews conducted by the Carlsbad police,” he wrote, “I have ruled out any fire causes that resulted in a deliberate act of circumstances in which a person ignited the fire.”

That leaves Fieri with only one explanation he could not reject out of hand — a “smoldering ignition source that had direct contact with combustible materials.”

Given the starting point on a golf course, Fieri concluded that the blaze may have been started either by a burning cigarette or cigar (though he could find no physical evidence in the windy, charred ignition area) or a spark created by a “titanium golf club head” hitting a rock.

Two wildfires in Orange County have been linked to players hitting out of rocky lies with dry vegetation nearby.

James Earthman, a chemical engineering and materials science professor at UC Irvine, confirmed in a study that clubs containing titanium can produce sparks of up to 3,000 degrees that will burn for more than a second.

“And that gives the spark plenty of time” to ignite dry terrain,” he told reporters in March. “Titanium reacts violently with both oxygen and nitrogen in the air.”

Local resident Ronnie Martin captured some video while he was fleeing the fire:

An ABC News video interview with an eyewitness tends to confirm this hypothesis, as he reports a golf cart drove rapidly away just as the fire erupted (video link here).

As a reminder, there were ten named wildfires that occurred in the San Diego area. The Berndardo Fire was declared the result of a construction accident, and the Cocos Fire was deemed arson. The causes of the remaining 8 are still under investigation.

Home and business owners who were affected by the Poinsettia Fire are now plaintiffs in a lawsuit against the resort where the blaze began.

A lawsuit was filed against Omni La Costa Resort & Spa accusing the resort of negligence when the Poinsettia Fire started in May.

The lawsuit filed Friday alleged La Costa Resort was responsible for starting the fire due to negligent maintenance and operation of its property and equipment, and for failing to safeguard against the fire spreading into neighboring residential communities once it started.

Multiple plaintiffs are part of the lawsuit, including homeowners and renters who lost everything they owned, businesses that were damaged and others who suffered injuries due to the fire.

Because October is the month during which some of the area’s most infamous wildfires have occurred, San Diego residents are currently on high alert.

Maybe they should check their golf habit until the end of the year.

It’s well known that many early-American mountain men, and it’s rumored even Lewis and Clark, carried a set of Titanium Peng irons to use in starting campfires when flint and steel failed.

Rumors that Titleist irons were also carried by some cannot be substantiated. However, this may be due more to the fact that Jim Bridger and Kit Carson were always depicted with Peng irons, and we have no corresponding imagery or contemporary accounts of others using Titleist irons.

Time for Big Daddy Gubmint to step in and regulate golf.

…and golf clubs
…and rocks

My club speed is so low I doubt that I could start a fire even with a titanium club.

I use one of those whippy shafts for seniors. Adams makes great clubs for seniors. But I don’t believe this spark theory in any case.

My swing is so bad, I’d have trouble using a MK-23 flamethrower!