Fundraising emails: The Ebola of your Inbox

Fundraising emails: The Ebola of your Inbox 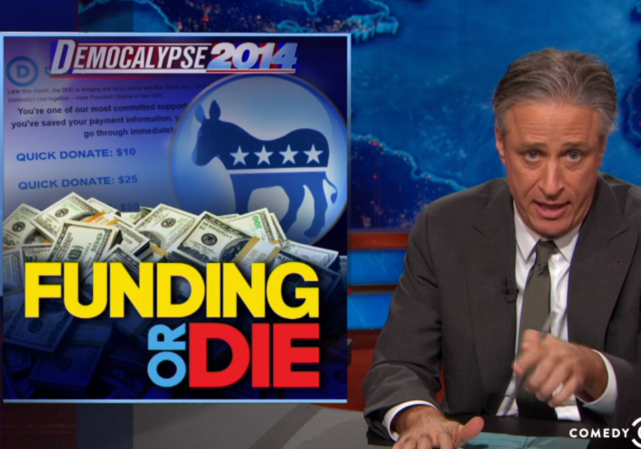 If you’re reading this blog, you’re probably experiencing an email inbox inundated with desperate campaign asks. The worst offender this election season is without a doubt the DCCC (Democratic Congressional Campaign Committee).

So far, I’ve received emails from Nancy Pelosi, Joe Biden, and even the President himself this midterm cycle. The dramatics and the guilt are almost too much to bear. Good thing I’m Catholic. Here’s a sampling of a few emails that have made their way through my spam filters:

For all the wailing and gnashing of teeth to “get money out of politics,” The Democrats are acting particularly hard up for cash this election season.

Also annoyed by the steady string of embarrassing DCCC emails, Jon Stewart had this to say on The Daily Show (slightly NSFW):

Couple the desperate fundraising emails with news of the DSCC pulling out of Kentucky Senate race and one might conclude the Democrats have had better election cycles.

[The title was changed shortly after publication]

Funny how I don’t get any of those…wonder why he does?

I wonder if it’s dawned on any of the ‘rats that their “constituents” are broke, thanks to themselves and their Marxist-in-Chief leader.

Or they are just lying to get their “folks” to break out the last dime in their piggy banks and give it to them ostensibly to prevent the dastardly ‘pubs from taking charge.

Not A Member of Any Organized Political in reply to JackRussellTerrierist. | October 16, 2014 at 9:38 pm

I’ve been getting dozens and dozens of their worthless, lying SPAM emails every week. It forms grounds for a lawsuit I think – since the Demorats are slipping right through Bill Gate’s Microsoft spam filters. Bill Gates is a Democrat right?

It ain’t just the dems. My inbox is flooded with solicitations from the Republicans. Thank God and Bill Gates for A Delete.

That should be Alt-A Delete. The forum software ate the greater-than/less-than signs.

The fascist’s frantic fundraisers are just consistent with who they are.

As Jonah Goldberg pointed out in “Liberal Fascism”, the Collectivist mind requires turmoil. Dr. Thomas Sowell has made the same observation. They LIVE to have their hair on fire.

The money-whoring people know their audience, and speak to their crazy.

Don’t be suckered by this fundraising stuff. The community organizers are out and doing the footwork.

Do you think some of them are taking it for their own personal use?