Friday Night at the Fights

Friday Night at the Fights 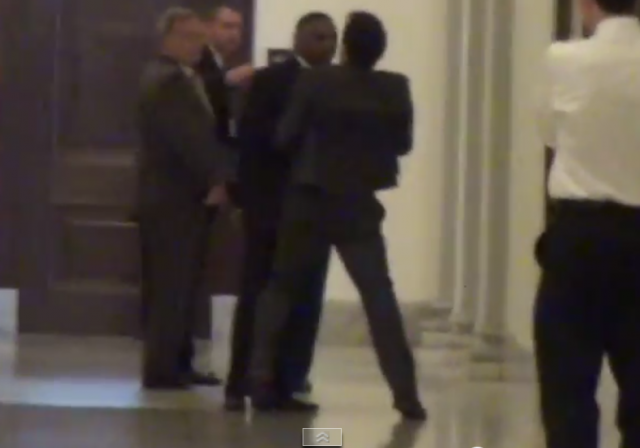 Senator Harry Reid is known for his rants against the “1%” and evil Republican moneyed types. Never mind that Reid stays in the Ritz Carlton when he’s in D.C. or that he’s worth over 6 million bucks, of course.

Ambush journalist, Jason Mattera, caught up with Senator Reid and asked him about his wealth.

“Hey Senator Reid? Let me introduce myself, Jason Mattera. Hi. How’d you become so rich working in government? How does someone on a government salary most of their career accumulate your type of wealth?”

At which point one of his security guards tossed Mattera up against a wall and demanded repeatedly, “Are you press?”  Take a look:

So when are assault charges going to be filed?

He should press charges.

That’s LOIS, of course, not Louis.

The Bodyguard was WAY out of line shoving Mr. Matera against the wall like that. He could have handled the situation much better by simply obstructing the doorway, after Harry Reid had stepped through.

I do hope Mr. Matera does press charges. That was clearly uncalled for, and Mr. Matera has every right as a US Citizen to question a public official on public grounds or in a public building.

It’s not just any bodyguard we’re talking about either. It’s a US Secret Service Agent who just assaulted a US Citizen!

The police put out a statement saying it’s all Mattera’s fault for not wearing credentials and presenting a security risk.

Ironically, the federal government is running an anti-bullying campaign. The comedy writes itself.

This is a natural consequence of having an obsequious press – once it becomes the norm that the press doesn’t challenge liberal politicians, it’s a small step to viewing challenges to them as an offense that can be punished.

This is exactly how Michael Moore made his reputation and fortune.

Unlike Moore, Mattera isn’t lying or falsely editing the video.

Lots of libs are complaining about the video. No doubt, they are the same ones that celebrate Moore and his dishonest ‘documentaries’.