And Democrats running for office should be afraid, very afraid. 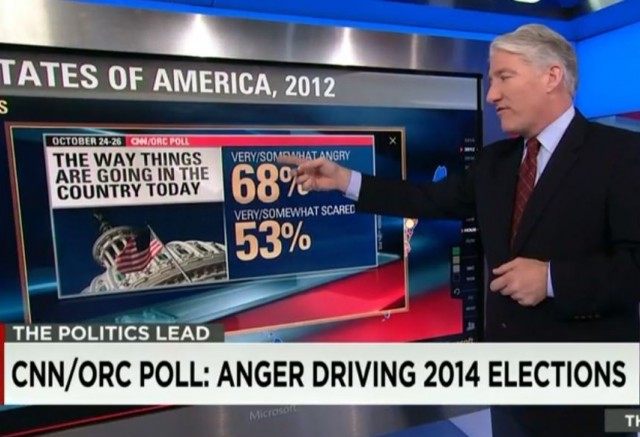 You don’t need polls to tell you that there is a fearful, ornery mood out there.

But it is confirmed by the polls, and Democrats are the primary recipients of that anger.

We wrote about this a week ago, Election 2014: America “completely out of control” and “women feel unsafe”.

The mood does not appear to be getting any better.

Nearly 7 in 10 Americans are angry at the direction the country is headed and 53% of Americans disapprove of President Barack Obama’s job performance, two troubling signs for Democrats one week before the midterm elections, a new CNN/ORC International Poll shows….

The CNN/ORC poll shows that 30% of Americans are “very angry” and 38% are “somewhat angry” about the way things are going in the country, while 31% expressed “no anger” at all. CNN Polling Director Keating Holland notes the 31% of “very angry” Americans matches the mood of the country in 2010 when Republicans took back control of the House.

In next week’s election, the emotion of anger could be a motivating factor in driving out GOP voters. While 36% of Republican voters said they are “extremely” or “very enthusiastic,” about voting this year, only 26% of Democrats use that language to describe themselves, in the CNN/ORC poll.

From The Washington Post, voters are taking their anger out on Democrats:

Republicans enter the final week of the midterm campaign holding higher ground than the Democrats, aided by public dissatisfaction with President Obama’s leadership, with the overall direction of the country and with the federal government’s ability to deal with major problems, according to a new Washington Post-ABC News poll.

Driving attitudes is a pervasive sense of a country in trouble. Overwhelming majorities say the country is badly off-track and give the economy negative ratings. Economic expectations are little better today than they were at this time four years ago.

Six in 10 say they cannot trust the government in Washington to do what is right — the same as a year ago in the aftermath of the government shutdown and the botched rollout of the federal Web site for the Affordable Care Act.

With multiple crises confronting the country — including the spread of Ebola in West Africa and cases here at home, as well as threats from Islamic State militants — a majority now says the government’s ability to deal with big problems has declined in the past few years. Among those who say this, more — by 3 to 1 — blame Obama and the Democrats rather than Republicans in Congress.

The gov costs too much, spends too much, does too much of the wrong things and then lies about it all. Did the politicians really think that the public wouldn’t get angry?

They tell one another that the only people that are angry are a bunch of old, white men. You know, like the ones who got upset by the government’s failure to protect those two young, racial minority, female-type nurses.

I am long past being amused at being mischaracterized as a conservative man.

We have a dedicated, radical Collectivist heading a nest of outlaws at the head of government, and he’s very clearly signaled he will do what he wants regardless of public sentiment and will shred the law, including the Constitution.

If that doesn’t make you BOTH angry and frightened, you are one of the Collective.

The outlaws, academics, bankers, and parasites are getting fat and happy. That’s Obama’s constituency, and he sees no need to even pretend to care about anyone else.

From the “They Started It” department is this amazing contrast of 2 photos. Under Obama/Ebola, don’t panic. When we had Bush, Bird Flu will kill us all!
https://twitter.com/BarneyFranken/status/527150346150617089/photo/1

One of the most frightening things I’ve seen lately (though there’s so much to choose from) is the hacking of a (real) reporter’s computer and the secreting therein of classified documents.

The hacker had access to classified documents, along with a very sophisticated technological capacity.

Who had the means and the motive to frame a reporter for criminal charges of illegally possessing classified documents? Might we draw a clue from the fact that the reporter in question has been tenaciously investigating scandals in this administration?

When the president publicly attacks news organizations that don’t carry water for him, imagine what he’s doing secretly.

When he broke the second seal, I heard the second living being say, Go! Another horse went out, a red one, and its rider was given the power to take peace away from the earth and make people slaughter each other. He was given a great sword.

When he broke the fourth seal, I heard the voice of the fourth living being say, Go! I looked, and there in front of me was a pallid, sickly-looking horse. Its rider’s name was Death, and Sh’ol (Hell) followed behind him. They were given authority to kill one-quarter of the world by war, famine, by plagues and with the wild animals of the earth.

The angel of the Lord said to her (Hagar), I will greatly increase your descendants; there will be so many that it will be impossible to count them. The angel of the Lord said to her, Look, you are pregnant, and you will give birth to a son. You are to call him Ismael because God has paid attention to your misery. He will be a wild donkey of a man, with his hand against everyone and everyone’s hand against him, living his life at odds with all his kinsmen.

Do the math and connect the dots. Fear is nothing compared to what is coming.

Is this the year for all GOP voters to go to the polls in orange Hazmat suits?

I doubt that the Dims are trembling in their boots — after all, they have an ace up their sleeve: vote fraud.