“…Could be this generation’s version of polio.” 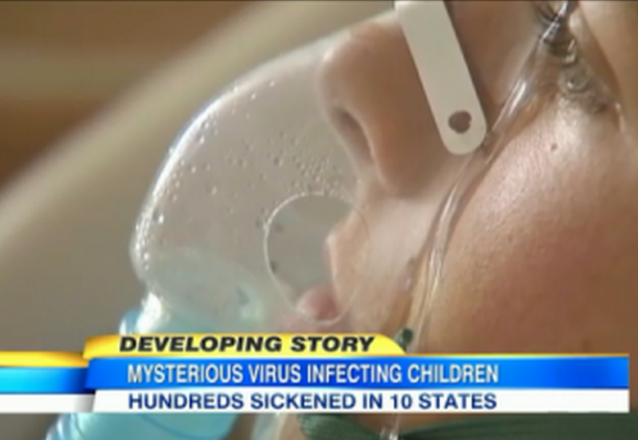 While all the Ebola-stricken patients in America seem to be on the road to recovery, with the tragic exception of patient zero Thomas Duncan, Enterovirus-D68 is reported to have claimed its 8th victim:

The U.S. death toll from the mysterious Enterovirus D-68 continues to rise.

The latest CDC update on the current outbreak of the polio-like Enterovirus D-68 states that it has now been detected “in specimens from eight patients who died and had samples submitted for testing.” That’s one more death than was disclosed in last week’s update. The CDC account does not provide any information as to where the patient died and does not disclose his/her name, age or other details.

According to the latest weekly update from CDC, 167 more people have been sickened with EV-D68 in the past week: a total of 973 patients in 47 states and the District of Columbia. That’s up from last week’s total of 796 people in 46 states.

Two new cases have just been reported in North Florida.

Unlike the popular saying, if it quacks like a duck, then it probably is a duck. Health department workers tell us Enterovirus D-68 is a lot like having the common cold, except it isn’t.

…Elmira Warren a Gainesville resident said, “I am concerned, I think it’s important for us to be in touch with our bodies and if we have any type of symptoms that may be similar to that we should see our physicians.”

And Arizona reports its first confirmed case, but many other cases are awaiting the results of testing to determine of they are related to infection with this pathogen.

The CDC has confirmed one case of enterovirus-68 in Arizona. It’s not known where that person lives.

A spokesperson for the Arizona Health Department said officials are waiting on results for 17 more tests.

…These viruses usually appear like the common cold; symptoms include sneezing, a runny nose and a cough. Most people recover without any treatment. But some types of enterovirus are more serious. These can cause hand, foot and mouth disease; viral meningitis; encephalitis (inflammation of the brain); an infection of the heart; and paralysis in some patients.

This year, EV-68 seems to be exacerbating breathing problems in children who have asthma. The virus has infected at least 277 people in 40 states, according to the CDC. Cases have also been reported in Canada.

Despite the lack of media attention on a virus that causes death and paralysis, the medical community has been racing to get answers:

Enterovirus D68, which has hospitalized hundreds of children in almost every state and been linked to at least four deaths, may also have caused unexplained paralysis in cases from Boston to San Diego, doctors said. Researchers said they fear EV-D68 could be this generation’s version of polio, said Ben Greenberg, a Dallas-based neurologist.

Enterovirus typically causes only mild cold symptoms in most patients. Now, though, U.S. health officials are probing whether EV-D68 is directly linked to the paralysis. At the same time, more than 50 doctors at top U.S. hospitals are holding regular calls and pooling research, seeking to pinpoint physical changes that may lead to a treatment or a vaccine.

They are in a race against time as the EV-D68 outbreak has yet to wane. “We don’t want to repeat mistakes of history,” said Greenberg, of the University of Texas Southwest Medical Center. “If we could have accelerated the polio vaccine by a decade we could have saved a lot of people from the illness.”

Greenberg, who spoke by telephone, said he didn’t realize the full scope of the problem until early last week. After reports of a cluster of 10 paralysis cases in Colorado, he and 30 other neurologists, infectious disease experts and public health officials hastily organized a conference call Sept. 29.

To Greenberg’s surprise, almost every doctor on the call, from Boston to Chicago to Los Angeles, had seen at least one case of unexplained paralysis in the past several months, and some had seen as many as 10.

The cause for the paralysis seems to be that the connection between the spinal cord and muscles is interrupted. However, I second Greenberg’s assessment that this is polio for the new millennium.

Microsoft’s Paul Allen just donated $100 Million to fight Ebola. Hopefully, medical researchers will be funded so that they can begin to effectively wipe-out Enterovirus-D68, a much easier-to-catch virus that is proving to be deadly in its own right.

The Obama Virus, brought to your school by legions of infected illegals.

Why doesn’t the LSM report this? Central American revenge virus. If my kid died from this, there would be hell to pay. And I know exactly who would pay the price.

Intravenous Vitamin C can cure polio. Why won’t physicians try it? It’s harmless, and it’s used by many physicians today for many conditions.

Not surprising the epidemiology of this is not being reported. Dumping so many illegal aliens with major diseases, not even evaluated at the border, and dispersing them throughout the country would be the first go-to on list why this is happening all over the country. IF we knew the names and places of origin for illegal aliens, I bet the links would be obvious. More US citizens have died from this than Ebola…. however the greater good of the Party and the Movement is too valuable for concern over a few lives when the nation is within their grasp for power.