Early Voting Turnout for Republicans in Iowa is Unprecedented

Early Voting Turnout for Republicans in Iowa is Unprecedented

“This has never happened before.” 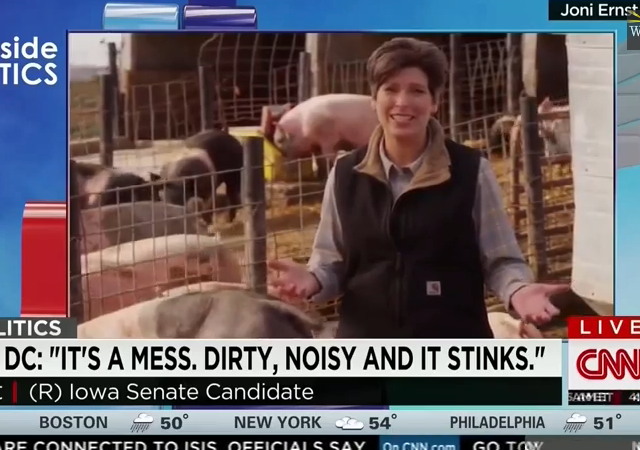 Kirsten Hunter of the Washington Free Beacon reports that even CNN is acknowledging the trend:

Iowa Republicans banked a surge of early voters this week, a practice usually dominated by Democrats in the state.

Hamby elaborated that Republicans are at a “parity” with Democrats after assessing this week’s early Republican votes.

This “has never happened before,” Hamby said. “Braley wants that number to be higher.”

This surge may explain why liberal news sites are attacking Joni Ernst for expressing her completely Constitutional views on the Second Amendment.

Sam Levine of the Huffington Post is just horrified by something Ms. Ernst said in 2012:

Joni Ernst: My Gun Will Defend Me If Government Decides ‘My Rights Are No Longer Important’

Joni Ernst, the Republican candidate for U.S. Senate in Iowa, said during an NRA event in 2012 that she would use a gun to defend herself from the government.

“I have a beautiful little Smith & Wesson, 9 millimeter, and it goes with me virtually everywhere,” Ernst said at the NRA and Iowa Firearms Coalition Second Amendment Rally in Searsboro, Iowa. “But I do believe in the right to carry, and I believe in the right to defend myself and my family — whether it’s from an intruder, or whether it’s from the government, should they decide that my rights are no longer important.”

And the problem with that comment is… what again?

One problem with so many early Republican voters: The Dems now know how much they need to cheat to steal this election.

Iowa Dhimmi’s have had considerably training from MN Dhimmi’s on how to stuff car trunks with uncounted votes. Of course, those Iowans all have “Smart” Cars with smallish trunks.

It is not just Iowa. According to the American Thinker column linked below referencing Jim Geraghty’s work at NRO, Republicans are blowing the doors off early voting in Iowa, Nevada, Colorado, Louisiana, and Florida. Of course, the question is how many of these Republican voters would have voted on election day anyway? My guess is quite a lot. However, in prior cycles, Democrats have worked hard to get their voters to vote early. So if Democrats are deciding not to vote early, my hunch is that many have decided not to vote at all.

Then there’s this AP poll showing the generic ballot favors Republicans by 8. It’s an outlier compared to the average, but if it is accurate it’s signaling a big red wave. I think it was Charlie Cook who said either in 2010 or 2012 that historically the generic ballot overestimates Democrats by 2 points. Which means we’re potentially looking at R+10.

Apparently a whole bunch of voters are eager to begin castrating DC hogs. Or at least want to watch Joni do it.

Son, it would be worth a dollar a quart!

THE most important, deciding factor WILL be voter fraud. Those who deny massive amounts of voter fraud are either ignorant or complicit. This is something I’ve been railing about over the past many years and it has been growing exponentially with each, passing election cycle.

Democrats now include fraud as a usual part of their campaign strategy. 16% Illegal Aliens ADMIT to being registered and voting – how many more simply didn’t cop to committing a felony? Computerized voting has made fraud child’s play with touch screens directly tampered with, computer hackers tamper with machines without laying a hand on them. Then you have those who proudly proclaim to have voted dozens of times in a single election or the many votes of the dead along with Disney characters.

Bottom line, America has a long tradition of peacefully redressing the government at the ballot box. What happens when the majority of Americans discover, between gerrymandering, voter fraud, suppression of military votes, and a wide variety of other dirty tricks and foul play that elections are now pre-determined? That they can no longer peacefully take their gripes to the ballot box?

One more thing, if Republicans do manage to eek out wins, take the senate, increase House seats, they will have two years to minimize fraud. You’ll never eliminate it completely but must minimize it. At this point, the ONLY way Republicans CAN win is if there IS a tsunami of votes. Fix it NOW or Republicans may never win a major election again.