Do Republicans have enough momentum heading into midterms?

Do Republicans have enough momentum heading into midterms?

Now, to beat the margin of error.

With just 9 days to go until Election Day, consultants and pollsters are busy running the numbers and developing eleventh hour strategies for candidates running for Senate in key swing states.

In competitive states like Colorado, Iowa, Kansas, Arkansas, and North Carolina, Republican momentum has pushed those Senate races to well within the margin of error, and even the New York Times has Republicans well ahead of Democrats and on track to take back the Senate.

“Senate contests are coming down to the wire,” says pollster Barbara Carvalho of Marist College’s Institute for Public Opinion. “ In a reversal from 2012, when there were multiple paths for [President] Obama, now the Democrats are struggling to protect their firewall in Iowa, North Carolina and Colorado.”

All five of these races are within the polls’ margins of error. The lone exception is the NBC/Marist poll of South Dakota, where Republican Mike Rounds enjoys a 14-point lead over Democrat Rick Weiland, 43 percent to 29 percent, while independent Larry Pressler, a former Republican senator, gets 16 percent. To win control of the Senate, Republicans must gain a net of six seats. Two pick-up opportunities – in Montana and West Virginia – appear to be slam dunks for the GOP. And South Dakota, per the NBC/Marist poll, looks to be a safe bet for a third.

That means Republicans need to win three out of these seven other Democrat-held seats to get to a majority: Alaska, Arkansas, Colorado, Iowa, Louisiana, New Hampshire and North Carolina.

But if Democrats win a GOP-held seat – say Georgia – or if Orman decides to caucus with Democrats, that means Republicans must win an additional seat (or two) to net six Senate seats.

The Times’ predictive software gives an even better picture of just how attainable a Senate majority is for Republicans. A combined result of 250,000 separate simulations has a think Republican majority as the most likely result of November’s elections: 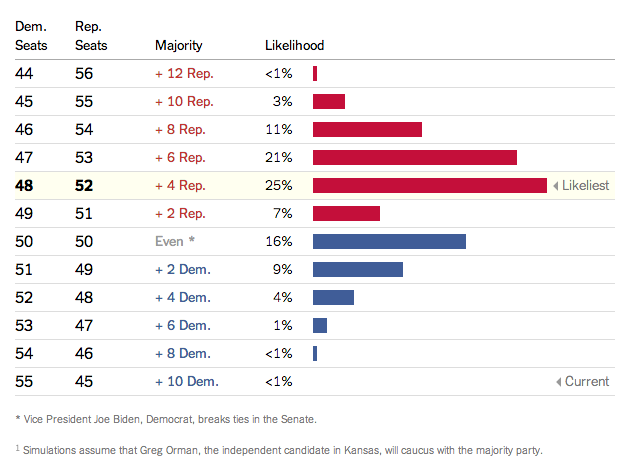 Multiple national polls tell a similar story. Polls from the New York Times, 538, DailyKos, Huffington Post, Princeton, PredictWise, and the Washington Post each have Republicans taking the Senate (Princeton has the parties at even odds) by as much as an 87%-13% split (Washington Post.) Additionally, the Times has Sens. Landrieu (LA,) Prior (AR,) Udall (CO,) and Begich (AK) losing their seats (some in a landslide)—but their numbers also have Kansas Republican Pat Roberts at a 57% chance of losing his seat.

None of this should make Republican voters comfortable or complacent. Polling isn’t an exact science, and neither is GOTV strategy. Each day that goes by gives both parties time to hit up undecided and independent voters for their support; Republicans should use their momentum to reach out to crossover and past general election voters, and also to get consistent supporters to actually go to the polls and vote the entire ticket.

Margin of error? Don’t you mean the level of cheating?

Anyone have any idea as to whether Scott Brown can pull this off? Shaheen has been mostly leading by one to three points.

It would take a miracle, like a massive car accident in which truckloads of fraudulent ‘rat vote ballots collide and fail to make the deadline.

I’m sorry, I can’t get my expectations too high, I fear the fraud …

Fearing isn’t a positive action. Do something concrete and constructive like volunteering as a local poll watcher. It makes a difference. There are twice as many Republicans sitting on their hands and fearing their liberty away than there are those who are willing to make their presence known at the polling stations.

And I fear that, being the Republican Party, they’ll find a way to botch the whole deal.

As an aside, can we *please* stop giving any credence to the RealClearPolitics average? It is worse than useless; it gives equal weight to polls that have a good predictive history as those who are absolutely terrible. It just magnifies the impact of a Zogby poll, for instance, which has a terrible track record, while lessening the impact of a Rasmussen or SurveyUSA poll, which have been comparatively better.

It’s not a bad way to gauge a race early on, but as the election comes closer, averaging older polls equally with later ones also tends to smooth out the trend lines, deemphasizing the late surge that often makes the difference in a close race.

The RCP Average was a clever tool when devised, but it should never have become a talisman as it has to too many observers.

I wish these pollsters would stop saying Orman “will caucus with the majority party”. If history means anything – and it almost always does – Orman will have his lips firmly attached to Obama’s backside and will vote however Harry Reid wants.

Greg Orman claims to be an independent candidate, but he is as “independent” as a sea lamprey.

This is how Collectivists win. They lie.

He’s run as a Democrat in the past, and over 90% of his contributions have gone to Democrats.

He’s a Democrat. Only an idiot believes him to be more ‘independent’ than Bernie Sanders or Angus King.

The ‘rat multi-tactical voter fraud machine has been in full swing for a couple weeks now.

The ‘pubs won’t muster a fight until after the election when it’s too late.

That’s their M.O.. They’ve given no indication they intend to change that.

We MIGHT get the senate, but it seems unlikely to me that we will because too many races are too close. The ‘pub leads in those races are 1-3 points at best. That’s plenty of margin for fraud to swing it to the ‘rat.

Republicans can win the Senate, but that doesn’t mean they can or will do anything to stop the march of Obama. Remember, that means Reid and Boehner will be running Congress. Do you remember the government shutdown and the deals that opened it back up and all those debt ceiling hikes?? It won’t help to be the party in charge of Congress if you’ve got turds running it!

Either way, the *current* GOP is nigh on useless at the federal level.

Larry Kudlow wrote a piece the other day that you might want to read.

It is a lot more optimistic than are you. Me? I’ll watch and see.