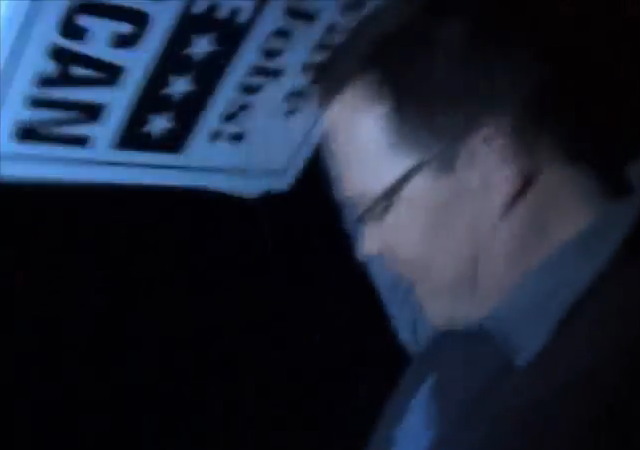 What’s one to do when it looks like the midterms aren’t going their way?

Stealing Republican lawn signs is always an option, as long as you don’t get caught. One Delaware Democrat wasn’t so lucky.

The Democrats have become the win-by-cheating party, so much so that the President of the United States jokes about vote fraud to a party rally, just as he joked about using the IRS to punish his political opponents. Just as a fish rots from the head down, so too does a political party that depends on the votes of ineligible aliens and that fights tooth-and-nail against the sort of voter identification measures common in other advanced (and not-so-advanced) democracies.

The ethos, one that predates Obama by a century or more, has filtered down to the local level, for instance a contest for the Delaware State Senate (hat tip: The Blaze). In the town of Middletown, GOP lawn signs bearing the slogan “Fix the Economy! Vote Republican” had been disappearing, so GOP volunteers set up a surveillance operation and caught the miscreant, who happened to be the husband of an incumbent state senator, one Sen. Bethany Hall-Long.

The sting was caught on video and here it is:

“It happens all the time, all over the country,” said Paul Brewer, associate director of the University of Delaware’s Center for Political Communication.

As far as campaign strategies go, “I think it’s a pretty ineffective one,” Brewer said. The reward isn’t worth the risk. “Is it going to make that huge a difference if a few yard signs are gone? No. And if you get caught, especially if you’re connected to a campaign, the blowback could be quite extensive.”

From Papa Joe’s state. Kick him in the nu*s.

The President of the United States can joke about vote fraud because he IS a joke, and he likely only became president because of vote fraud.

This is yet another indicator of why we need voter ID. There are examples every year of people who get caught up in the election, and they are willing to cheat in any way they can, effective or not.

Really, what does stealing a yard sign accomplish? I submit that, at best, it is counterproductive especially if the neighbor complains to others, or if the thief gets caught. And yet people do it, because it is the little bit they can do.

When they have the power, they do more. Lyndon Johnson was known as “Landslide Lyndon” for a reason, whether he earned the title, or someone else did for him.

Let’s be fair. Let’s be honest. Let’s be clean. Then we can accept the results.

Valerie, it will never be clean. Where I live, Dems are in control of all election boards. For liberals, politics truly is a way of life. Most of the conservatives I know, even the ones who have become very active in local campaigns, want absolutely nothing to do with politics. No one who is honest wants to go into politics. What I personally witnessed in 2010 (a full year of volunteering for a very good conservative candidate) cured me of ever wanting to do it again at the ground level. It’s a filthy, disgusting business for corrupt narcissists. This is why Democrats are naturals at it.

“Fair, honest, clean” sounds like big-time losses to me. It’s like taking a toothpick to a gunfight.

I’m not suggesting vote fraud or sign-stealing, but I am suggesting staying on top of them like stink on s–t and videotaping everything they do……and keep plenty of backup ready. Plan for and respond to a down and dirty street fight with counter-measures with the same cunning and vigor they use.

We need to quit being so damn nice and pure.

I was very active in a local campaign for Congress here in the Hudson Valley in 2010, the year of the Tea Party tsunami. Democrats were stealing our lawn and yard signs as fast as we could put them up. They cannot win if they don’t lie, cheat and steal their way there. They know it and they’re proud of it. When we conservatives refuse to play on the same battlefield, we concede the war.

I’m confused. Are you saying we need to lie, cheat, and steal?

Nope, but we have to fight back. When the Dems cheat via massive fraud, the GOP does nothing, partly because they got caught cheating years ago and signed an agreement never to investigate any accusations of Democrat fraud. Individuals may pursue these but the party never will. We also have a bunch of eunuchs heading the party when we should have leadership. We need to call out Democrats on every single instance of fraud, lying and theft. Sites like Breitbart and LI and others do it but no one in our party does, and it’s sickening.

“…..and signed an agreement never to investigate any accusations of Democrat fraud.”

There, in a nutshell, is a perfect example of how stupid and dull-witted the ‘pubs are. Would the ‘rats EVER have signed such an agreement? OF COURSE NOT. The ‘pubs should just ignore it and go for it anyway. But they won’t. Cowards. They try to hide their cowardice behind “honor” and “fairness”, but they’re really just too dim, slow and frightened to press their advantage when they have it. We’re seeing it again in this election, especially in several of the senate races.

The agreement you mention was almost as stupid as Trent Lott’s “power-sharing” deal with the ‘rats. Disgustingly weak and stupid, stupid, stupid.

I just did a post about using old yard signs as target stands for plinking and target shooting. I guess this guy just started a little too early collecting them.

The best way to stop this is to elect her opponent and arrest her husband.

Liberals only understand power and losing power gets their attention in a way that nothing else would.

True dat. But relying on the courts, especially given that time is of the essence in election matters, is getting iffier and iffier as judicial appointments become more and more political. No longer do elected ‘rat nominating officials seek judicial appointees who are fair, impartial, rational, and devoted to law and ethical conduct, but rather are political hacks whose appointments are understood to be an opportunity to manipulate the law to the ‘rats favor. We’ve seen the bias, the foot-fragging and the arbitrary exclusion of vote fraud evidence spun by these judges who need only be presented with most anything by the ‘rats that they can dubiously hang their hats on in deciding in favor of the ‘rats.

If we really want justice, fairness and sanity restored, I believe we have reached the point where we need to rolls up out sleeves, arm as necessary, and take the fight to them. Always being on the defense and the one who must prove the facts over and over in tedious, blurry-eyed, green eye-shade tasks as the ‘rats run out the clock has not worked since Bush v. Gore and that wasn’t a full win.

‘Pubs need to grow a pair and take the offensive position and arrest it o the ground before it happens, not just react and file some crap in court that drags on while the ‘rat is sworn in.

Obama told them to do what ever they need to do – is that a dog whistle? Is he promising no consequences for voter fraud? Is that whey they are being so blatant about it?

Long should be prosecuted with civil rights violations.

Seeing that Long is a ‘rat, I’m surprised he didn’t replace the signs with IEDs.

Stealing opponents’ campaign materials goes back hundreds of years in the US, so this is hardly unusual. This is a sub-meme on the internet every election cycle: campaign sign theft by ironic perps, sometimes by the actual opponent. It goes on all the way down to middle school class president elections.

With this guy, the political damage to his candidate wife is done and unfixable by Tuesday. The guy is married to a liberal Democrat politician – hasn’t he suffered enough? Fine him in court next month and give him a weekend in county – respite from his wife’s anger, because brother, you know he is catching hell like no judge could impose.

I’m not going to lie, I did this back in college. At a party and a friend dared me to go swipe one of the few Clinton/Gore signs in Joplin, Missouri. Do you have any idea how hard it is to fit a 4’x8′ sign into a 1988 Thunderbird?

Anyway, I can’t cast the first stone at this guy but I will say that he appears older than I and at 40, I’m damned sure old enough to know better (but at 18, I was not!)

If the dude wasn’t a libtard ‘rat himself, he wouldn’t have been out stealing signs to begin with.

But maybe she’s so mad at him for getting caught she pummels him and then she bashes him with a lamp, which lands her in jail for domestic violence.

So there could be an even happier ending.

Or the dude may have to hire a ‘taster’.