“Democrats are starting to play the blame game as they face the possibility of losing the Senate in November.” 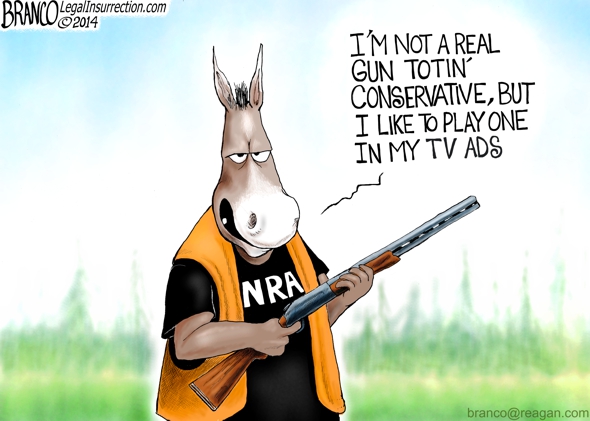 We’re a month away from the midterm election that could hand control of the Senate to Republicans. As with any election, there are lots of moving parts and no one is absolutely sure what’s going to happen.

Even so, Alexander Bolton of The Hill is reporting that panicked Democrats are already blaming each other for an expected loss:

Democrats are starting to play the blame game as they face the possibility of losing the Senate in November.

Tempers are running high a month out from Election Day, with polls showing Democratic candidates trailing in the crucial battleground states that will decide whether control of Congress flips to Republicans.

Pro-immigrant advocacy groups, meanwhile, are saying Democrats should not blame them if Latino voters don’t turn up to the polls on Election Day. They say President Obama made a tactical blunder by postponing an executive order easing deportations.

And grassroots organizers are grumbling about Alison Lundergan Grimes’s (D-Ky.) bid to take down Senate Minority Leader Mitch McConnell (R-Ky.), arguing her campaign has been disorganized.

“I used to work in the Democratic caucus and some of the toughest shootouts we ever engaged in were when we stood in a circle and fired at each other. I think you see a little bit of that now,” he said.

Alex Isenstadt of Politico notes a change in strategy for Democrats in the House:

House Democrats, facing strong political headwinds, are shifting millions of dollars of TV advertising away from 2014 challengers in order to prop up some of their most vulnerable incumbents.

The Democratic Congressional Campaign Committee is scaling back on planned commercial airtime in 11 Republican-held districts, the group said Monday. Those resources will be used to help four Democratic lawmakers facing treacherous reelection campaigns and two other candidates in districts that Democrats are trying to win from Republicans.

The spending decisions come four weeks before a midterm election that is proving perilous to Democrats, who are 17 seats deep into the House minority and are almost certain to see their delegation shrink further.

All that being said, the GOP should take nothing for granted and neither should we.

I love it when Collectivists turn and devour each other. The sound is like a sweet, sweet symphony of schadenfreude.

And they always do – cause that is how the get their jollies – attacking people.

“they” get their jollies.

Reminds me of watching players bickering with each other when they’re down 21 in the 4th qtr.

If there’s any way for the GOP to screw this up, they will.

My biggest concern, too. And it will only take a few well timed questions from the media of some GOP candidates to shift a few key races. Hopefully incidences like the Todd Aiken interview have taught modern candidates how to deal and not go off script.

The one thing we’ve been able to rely on the GOP for during the last two decades is their uncanny and unsurpassed ability to snatch defeat from the jaws of victory.

The media will now step in, find and twist something these candidates say all to stupidly and willingly, and the media will run with it.

No GOP candidate should ever be considered a winner until they’re actually sworn into office. The ‘rats have been known to challenge elections right up to that moment. Would a ‘pub EVER do this? Hell no. They just crawl away, whimpering, looking for a dark, quiet place to bed down in the fetal position, no matter how vast the ‘rat voter fraud was.

No GOP candidate should be considered a winner until he does what the voters elected him to do.

I see damned few winners in the GOP right now.

I love that cartoon of Mitch McConnell.

They wrote a whole article about you. But we knew this already.

Interesting. There are SEVERAL articles written about you and your collective:

We all know you are a historic idiot (Boy! Is THAT true on several levels!!!), but your Collective tried that same bullshit in both its Nazi and Soviet iterations.

People who refused to see the wonderfulness of the Collective were crazy, because Collectivism was scientifically divine. Because…shut up!

Now, you, on the other hand, are a sick phuc, as everyone here knows. Even you.

Right on cue, the Clownselor REACTS! No refutation. Just reaction.

No, HoneyCheeks. You WERE refuted. You just don’t have the snap to know when you’ve been punked.

Must be the calluses…

How original! You thought of that all by yourself didn’t you? If you had a bit more sense you’d be a half-wit.

Wow, you are almost as adept as the Clownselor at hurling ad hominem instead of actually offering a substantive response. We know that you aren’t typically exposed to anything that is not sanitized by your collective’s propaganda tentacles. So, we’ll be more patient with you than with the Clownselor.

Find yourself a clue. They can be found here:

Of course, you’ll already have it bookmarked.

Gus, you seriously beclown yourself every time you trot out that ‘collective’ tripe. Take a few minutes and read up on the definition of the words ‘collectivism’ and ‘individualism.’

I can assure you, the party that gushes over Hillary ‘It Takes A Village’ Clinton and Barry ‘The Alinskyite’ Soetero are the collectivists.

“No, HoneyCheeks. You WERE refuted. You just don’t have the snap to know when you’ve been punked.”

Oh, right, I forgot that you consider logical fallacies (lies) to be refutations. Such is not unusual for lightweights.

No, Guz. I don’t lie. But let’s explore that ambit a bit.

One of the terms of service is that you tell Prof. Jacobson the truth about who you are.

“By using the Website and Services you represent and acknowledge that you are at least 18 years old and you agree: (a) to provide true, accurate, current and complete information about yourself as prompted by the registration form, and (b) to maintain and update this information to keep it true, accurate, current and complete. If any information provided by you is untrue, inaccurate, not current or incomplete, Insurrection reserves the right to terminate your account and refuse to you any and all current or future use of the Services.”

We know you lied, and we know you lie as a matter of course. You were banned here as “Gus” for being nothing but a Collectivist troll. You reappeared as “Tex”, another of your suck-puppets, to continue trolling. Everything you say or do here is predicated on your lies. This is really very typical of your Collective. You live, love, and make lies. It is how you function, and the first lies you tell are the ones that you tell yourself.

I find you useful as a foil, as you know. One of the things I use you for is to demonstrate your ilk. You commonly invert the truth, as we have seen here on this thread.

I just thought we should clear up what is true, and what is a lie, and who is the liar.

Once we get past your farting REACTIONS, preening declarations, and faux-intellectual treatises, what we’re left with, as always, is your admission that you have no substantive rebuttal to the links I provided.

That, naturally, is another lie. And you are a confirmed liar.

I expect you will be leaving this space very soon.