Cornell Deer Sterilization Fiasco: “you can’t make this stuff up”

Cornell Deer Sterilization Fiasco: “you can’t make this stuff up”

My interview on Cam & Co. on NRA News. 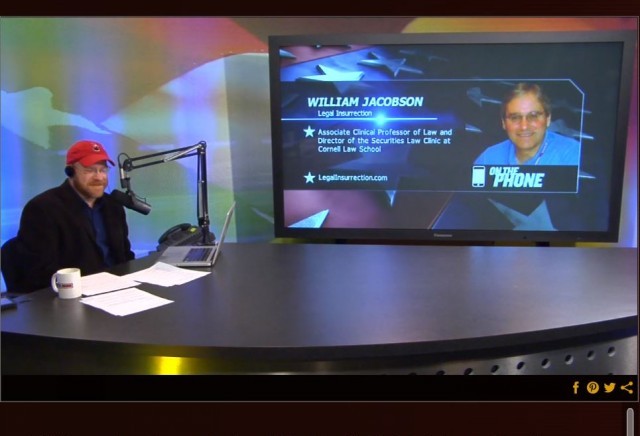 This goes to show you that you never can predict which posts will gain traction.

My post Cornell gives deer tubal ligations, everything goes wrong, was meant to be a somewhat humorous take on a bizarre sequence of events. Tubal ligations and ovariectamies performed on does were just the half of it.

The post struck a cord, perhaps because the story served as a metaphor for other failed liberal policies.

The post has been viewed about 23,000 times, and generated a lot of comments in itself and on Facebook.

It also caught the attention of Cam Edwards at NRA News, who had me on his show to talk about it:

[Note: The title in the chyron should not have the word “Associate” in it.]

“You can’t make this up.”
You can but no one will believe you.

JackRussellTerrierist in reply to MouseTheLuckyDog. | October 22, 2014 at 3:05 am

I still don’t understand why these bucks aren’t up on rape charges. Does the doe going into estrus equate to a written contract of consent? I mean, we ARE talking about a college campus.

Not just Cornell. Cayuga Heights and City of Ithaca, but I suppose those are extensions of Cornell. But please, Prof, “strike a chord.”

The greater Cornell community will continue on their mission until they are at the door step of having an epidemic of “unintended consequences” with the spread of “Chronic Wasting Disease” due to starvation by absence of natural habitat and over population in a small area. A highly infectious disease to their species and other wild life which does not honor Cornell property boundaries. At what cost do you give a liberal politically correct program priority over killing “Bambi” and to reverse what has been allowed and perpetuated to happen. It has to be a progressive mentality to believe this approach is a kinder, gentler and more human thing to do to animals in the wild.

I’ve already shamelessly included this post as a perfect example of unintended consequences resulting from poor information and preconceived notions in a presentation about tactical decision making for civilian concealed carry permit holders. The optic of lusty bucks traveling to the Cornell campus from far and wide in pursuit of eternally ovulating but never impregnating does really sticks in the mind – not to mention Rags crack about show tunes in the moonlight should the University have chosen another path. Great stuff.

This story about the rise in deer related accidents involving jets and planes caught my eye several days ago.

The statistics about the deer population were so unbelievable that I wondered about the accuracy. They claim the white tail deer population in the U.S. has increased from 350,000 in the year 1900 to over 28 million today.

Ah, bring on the wolves! Of course, soon, how soon is an open question, the deer herd will collapse due to disease or hunger with spill over diseases to domestic animals (Humans, never say the expert deer lovers”).

Isle Royale should be studied by Cornell’s deer lovers as to unintended consequences from over population of a local herd; it that case, first Moose then wolves.

Can this be viewed as an extension of the campus “rape culture”? Do the bucks know about “yes means yes”?

The same thing happened in suburban Maryland about 20 years ago. After exhausting all the typical liberal ideas – including at least a proposal to set up salt licks laden with contraceptives – I think they relented and allowed limited hunting to cull the herd.

Development has removed virtually all natural predators from deer, which were mainly wolves and big cats. They now reproduce until their numbers lead to starvation, disease, or both. Sensible hunting is the only humane way to keep the population in check.

We have coyotes in abundance here in eastern Iowa. They do an excellent job of keeping the deer population down.

Development has removed virtually all natural predators from mankind, which were mainly carnivores and other humans. They now reproduce until their numbers lead to starvation, disease, or both.

I’m sorry I was just reading that and for some reason this is what I saw.

The thought is disturbing.

Bring the predators back and sic them on these insane libs.