Association with Obama proving toxic at the polls. 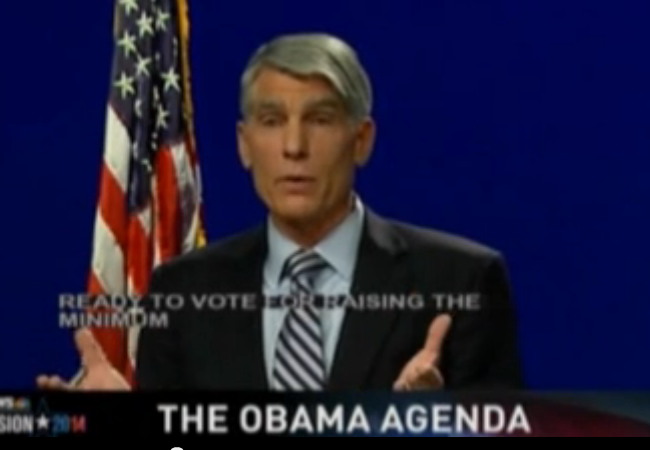 In a recent debate, Colorado Democrat Mark Udall was asked which of Obama’s policies he would oppose if elected.

He couldn’t name one.

Here’s a video by the Washington Free Beacon:

Udall’s campaign has focused on the tired Democratic Party meme of the war on women, earning him the nickname “Mark Uterus.”

Mark Udall has been dubbed ‘Mark Uterus’ on the campaign trail. That’s a problem.

Colorado Democratic Sen. Mark Udall has talked about contraception and abortion more than just about any other 2014 candidate. Roughly half of his ads are about women’s issues. The focus has been so intense that Udall has been nicknamed “Mark Uterus,” with local reporter Lynn Bartels of the Denver Post joking that if the race were a movie, it would be set in a gynecologist’s office. In a debate between Udall and Rep. Cory Gardner last week, Bartels, who moderated, used the moniker to describe him.

Udall’s campaign has been so shallow that the editors of the Denver Post have endorsed his Republican challenger, Cory Gardner.

This is change you can believe in:

Congress is hardly functioning these days. It can’t pass legislation that is controversial and it often can’t even pass legislation on which there is broad agreement. Its reputation is abysmal, and even its members rarely dispute the popular indictment.

It needs fresh leadership, energy and ideas, and Cory Gardner can help provide them in the U.S. Senate.

In every position the Yuma Republican has held over the years — from the state legislature to U.S. House of Representatives — he has quickly become someone to be reckoned with and whose words carry weight. An analysis on ABC News’ website, for example, singled out Gardner a year ago — before he declared for the Senate — as one of the party’s “rising stars” who represented “a new generation of talent” and who had become a “go-to” member of leadership.

And this was about someone who wasn’t elected to Congress until 2010. Nor is Gardner a political time-server interested only in professional security. He is giving up a safe seat in the House to challenge a one-term Senate incumbent, Democrat Mark Udall, in what is typically an uphill effort.

It’s time for a change.

And it looks increasingly likely that will happen:

Update (WAJ): Well, this is embarrassing:

Apparently, this guy said he thinks DC should “move on” from Benghazi because it’s a “non-issue”….nothing to see here, move along…

For that alone, I hope he LOSES!! Big BIG loss!

This post just provides more reasons he NEEDS to lose that Senate seat.

Udall needs to win this seat. COLORADO needs for him to lose it.

In normal times, Cory would be at a huge disadvantage in challenging an incumbent senator.

But these are NOT normal times. Americans are fed up, worried, and provoked.

This is what I’ve said for a while (and you too) as the left & media have tried to damage the Tea Party ‘brand’, worrying conservatives in the process. We’ve said all that doesn’t matter because the basic values and principles that created the Tea Party remain strong and growing regardless of how individual TP orgs are faring.

It is with those basic values that the American people are drawing red lines in the sand against leftism, liberalism, progressivism, etc.

It is the rise of what we might call the Not So Silent Majority of Americans who still have a brain in their heads and a heart in their chests.

I’ve said from the git-go that the TEA party IMPULSE (never a ‘party’) was an amorphous movement, and was composed of ordinary people with often conflicting (including self-conflicting) views, but who had a felt sense that we as a nation were moving at increasing velocity in the WRONG direction.

I also predicted that interested people would try hard to co-opt the energy of the IMPULSE, which, of course, has happened. Some of them were well-motivated, some had very dark motives. Some of them were good starting out, but have gone the way of power and money. Duh.

But the IMPULSE was, and remains, correct. It HAS resulted in the election of some really fine people. I am proud to associate with it. And I will be as long as it follows its original, fundamental direction…AWAY from BIG GOVERNMENT and toward returning to Constitutional values.

To infinity and beyond! my brutha!

Anyone who cannot find even one Obama policy to disagree with is either a hopeless political hack incapable of independent thought or a traitor who also wants to fundamentally change America into a minor provence of the New World Order. I suspect it’s the latter.

It is the sign of a machine member, a party hack who blindly follows nat’l party directives, among them support your president no matter what.

The next president, at a time when he/she is politically strong early on, should put out a couple minor issue positions that are purposefully bad just to give down ticket candidates something to pretend to be against with their own president. This is so cynically dishonest I expect it will actually happen.

It really is significant the the Post endorsed the Republican. They were, while there were two papers in town, the reliable Dem paper and the News the more Repub leaning one. Most of the Post’s columnists and opinion writers are still well to the left.

That’s a common dynamic in a lot of cities large enough to support two major newspapers – one liberal, the other more conservative. In Detroit it’s the uber-liberal Free Press versus the more centrist Detroit News.
(Only one paper here in Possum Holler NC. It’s liberal but it don’t matter on account o’ half o’ us here’bouts cain’t read).

Seems like ‘journalism’ and ‘news reporting’ have divided the market along political lines since forever, which is interesting.