Why is Politico carrying water for Democrats? 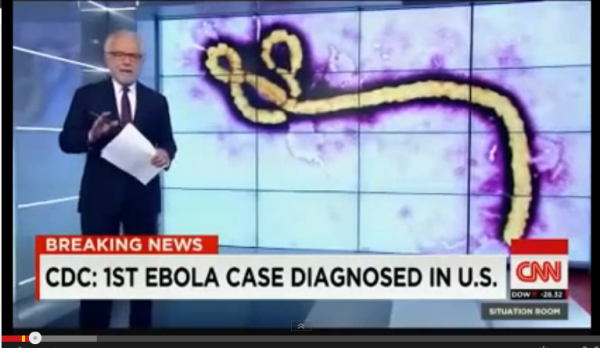 Americans’ fears about the spread of Ebola are growing, and the constant debunking of the Obama Administrations’ claims regarding the severity of the situation haven’t done much to gain the confidence of the public.

Dan Nather of Politico doesn’t seem to have a firm grasp on the reality of the current situation:

For once, President Barack Obama and Texas Gov. Rick Perry are on the same page. At separate briefings on the Ebola crisis, Obama administration officials and Perry have delivered the same message: Don’t panic — the health authorities know what they’re doing.

But for other Republicans — and conservative media outlets — it’s time for panic.

The likely 2016 Republican presidential candidates — except for Perry — are practically lining up to warn that the Obama administration isn’t doing enough to keep Ebola out of the United States, now that Dallas is dealing with the nation’s first confirmed case.

Sen. Rand Paul of Kentucky declared on “The Laura Ingraham Show” that “this could get beyond our control” and worried, “Can you imagine if a whole ship full of our soldiers catch Ebola?”

Sen. Ted Cruz — Perry’s Texas colleague — raised the prospect of restricting or banning flights to the West African countries that are hardest hit by the disease, noting in a letter to the Federal Aviation Administration that some African nations and certain airlines have already imposed their own flight bans.

Not everyone is buying what Politico is selling. Stephen Kruiser of the PJ Tatler makes an excellent point:

None of what was mentioned above is “panic.” Each is a real-world, rational way of dealing with the problem. At this stage, some may be more premature than others. However, some of us are beginning to a) think the government may not be truthful about what is going on and/or b) isn’t competent enough to react properly even if it isn’t.

If anyone is mildly panicking, it is solely because the Dallas situation has been mishandled in many ways and we were assured recently that the situation wasn’t going to happen anyway.

Kudos, however, to Politico for carrying some water for the administration in advance.

Call me crazy, but I have a hard time taking reassurances from the same people who promised I could keep my healthcare plan if I liked it.

You cannot say this disease is hard to catch, and then also say that it has killed so many health care workers that the local system has collapsed, without some blow-back.

They are still saying this virus is as hard to catch as HIV, and yet we never saw doctors and nurses dying in droves from HIV infection.

Valerie, you must have missed the part where Sub-Saharan Africa has MILLIONS of orphans due to the effect of AIDS on their adult population (or the effect in the Western world’s population of poofs and drug users).

Ebola and HIV are transferred the SAME way – exchange of body fluids. But the HIV is a FAR more fragile virus than Ebola! Where HIV requires blood-to-blood, Ebola can survive sweat-to-sweat.

The most disturbing part of Ebola in the U.S. is that it is becoming the SECOND communicable disease in history with its own PC branding, and THAT will mean we can count on it being “Rotherham-ed”.

It is already apparent that common-sense public health policy is being ignored…or worse…labeled racist, etc.

That crap has to be nipped in the bud, and we need to be very carefully VOCAL and intolerant of that crazy strain of “tolerance”.

Excellent point. And, the reality is that we can no longer enforce quarantines of countries in Africa or South America because to do so would be racist.

Plans to quarantine even healthy Americans ( no judicial recourse ). Since when has “habeas corpus” been suspended. Not one mention of State Department suspending travel visa from the hot zone…

“In other words, you don’t have to be sick to be detained. Just suspected by health officials of having been in contact with someone who might have had the disease.

The regulations say a person “may be detained for such time and in such manner as may be reasonably necessary.” Is that three days or thirty? There are no rules.”

Rush is right: everything is political to these tools!! It’s all about PC and political destruction of “the target”. Always.

I wish there was a way to stop Ebola from infecting those of us who are sanely calling for quarantines, flight and other travel restrictions to and from the “hot zone” countries, and other basic, logical “old fashioned” hygiene and protective precautions.

If it wasn’t so terrifying and deadly, this could be hilarious satire. If only.

This sounds remarkably like the forest fire policy that led to huge swatches of charred United States forests.

Do we really want to “let it burn?”

We’ll cure anyone of ebola at no cost. They just have to get to America. The biggest obstacle? Getting out of their home country.

Things to ponder: The Dallas family affected by Ebola was said to have hygenic problems. They lived in an apartment complex, most likely which houses more family with hygenic problems. We know animals can harbor the virus and can be spread to humans through them. Question: can the virus be harbored in vermin that frequent that apartment complex and be carried from dwelling to dwelling? Roaches, mice, ants, flies, fleas? Viruses are very small and this one thrives in liquid and dry materials for hours, perhaps days. Think bubonic plague which is spread by a host flea carried about by its own host, the wild rodent.

It’s not known whether rats, mice and fleas could be involved in the transmission of ebola. If it is then we’ll know soon enough. Or too late.

“Why is Politico carrying water for Democrats?”

Because that is its Raison d’etre.

Honestly, it was started by “journalists” employed by the WaPo.

Why should anyone be surprised?